Voice is of two types:

1. Active Voice: A verb is said to be active voice when it expresses an action performed by its subject.

Example: I eat a mango. Here the action (eat a mango) is performed by the subject (I).

2. I have written a letter.

3. She lost her purse yesterday.

4. They were cleaning the room.

7. He will have written a letter.

8. We were raising the funds.

10. She has trolled the haters.

2. Passive Voice: A verb is said to be passive voice when the action it expresses is performed upon its subject (in the objective form).

2. A letter has been written by me.

3. Her purse was lost yesterday by her.

4. The room was being cleaned by them.

6. The match will be played by us.

7. A letter will have been written by him.

9. These cookies were baked at the grocery store bakery. 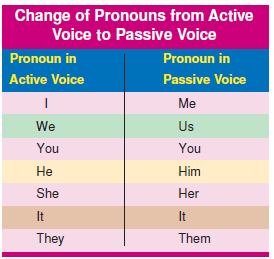 Ans: The savannah is roamed by beautiful giraffes.

Ans: The flat tire was changed by Sue.

3. We are going to watch a movie tonight.

Ans: A movie is going to be watched by us tonight.

4. I ran the obstacle course in record time.

Ans: The obstacle course was run by me in record time.

5. The crew paved the entire stretch of highway.

Ans: The entire stretch of highway was paved by the crew.

6. The choir really enjoys that piece.

Ans: That piece is really enjoyed by the choir.

Ans: The whole suburb was destroyed by a forest fire.

8. The two kings are signing the treaty.

Ans: The treaty is being signed by the two kings.

9. The cleaning crew vacuums and dusts the office every night.

Ans: Every night, the office is vacuumed and dusted by the cleaning crew.

Ans: Money was generously donated to the homeless shelter by Larry.

11. The homeowners remodelled the house to help it sell.

Ans: The house was remodelled by the homeowners to help it sell.

12. The saltwater corroded the metal beams.

Ans: The metal beams were corroded by the saltwater.

13. The kangaroo carried her baby in her pouch.

Ans: The baby was carried by the kangaroo in her pouch.

14. They looted the shop and took away the money.

Ans: The shop was looted and the money was taken away.

15. They asked Johan why he accepted the money.

Ans: Johan was asked why the money was accepted by him.

Ans: She was seen to sing a song.

Ans: He was seen to go out.

1. The novel was read by Mom in one day.

Ans: Mom read the novel in one day.

2. The house will be cleaned by me every Saturday.

Ans: I will clean the house every Saturday.

3. The staff are required by the company to watch a safety video every year.

Ans: The company requires staff to watch a safety video every year.

4. The entire house was painted by Tom.

5. The students' questions are always answered by the teacher.

6. All the reservations are being made by the wedding planner.

Ans: The wedding planner is making all the reservations.

7. Two dozen cupcakes will be baked by Susan for the bake sale.

8. The comet was viewed by the science class.

9. Instructions will be given to you by the director.

Ans: The director will give you instructions.

10. The Grand Canyon is visited by thousands of tourists every year.

Ans: Thousands of tourists visit the Grand Canyon every year.

Ans: It’s time to do the work.

Ans: The news surprised me.

15. The Joker was laughed at by the boys.

Ans: The boys laughed at the joker.

Ans: I may slap you.

Ans: Whom did you invite?

18. By whom was this book written?

Ans: Who wrote this book? 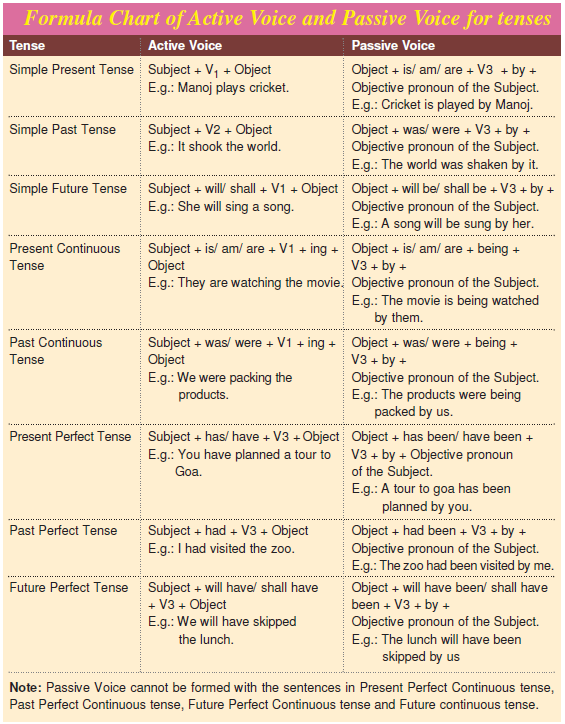