2. The decreasing order of boiling points is
A: n-Pentane > iso-Pentane > neo-Pentane

3. To prepare a pure sample of n-hexane using sodium metal as one reactant, the other reactant will be
A: n-propyl bromide
Solution:

4. In the preparation of Grignard reagent from haloalkane, the metal
A: Mg

5. Sodium acetate can be converted to ethane by
A: Electrolysing its aqueous solution
Solution:

6. Which of the following compounds is used in antiknock compositions to prevent the deposition of oxides of lead on spark plug, combustion chamber and exhaust pipe
(a) Glycerol       (b) Glycol      (c) 1, 2-dibromoethane      (d) Benzene
A: 1, 2-dibromoethane
Solution:

As leaded gasoline burns, lead metal gets deposited in the engine which is removed by adding ethylene dibromide. The lead bromide is volatile and is carried off with the exhaust gases from the engine

, the product called
A: Wurtz reaction

9. Iodoethane reacts with sodium in the presence of dry ether. The product is
A: Butane
Solution:

10. Which of the following is oxidised by KMnO4
A: Isobutane
Solution:

11. Which of the following has maximum stability

12. The most volatile compound is
A: 2, 2-dimethyl propane

13. In Wurtz reaction, the reagent used is
A: Na/dry ether
Solution:

17. Which of the following reactions will not give propane 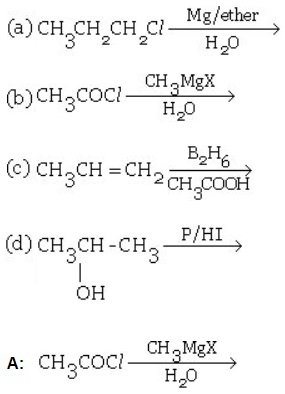 18. The shape of methane molecule is
A: Tetrahedral
Solution:

20. Kerosene is used as fuel because it is
A: More volatile

23. Petroleum refining is
A: Distillation of petroleum to get different fractions

24. The chemical added to leaded petrol to prevent the deposition of lead in the combustion chamber is
A: Ethylene dibromide

28. Which gives CH4 when treated with water
A: Aluminium carbide
Solution:

31. A reaction between methyl magnesium bromide and ethyl alcohol gives
A: Methane

32. Methane and ethane both can be obtained in single step from
A: CH3I
Solution:

33. Paraffin wax is
A: Saturated hydrocarbon

34. The number of possible enantiomeric pairs that can be produced during monochlorination of 2-methylbutane is
A: 2

39. In the preparation of alkanes; a concentrated aqueous solution of sodium or potassium salts of saturated carboxylic acid are subjected to
A: Electrolysis
Solution:

40. Halogenation of alkanes is an example of
A: Free-radical substitution

41. Propionic acid is subjected to reduction with hydroiodic acid in the presence of a little P, the product formed is
A: Propane
Solution:

42. When ethyl iodide and propyl iodide react with Na in the presence of ether, they form
A: Three alkanes
Solution:

43. The alkane that yields two isomeric monobromo derivatives is
A: Propane

44. Kerosene is a mixture of
A: Alkanes

45. When petroleum is heated the vapours contain mainly
A: Petroleum ether

46. Iso-octane is mixed to the petrol
A: As an antiknock

47. Tetraethyl lead is used as
A: Petroleum additive

50. Which compound is not inflammable
A: CH4

52. The organic compound used as antiknock agent in petroleum is
A: (C2H5)4pb

In presence of alc. KOH dehydrohalogenation occur and alkene is formed.

58. Carbon black, which is used in making printer's ink, is obtained by decomposition of
A: Methane

It contains 98-99% carbon. It is used in making black ink, paints and shoe polishes.

59. The addition of tetraethyl lead to petrol
A: Raises its octane number
Solution: Tetraethyl lead is anti-knocking agent it increases the octane no. of the fuel.

61. Knocking sound occurs in engine when fuel
A: Ignites rapidly
Solution: Knocking - Sudden and irregular burning of the fuel mixture causing jerks against the piston and gives rise to violent sound. This is known as knocking.

62. Petroleum is mainly a mixture of
A: Alkanes

Solution: Ethane does not decolourise bromine solution because it is a saturated compound.

70. The preparation of ethane by electrolysis of aqueous solution of potassium acetate is called as
A: Kolbe's synthesis
Solution:

73. In the fractional distillation of crude petroleum
A: High boiling constituents condense at the bottom of the column

Solution: The enthalpy of combustion i.e., H is always negative. It means combustion is an exothermic reaction.

75. Gasoline is the name of
A: The gaseous constituents of petroleum

79. What is the chief product obtained when n-butane is treated with bromine in the presence of light at 130ºC
A:

2-Bromobutane is the main product because
2º carbonium ion is more stable than 1º.

80. A mixture of propene and methane is obtained by the cracking of
A: n-butane
Solution:

84. A liquid hydrocarbon can be converted to gaseous hydrocarbon by
A: Cracking
Solution:

85. The tetrahedral nature of carbon was first given by
A: Le Bell and Van't Hoff

86. Formation of alkane by the action of Zn on alkyl halide is called
A: Frankland's reaction

88. Name the hydrocarbon that is a liquid at STP
A: n-pentane

89. Which statement is not true concerning alkanes
A: Large number alkanes are soluble in water

90. Fischer Tropsch process is used for the manufacture of
A: Synthetic petrol

93. Sodium ethoxide is a specific reagent for
A: Dehydrohalogenation
Solution:

97. Sample of 2, 3-dibromo-3-methylpentane is heated with zinc dust. The resulting product is isolated and heated with HI in the presence of phosphorus. Indicate which is the structure that represent the final organic product formed in the reaction
A:

99. When sodium propionate is heated with soda lime, the main product is
A: Ethane
Solution:

100. Gasoline is a mixture of alkanes with the number of carbon atoms
A: C7 - C9
Solution: Gasoline or petrol composition C7 - C12.

101. The final product of complete oxidation of hydrocarbons is
A: H2O + CO2
Solution:

All hydrocarbons saturated or unsaturated on complete combustion always produce CO2 and H2O.

Replaceable hydrogen atoms are present only on 4 primary carbon atoms. Hence, it gives only are monochloro Substituted product.

108. A mixture of methane, ethylene and acetylene gases is passed through a Wolf's bottle containing ammoniacal cuprous chloride. The gas coming out is
A: A mixture of methane and ethylene
Solution: Acetylene reacts with ammonical cuprous chloride to form red ppt. of copper acetylide while methane and ethylene do not react (since they do not have acidic hydrogen) They come out from the bottle

112. The inorganic origin of petroleum is indicated by the fact that
A: Carbon and hydrocarbon can combine by absorption of solar energy to give hydrocarbons

116. By Wurtz reaction, a mixture of methyliodide and ethyliodide gives
A: A mixture of the above three
Solution: All - butane, Ethane and Propane are possible in this reaction.

Solution: Marsh gas, Natural gas and coal gas contains CH4 but producer gas is a mixture of Co and N2

122. A mixture of ethyl iodide and n-propyl iodide is subjected to Wurtz reaction. The hydrocarbon that will not be formed is
A: n-propane

125. In the dichlorination reaction of propane, mixture of products are obtained. How many isomers, the mixture contains
A: 4

126. Which of the following cycloalkane gives open chain compound, when reacts with bromine
(a) Cyclopropane     (b) Cyclopentane     (c) Cyclohexane     (d) Cyclo-octane
A: Cyclopropane

127. Grignard reagent is not prepared in aqueous medium but prepared; in ether medium because the reagent
A: Reacts with water

129. For the reduction of ketones to hydrocarbon, the appropriate agent is
A: Zn - Hg/HCl

130. Heating of alkanes with fuming sulphuric acid or oleum at high temperature, which forms sulphonic acid, is called
A: Sulphonation

131. Propane is obtained from propene by which method ?
A: Catalyst hydrogenation
Solution:

132. B.P. of branched chain alkanes as compared to straight chain alkanes are
A: Lower
Solution:
As the number of branches increases, surface area decreases, due to which Vander Waal forces of attraction decreases. Hence, boiling point also decreases.

is an example of
A: Substitution reaction

135. Normal butane convert into isobutane by
A: AlCl3
Solution:

136. Alcoholic solution of KOH is used for
A: Dehydrohalogenation

137. Aluminium carbide on reacting with water gives
A: Methane
Solution:

139. Which of the following reaction is expected to readily give a hydrocarbon product in good yields
(a)

141. The marsh gas detector used by miners works on the principle of
A: Difference in the rates of diffusion of gases

142. Methane can be prepared by
A: Decarboxylation
Solution:

143. The most strained cycloalkane is
A: Cyclopropane
Solution:

Cyclopropane with a bond angle of 60º is very strained and hence very reactive.

144. Which does not react with chlorine in dark
A: CH4

145. Main constituent of marsh gas is

147. Which hydrocarbon will be most stable
A: Butane

Solution: Propane is a saturated compound. Ozonide is formed only by alkenes or alkynes 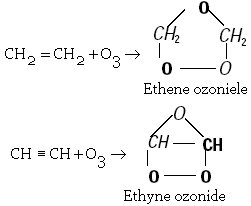 150. Which type of hybridisation occurs in ethylene
A: SP2
Solution:

151. Silver acetylide when heated with HCl gives
A: C2H2
Solution:

152. When sodium reacts with ethyl iodide, which of the following hydrocarbons is produced
A: Butane
Solution:

153. Solid methane is
A: Molecular solid

154. The shape of ethane is
A: Tetrahedra
Solution: All the C - C bond are single bonds. Hence SP3 -hybridization and tetrahedral structure.

Alkyl group of Grignard’s reagent is involved in the formation of alkane.

158. Successive alkanes differ by
A:

160. Methane and ethane both can be prepared in one step by which of the following compound
A: CH3Br
Solution:

162. A petroleum fraction having boiling range 70-200°C and containing 6-10 carbon atoms per molecule is called
A: Gasoline

173. 2-Methylbutane on reacting with bromine in the presence of sunlight gives mainly
A: 2-bromo-2-methylbutane
Solution:

174. Of the five isomeric hexanes, the isomer which can give two monochlorinated compounds is
A: 2, 3-dimethylbutane
Solution:

175. The product obtained on reaction of C2H5Cl with hydrogen over palladium carbon is
A: C2H6
Solution:

This reaction is used for the preparation of pure alkanes.