Section Formula
Let A(x1, y1), B(x2, y2) be any two points in the plane, the coordinates of the point which divides

* The division is called Internal if

is positive and External if

is negative.
* The area of  where

Median and Centroid
In a triangle the line segment joining a vertex to the mid point of the opposite side is called Median and the point of concurrency of Medians is called Centroid.
If A(x1, y1), B(x2, y2), C(x3, y3) are the vertices of triangle, then the centroid of ∆ ABC 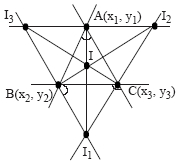 Orthocenter and Altitudes
In a triangle the perpendicular from a vertex to the opposite side is called Altitude and point of concurrency is called Orthocentre.
Perpendicular bisector of sides - Circumcenter 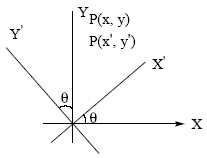 The perpendicular bisector of sides are concurrent and the point of concurrency is called Circumcenter.
Let P(x, y) be a point in the original co-ordinate system.
If the axes are rotated through an angle '

* If the origin is shifted to (h, k) and then the axes are rotated through an angle '

The transformation obtained by shifting the origin to a given different point in the plane without changing the directions of coordinate axes there in is called as translation of axes.
Let P(x, y) be a point in original coordinate system. If we shift the origin to the point O'(h, k), then new coordinates of the point P are (x', y').

* Rotation of axes
The transformation obtained by rotating both the coordinate axes in the plane by an equal angle without changing the position of the origin is called rotation of axes.