4. Vectors are completely described by a number with a unit followed by a statement of direction.
5. Angle can be considered as vector if it is small. Large angles can not be treated as vectors as they do not obey laws of vector addition.

6. Surface area can be treated both as a scalar and a vector. A is magnitude of surface area which is a scalar. This area is enclosed by a closed curve as shown if  is a unit vector normal to the surface, we can write  as a vector.
Surface area is a vector.

7. Tensor is a physical quantity which will have different values along different directions.
e.g. Moment of inertia, stress.
8. A vector is represented by a directed line segment. The length of the line segment is proportional to the magnitude of the vector.
9. The magnitude or modulus of a vector (|

are vectors having the same magnitude and opposite direction.

is called the negative of

is a vector, the unit vector in the direction of

are units vectors along x, y and z axis.
22. Position vector : The vector which is used to specify the position of a point ‘P’ with respect to some fixed point ‘O’ is represented by

and is known as the position vector of ‘P’ with respect to ‘O’.

23. Real Vector or Polar Vector: If the direction of a vector is independent of the coordinate system., then it is called a polar vector. Example: linear velocity, linear momentum, force, etc.,
24. Pseudo or axial vectors : Axial vectors or pseudo vectors are those whose direction is fixed by convention and reverses in a mirror reflection. Cross product of two vectors gives an axial vector. eg : Torque, angular velocity, etc.
25. A vector remains unchanged when it is moved parallel to itself.
26. If m is a scalar and

a vector, then m

is a vector. Its magnitude is m times that of magnitude of

. Its direction is the same as that of

, if m is positive and opposite if m is negative,

s where s is scalar.

28. Vector multiplication obeys associative law when multiplier by a scalar

33. Triangle law : If two vectors are represented in magnitude and direction by the two sides of a triangle taken in order, then the third side taken in the reverse order represents their sum or resultant in magnitude as well as in direction.

34. If two vectors  are represented by the two sides of a parallelogram drawn from a point, then their resultant is represented in magnitude and direction by the diagonal of the parallelogram passing through that point.
R =

38. The magnitude of the resultant of two vectors of magnitudes a and b with arbitrary directions must be in the range (a – b) to (a + b).
39.

are two vectors which when added give a vector

40. If two vectors each of magnitude F act at a point, the magnitude of their resultant (R) depends on the anglebetween them.
R = 2Fcos(θ/2).

are unit vectors along X and Y axes, any vector lying in XOY plane can be represented as

is the resultant of all the vectors, then the components of

where θ is the angle made by the resultant with X – direction. 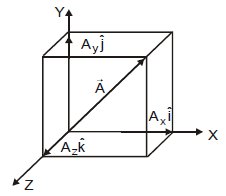 are unit vectors along X, Y and Z–axes, any vector in 3 dimensional space can be expressed as

Here Ax, Ay, Az are the components of

is body diagonal of the cube.

with X–axis, Y–axis and Z–axis respectively, then

where K is a scalar.

is equally inclined to the coordinate axes at an angle of 54.74°.

59. Equilibrium is the state of a body in which there is no acceleration i.e., net force acting on a body is zero.

60. The forces whose lines of action pass through a common point (called the point of concurrence) are called concurrent forces.

61. Resultant force is the single force which produces the same effect as a given system of forces acting simultaneously.

62. A force which when acting along with a given system of forces produces equilibrium is called the equilibrant.

63. Resultant and equilibrant have equal magnitude and opposite direction. They act along the same line and they are themselves in equilibrium.

64. Triangle law of forces : If a body is in equilibrium under the action of three coplanar forces, then these forces can be represented in magnitude as well as direction by the three sides of a triangle taken in order.

where p, q, r are sides of a triangle.

keep a body in equilibrium, then

68. N forces each of magnitude F are acting on a point and angle between any two adjacent forces is θ, then resultant force Fresultant =

69. BODY PULLED HORIZONTALLY :
i) A body is suspended by a string from a rigid support. It is pulled aside so that it makes an angle θ with the vertical by applying a horizontal force F. When the body is in equilibrium,
ii) Horizontal force, F = mgTanθ 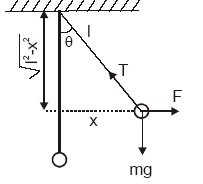 iii) Tension in the string,

, the resultant velocity is given by the following formulae.
a) If

are in the same direction, the resultant velocity will be

in the direction of

are in opposite direction, the magnitude of the resultant velocity will be

and acts in the direction of the greater velocity.

are mutually perpendicular, the resultant velocity will be

making an angle tan–1(v/u) with the direction of

.
i. If the boat is going down stream, the velocity of the boat relative to the ground,

.
ii. If the boat is going upstream, the velocity of the boat relative to the ground,

.
iii. If the boat is moving at right angles to the stream,

making an angle of tan−1(v1/v2) with the original direction of the motion.

72. MOTION OF A BOAT CROSSING THE RIVER IN SHORTEST TIME :
If

are the velocities of a boat and river flow respectively then to cross the river in shortest time, the boat is to be rowed across the river i.e., along normal to the banks of the river.

i) The direction of the resultant is θ = tan–1

with the normal or tan θ =

ii) Magnitude of the resultant velocity

iv) This time is independent of velocity of the river flow.

v) The distance travelled down stream = BC

73. MOTION OF A BOAT CROSSING THE RIVER IN SHORTEST DISTANCE :

iv) The time taken to cross the river is t =

are two vectors, then

is the negative vector of

In the parallelogram OMLN, the diagonal OL represents

and the diagonal NM represents

a) subtraction of vectors does not obey commutative law

b) subtraction of vectors does not obey Associative law

75. If two vectors each of magnitude ‘F’ act at a point, the magnitude of their difference depends on the angle ‘θ’ between then
Magnitude of difference of vectors = 2Fsin

are equal in magnitude but opposite in direction
d.

e. For two bodies moving in the same direction, relative velocity is equal to the difference of velocities. (θ = 0°.cos 0 = 1)

= VA + VB
g. If they move at right angle to each other, then the relative velocity =

77. Rain is falling vertically downwards with a velocity

and a person is travelling with a velocity

78. The direction of relative velocity (or) the angle with the vertical at which an umbrella

79. If the product of two vectors is another vector, such a product is called vector product or cross product.

80. If the product of two vectors is a scalar, then such a product is called scalar product or dot product.

DOT PRODUCT :
81. Dot product is the product of one vector and the component of another vector in its direction.
Eg: Magnetic flux, instantaneous power, work done, potential energy.

b) Scalar product is distributive i.e.,

and  are parallel vectors, then

are perpendicular to each other, then

are antiparallel vectors, then

(dot product of force and displacement is work)

(dot product of force and velocity is power)

(dot product of gravitational force and vertical displacement is P.E)

is given by Cosθ =

94. The magnitude of component of vector

.
95. The magnitude of component of vector

CROSS PRODUCT :
97. The vector or cross product of two vectors

and the direction of

is perpendicular to both

) etc.
In the case of unit vectors

are not null vectors, then they are parallel to each other.

(commutative law is not obeyed)
b)

(Associate law is not obeyed)
c)

APPLICATIONS OF CROSS PRODUCT :
100. Torque is the cross product of radius vector and force vector,

101. Angular momentum is the cross product of radius vector and linear momentum,

102. Linear velocity in circular motion may be defined as the cross product of angular velocity and radius vector.

103. The area of the triangle formed by

105. The area of the parallelogram formed by

as adjacent sides is

110.  Division by a vector: is not defined because it is not possible to divide a direction by a direction.