1. Deforming force: The external force acting on a body on account of which its size or shape or both change is defined as the deforming force.
2. Restoring force: The force which restores the size and shape of the body when deformation forces are removed is called restoring force. Deforming force and restoring force are not action reaction pair. Restoring force opposes the change in the size and shape of a body.
3. Rigid body: A body whose shape and size cannot be changed however large the applied force is called rigid body. There is no perfectly rigid body in nature.
4. Elasticity: The property of a body by virtue of which it regains its original size and shape immediately after the deformation forces are removed is called elasticity. Elasticity is a molecular phenomenon. It is because of cohesive forces.
5. Elastic body: A body which shows elastic behaviour is called elastic body. E.g. steel, rubber. Quartz is very nearly perfectly elastic body.
6. Plastic body: A body which does not show elastic behaviour is called plastic body. E.g. putty, clay, mud, wax, lead, dough, chewing gum, butter wax etc.
7. Out of the given materials, a body in which it is more difficult to produce strain is more elastic. OR The body which requires greater deforming force to produce a certain change in dimension is more elastic.
a) steel is more elastic than rubber
b) glass is more elastic than rubber
c) water is more elastic than air
d) springs are made of steel but not of copper because steel is more elastic than copper.
8. By the process of hammering or rolling the body elasticity increases.
9. By the process of annealing, the elastic property of a body is reduced.
10. For invar steel (Fe-64%, Ni-36%) the elastic property is constant irrespective of change in temperature. (used in making pendulum clocks)
11. FACTORS EFFECTING ELASTICITY:
a) Effect of temperature: In general as the temperature increases the elastic property of a material decreases.
b) Effect of impurities: Addition of impurity to metal may increase or decrease the elasticity. If the impurity has more elasticity than the material to which it is added, it increases the elasticity.
If the impurity is less elastic than the material it decreases the elasticity.
12. Stress: The restoring force developed per unit area of cross-section of the deformed body is called stress. 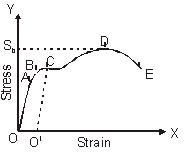 j) The stress required to reach the breaking point is called breaking stress.
k) If the gap between elastic limit and breaking point (BD) of a metal is large, it is called a ductile metal.
l) If the wire breaks soon after exceeding limit, the metal is said to be brittle. (If the gap BD is small).
18. Types of moduli of elasticity: There are three moduli of elasticity.
1) Young modulus ‘Y’
2) Rigidity modulus ‘n’
3) Bulk modulus ‘K’
1) Young’s modulus: Young’s modulus is the ratio of longitudinal stress to longitudinal strain within the elastic limit of a body.

When a mass "M" is attached to the lower end,

i) If  is low for a wire, it can be twisted very easily.
ii) Since phosphor-bronze has very low rigidity modulus, it is used as a suspension fiber in moving coil galvanometers.

whereis rigidity modulus.
3) Bulk modulus: Bulk modulus is the ratio between volume stress and volume strain within the elastic limit of a body.

, the pressure to be applied on it to prevent its expansion = Kγ

where K is its bulk modulus.
ii) When a rubber ball of volume ‘V’ bulk modulus ‘K’ is taken to a depth ‘h’ in water, decrease in its volume is

vi) Breaking force = Breaking stress × area of cross-section
vii) Breaking force:
1) Is independent of length of the wire
2) depends on the area of cross-section and nature of material of the wire.
3) breaking force  area of cross-section.
4) If we cut a cable that can support a maximum load of W into two equal parts, then each part can support a maximum load of W.
23. Elastic Fatigue:
a) The state of temporary loss of elastic nature due to continuous strain is called elastic fatigue.
b) Due to elastic fatigue:
i) a wire can be broken within the elastic limit
ii) a wire can be cut into pieces without using instruments
iii) railway tracks and bridges are declared unsafe after long use
iv) spring balances show wrong readings after long use.
24. Strain energy:

If ‘K’ is the force constant, energy stored for extension ‘e’ is given by

vi) For two wires made of same material, when same force is applied on them

vii) For two wires, made of same material, and of same volume when same force is applied, elongations ratio is given by

viii) If l1 and l2 are the length of a wire under tension T1 and T2, the actual length of the wire =

27. Springs:
i) For a spring that obeys Hooke’s law, equivalent force constant or spring constant is

vi) Two springs have force constants K1 and K2
a) When they are stretched by the same force and if their elastic energies
are E1 and E2.

b) When they are extended by the same length

c) When they are extended till their energies are same,

d) The potential energy of a spring increases, whether it is stretched or compressed.
e) Springs in series Keff =

f) Springs in parallel Keff = K1 + K2
g) The reciprocal of spring constant is called compliance.
vii) When a spiral spring is stretched, strain involved is longitudinal strain. (thickness is small)
viii) When a helical spring is stretched, strain involved is longitudinal and shearing strain. (thickness is large)
ix) When a wire is stretched, modulus of elasticity involved is Young’s modulus
x) When a wire is twisted, modulus of elasticity involved is rigidity modulus.
xi) Inter atomic force constant k = Y. r = Young’s modulus x (inter atomic distance)
28. Thermal force:
i) When a metal bar is fixed between two walls and the temperature is raised, the bar tries to expand and exerts a force on the walls. This force is called thermal force given by F = YAαα

α = co-efficient of linear expansion of the bar

= rise in temperature
Y = Young’s modulus, A=area of cross-section Thermal force is independent of the length of bar.

where A = area of cross-section of the wire and = coefficient of linear expansion of the material of the wire.
29. If a rod of length l and radius r is fixed at one end and the other end is twisted by an angle , then

. where  is angle of shear.