Standard equation of ellipse is

Double ordinate: If P be a point on the Ellipse drawn PN perpendicular to the axis of the ellipse and produced to meet the curve again at P' then PP' is called a doulde ordinate.

Latus Rectum: A double ordinate passing through the focus is called Latus rectum.

End points of latus rectum are

Focal chord: A chord of the ellipse passing through its focus is called a focal chord.

Vertices: The vertices of the ellipse are the points of intersection of ellipse and major axis
A(a, 0), A'(-a, 0). 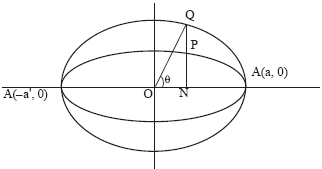 Let P be a point on the ellipse. Ordinate PN produced to meet the auxiliary circle at Q. Line OQ makes an angle θ with +ve direction of axis.
Then coordinates of  Q (a cosθ, a sinθ).

coordinates of P(a cosθ, b sinθ)
x = a cos θ, y = b sinθ are called parametric equations of the ellipse.

Sum of focal distances of any point on the ellipse is equal to major axis 2a. 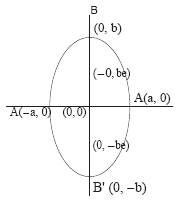 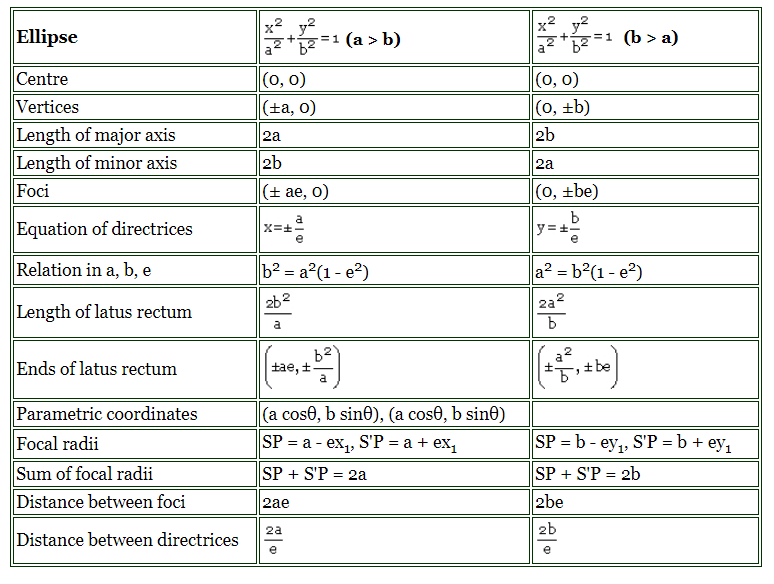 If the above chord passing through focus (ae, 0) then

The point P(x1, y1) lies outside, on, or inside the ellipse

For any value of m,

Equation of normal at P(x1, y1) to the ellipse,

Equation of normal to the ellipse

Equations of the normals of slope 'm' to the ellipse

If the normals at P, Q, R, S to the ellipse intersects at T(h, k) then the points lies on the curve (a2 - b2)xy + b2kx - a2hy = 0
This curve is called apollonian rectangular hyperbola.

The combined equation of the pair of tangents drawn from a point (x1, y1) to the ellipse

The equation of chord of contact of tangents drawn from a point P(x1, y1) to the ellipse

The locus of point of intersection of perpendicular tangents to the ellipse is circle called director circle, Equation is x2 + y2 = a2 + b2.

The Equation of a chord of the ellipse

Locus of point intersection of tangents drawn from the extremity of the chord passing through the fixed point is a straight line is called polar of that point, and point is called pole of that line with respect to ellipse.

Polar of the focus is directrix.

The locus of middle points of a system of parallel chords of an ellipse is called a diameter.

Equation of diameters whose slope of parallel chords is m is

Two diameters are said to be conjugate when each bisect all chords parallel to the other.

The eccentric angles of the ends of a pair of conjugate diameters of an ellipse differ by a right angle.

The sum of the squares of any two conjugate semi diameters an ellipse is constant and  equal to sum of squares of the semi axes of the ellipse.
CP2 + CQ2 = a2 + b2

The product of the focal distances of a point on an ellipse is equal to the square of the semi diameter which is conjugate to the diameter through the point.
SP.S'P = CQ2

... normal is internal bisector of S'PS
... tangent is external biscetor of S'PS
If an incoming light ray passes through one focus (s) strike the concave side of the ellipse then it will get reflected towards other focus (S') 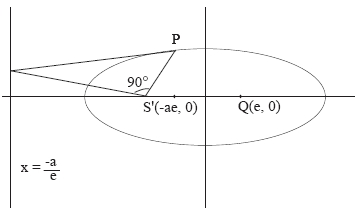 The Position of the tangent between the curve and directrix subtends right angle at the corresponding focus. 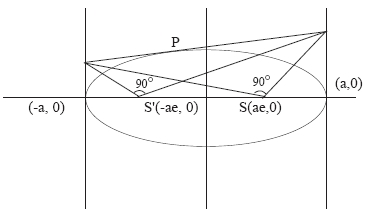 The line segment of the tangent between the tangents at the vertices subtends right angle at the foci.

Foot of the perpendicular from foci to any tangent lies Auxiliary circle, and product of perpendiculars is b2 (square of semi minor axis).

If the normal at any point P on the ellipse