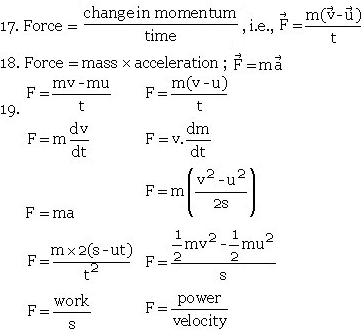 [rocket, conveyor belt problems, etc. can be solved by this formula]
22. If a rocket ejects the exhaust gases with a velocity u relative to the rocket at the rate of

, the force F acting on the rocket is F =

.
23. If gravel is dropped on a conveyor belt at the rate of

, the extra force required to keep the belt moving with velocity is F =

.
25. If a gun fires n bullets each of mass m per second each with a velocity u, the force F necessary to hold the gun is F = mnu.
26. A very large force acting for a short interval of time is called impulsive force.
Eg : Blow of a hammer on the head of a nail.
27. The impulse of a force is defined as the product of the average force and the time interval for which it acts. 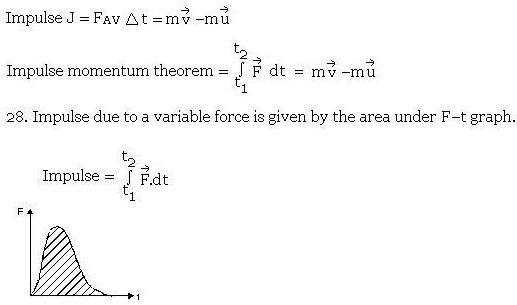 29. While catching a fast moving cricket ball the hands are lowered, there by increasing the time of catch which thus decreases the force on hands.

30. A person jumping on to sand experiences less force than a person jumping on to a hard floor, because sand stops the person in more time.
31. If a force F1 acts on a body at rest for a time t1 and after that another force F2 brings it to rest again in a time t2, then F1t1 = F2t2.
32. The gravitational force that acts on a body is called its weight (W = mg). It is a vector always pointing in a vertically downward direction.
33. A bird is in a wire cage hanging from a spring balance when the bird starts flying in the cage, the reading of the balance decreases.
34. In the above case, if the bird is in a closed cage or air - tight cage and it hovers in the cage, the reading of the spring balance does not change.
35. In the above case for a closed cage if the bird accelerates upward reading of the balance is R = Wbird + ma, where m is the mass of the bird and its acceleration.
36. If a block of mass m hangs at the end of a massless string and the string is pulled up, the tension in string is T = m (g + a) if the block accelerates in the upward direction. T = m (g - a) if the block is accelerated in the downward direction. T = mg if the block is moved up or down with uniform speed.
37. When a man stands on a weighing machine, the weighing machine measures the normal force between the man and the machine.
38. When the man and the weighing machine are at rest relative to the earth, reading of the weighing machine is N = mg = Weight of the man. N is also called apparent weight.
39. Man inside an elevator:
a) Elevator accelerates up:

Relative to earth mg-N=ma
Apparent weight=N=m(g-a)
Tension in the cable
T = (Melevator + Mmam) (g - a)
Same effect is felt when elevator goes up and retards.
If elevator falls freely (cable breads) N = 0
i.e. apparent weight of in a free fall = 0
40. Man inside an artificial satellite
a) An artificial satellite orbiting the earth in a circular orbit is a freely falling body because its centripetal acceleration is equal to the acceleration due to gravity in that orbit.
41. With a car at rest, mark the position of the stationary pendulum bob on the table under it, with the car in motion
a) If the bob remains over the mark only when the car is moving in a straight line at a constant speed. (inertial frame of reference)
b) If the car is gaining or losing the speed or is negotiating a bend, the bob moves from its mark and the car is a non-inertial frame.
42. If you put a ball at rest on a rotating merry-go round, no identifiable force acts on the ball but it does not remain at rest, it is non - inertial reference frame.
43. Newton’s third law : For every action there is an equal and opposite reaction.
44. Newton’s first and third laws are only special cases of second law.
45. Thrust is the total force applied on a given area. It is measured as the product of pressure and the area on which the pressure is applied.
46. In nature forces always occur in pairs (action and reaction)
47. When a body exerts a force on another body, the second body exerts a force on the first body of the same magnitude but in opposite direction.
48. If we tie one end of a string to any point of a body and pull at the other end of the string, we exert a force on the body. Such a force exerted by means of a string is called tension.
49. When two objects are connected by an inextensible massless string passing over a smooth pulley or peg, then (i) both will have the same acceleration and ii) the tension is the same on both the sides of the pulley. 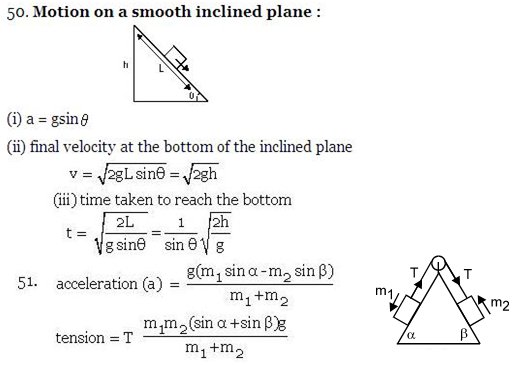 52. Two masses m1 and m2 connected by a string pass over a pulley. m2 is suspended and m1 slides up over a frictionless inclined plane of angle 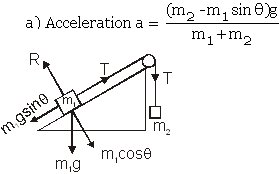 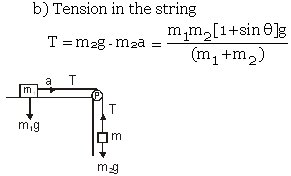 53. A body of mass m1 is placed on a smooth table. A string attached to m1 passes over a light pulley and carries a mass m2.

MOTION OF CONNECTED BODIES :
54. When two bodies are connected by a light string passing over a frictionless pulley

55. A block of mass M is pulled by a rope of mass m by a force P on a smooth horizontal plane

56. Masses m1, m2, m3 are inter connected by light string and are pulled with a string with tension T3 on a smooth table. 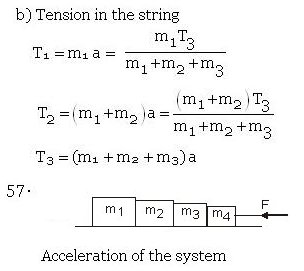