Helium is the first member of group 18 or zero of the periodic table. It consists of six elements helium (He), Neon (Ne), argon (Ar), krypton (Kr), xenon (Xe) and radon (Rn). Zero group occupies the intermediate position between the elements of VIIA (17th) and IA (1st) groups. These are collectively called as inactive gases or inert gases. However, these are now called noble gases as some compounds of these gases have been obtained under certain specific conditions. 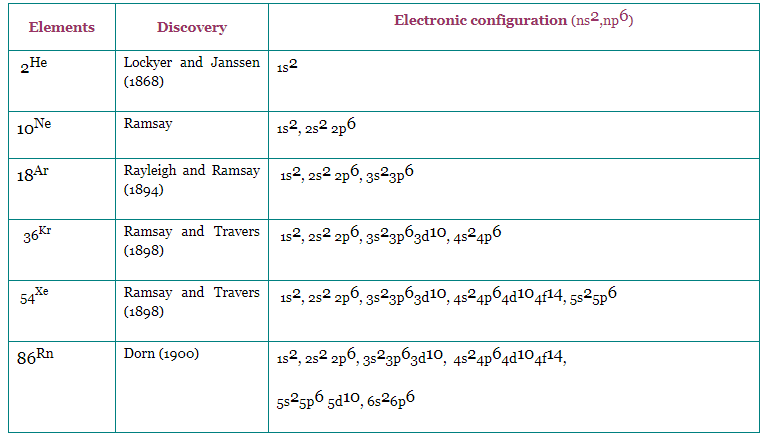 (2) Occurrence: Due to the inert nature of noble gases, they always occur in the free state. Except radon, all these gases are present in atmosphere in the atomic state.

He is also present in natural gas to the extent of 2 to 7%.

(3) Isolation
(i) Helium : It is commercially obtained from natural gas. The natural gas contains hydrocarbons (methane etc.), CO2, H2S and He as the main constituents.
The natural gas is compressed to about 100 atm and cooled to 73K. He remains unliquefied while other gases get liquefied. About 99% pure He is prepared by this method.
(ii) Argon, Neon, Krypton and Xenon : These gases are prepared by the fractionation distillation of liquid air. Fractional distillation of air gives O2, N2 and mixture of noble gases. The individual gases may be obtained by adsorption of air on coconut charcoal. The charcoal adsorbs different gases at different temperatures and can be collected.

Properties :
(1) Atomic radii : The atomic radii of noble gases increases on moving down the group and their atomic radii correspond to the vander Waal’s radii.
(2) Boiling points : The m.pt. and b.pt. increases from He to Rn, because of increase in magnitude of vander Waal’s forces.
(3) Polarizabiltiy : The polarizability increases down the group, He < Ne < Ar < Kr < Xe
(4) Ionisation energy and electron affinity : Noble gases have stable ns2np6 fully filled electronic configuration, so these have no tendency to add or lose electron. Therefore, ionisation energy of noble gases is very high. On the other hand their electron affinity is zero.
(5) Heat of vaporisation : They posses very low values of heat of vapourisation, because of presence of very weak vander Waal’s forces of attraction between their monoatomic molecules. However the value of heat of vaporisation increases with atomic number down the group and this shows that there is an increasing polarizability of the larger electronic clouds of the elements with higher atomic number.

(6) Solubility in water : They are slightly soluble in water. Their solubility generally increases with the increase in atomic number down the group.
(7) Adsorption by charcoal : All of them except helium are adsorbed by cocount charcoal at low temperature. The extent of adsorption increases down the group.
(8) Characteristic spectra : All of them give characteristic spectra, by which they can be identified.
(9) Liquification of gases : It is difficult to liquify noble gases as their atoms are held by weak vander Waal’s forces. Ease of liquification increases down the group from He to Rn. Helium has the lowest boiling point (4.18 K) of any known substance. The ease of liquification increases down the group due to increase in intermolecular forces.
The elements helium (He), neon (Ne), argon (Ar), krypton (Kr), xenon (Xe) and radon (Rn), constitute zero group of the periodic table. These are gases at ordinary temperature and do not have chemical reactivity and therefore, these are called inert gases.

Compounds of Xenon
In 1962, N. Bartlett noticed that PtF6 is a powerful oxidizing agent which combines with molecular oxygen to form ionic compound, dioxygenyl hexafluoro platinate (v) O2+[PtF6]-,
O2(g) + PtF6(g)  → O2+[PtF6]- ,This indicates that PtF6 has oxidized O2 to O2+ . Now, oxygen and xenon have some similarities,
(i) The first ionization energy of Xe gas (1170 kJ mol-1) is fairly close to that of oxygen (1166 kJ mol−1) .
(ii) The molecular diameter of oxygen and atomic radius of Xe are similar (4Å) On this assumption, Bartlett reacted Xenon and PtF6 in gas phase and a orange yellow solid of the composition XePtF6 was obtained,  Xe(g) +  PtF6(g) → Xe + [PtF6]-(s).
Some important stable compounds of Xe are,

(1) Xenon difluoride (XeF2) is formed when a mixture of Xenon and fluorine in the ratio 1 : 3 by volume is passed through a nickel tube at 673 K,

Structure : XeF2 has trigonal bipyramid geometry due to sp3d ‐hybridization of Xe. Three equatorial positions are occupied by lone pairs of electrons giving a linear shape to the molecule.
Properties : XeF2 is a colourless crystalline solid, reacts with H2 to give Xe and HF. It is hydrolysed completely by water,
2XeF2 + 2H2O  → 2Xe + O2 + 4HF .
It also forms addition compounds with reactive pentafluorides like SbF5, TaF5 etc.
XeF2 + 2SbF5  → XeF2 . 2SbF5
It is a mild fluorinating agent and hence reacts with benzene to give fluorobenzene.
(2) Xenon tetrafluoride (XeF4) is prepared by heating a mixture of xenon and fluorine in the ratio 1 : 5 in a nickel vessel at 673 K and then suddenly cooling it in acetone. XeF4 is also formed when an electric discharge is passed through a mixture of xenon and excess of fluorine,

Structure : XeF6 has pentagonal bipyramid geometry due to sp3d3 hybridization. One trans position is occupied by a lone pair giving a distorted octahedral shape.

XeOF2 + 2HF.
Structure : XeOF2 has trigonal bipyramid geometry due to sp3 d‐hybridization of Xe. Two equatorial positions are occupied by lone pairs of electrons giving a T‐shape to the molecule. There is one Xe - O double bond containing pπ − dπ overlapping.
(2) Xenon oxytetrafluoride (XeOF4) is prepared by partial hydrolysis of XeF6; XeF6 + H2O →  XeOF4 + 2HF . It can also be prepared by the reaction of SiO2 with XeF6,
2XeF6 + SiO2 → 2XeOF4 + SiF4.
Structure : XeOF4 has octahedral geometry due to sp3d2 ‐hybridization of Xe. One trans position is occupied by a lone pair giving pyramid shape to the molecule. There is one Xe–O double bond containing pπ − dπ overlapping.
Properties : It is a colourless volatile liquid which melts at 227 K. It reacts with water to give XeO2F2 and XeO3,
XeOF4 + H2O → XeO2 + 2HF ,
XeO2F2 + H2O  → XeO3 + 2HF .
It is reduced by H2 to Xe,
XeOF4 + 3H2  → Xe + H2O + 4HF

2XeO2F2
Structure : XeO2F2 has trigonal bipyramid geometry due to sp3d ‐hybridization of Xe. One equatorial position is occupied by a lone pair of electrons giving a see‐saw structure (shape) to the molecule. There are two Xe - O double bonds containing pπ − dπ overlapping.
Properties : It is a colourless solid which melts at 303K. It is easily hydrolysed to give XeO3
XeO2F2 + H2O  → XeO3 + 2HF

Uses of noble gases
(1) He is used for filling of balloons and air ships because of its non‐inflammability and high power (which is 92.6% to that of hydrogen).

(2) Oxygen‐helium (1 : 4) mixture is used for treatment of asthma and for artificial respiration in deep sea diving because unlike nitrogen, helium is not soluble in blood even under high pressure.
(3) Helium is also used for creating inert atmosphere in chemical reactions.
(4) Liquid helium is used as a cryogenic fluid to produce and maintain extremely low temperatures for carrying out researches and as a coolant in atomic reactors and super conducting magnets.
(5) It is also used in low temperature gas thermometry and as a shield gas for arc welding.
(6) Argon is used for creating inert atmosphere in chemical reactions, welding and metallurgical operations and for filling in incandescent and fluorescent lamps. It is also used in filling Geiger‐Counter tubes and thermionic tubes.
(7) Krypton and Xenon are also used in gas filled lamps. A mixture of Krypton and Xenon is also used in some flash tubes for high speed photography.
(8) Radon is used in radioactive research and therapeutics and in the non-surgical treatment of cancer and other malignant growths.