Angles and their measures:
* An angle is the union of two rays which have a common end point known as the vertex. The rays which form the angle are known as the arms of the angle.
* The measure of an angle is the least amount of rotation from the direction of one ray towards the direction of the other ray.
* An angle measured in anticlockwise sense is considered to be positive and an angle measured in clockwise sense is considered to be negative.

Systems of measurement: An angle can be measured in the following three systems.

* In this system an angle is measured in radians.
* Radian is the angle subtended by an arc of a circle at its centre whose length is equal to its radians.
l = r

Relation between the three systems
If D, G and C are the measures of an angle in sexagesimal system, centesimal system and radian measure.
Do = Gg = Cc

Consider a right angle ∆ABC
right angled at B. Let

Where h = side opposite to

b = sides adjacent to

be rotated by an angle

in anticlockwise sense and be represented as

in its new position. This ray

, can lie in any of the four quadrants depending on the value of

is in fourth quadrant
Let P(x, y) be any point on the terminal ray at a distance 'r' from the origin, then we define the six trigonometric ratios as

n.d. → not defined (± ∞)
Increasing and decreasing nature of trigonometric functions in various quadrants

Domain and Range of trigonometric functions: 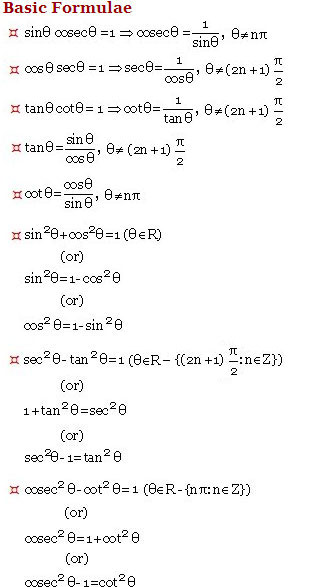