1. Which of the following gases is used for welding
A. Acetylene
Explanation :

The combustion of acetylene is highly exothermic and the heat produced during the combustion can be used for welding purposes in the form of oxy acetylene flame.

2. A metallic carbide on treatment with water gives a colourless gas which burns readily in air and which gives a precipitate with ammoniacal silver nitrate solution. Gas evolved is
A.  Acetylene
Explanation :

4. Identify the product D in the following series of reaction

7. The product formed when acetylene is passed through red hot tube is
A. Benzene
Explanation:

8. Acetylenic hydrogens are acidic because
A. Sigma electron density of C–H bond in acetylene is nearer to carbon, which has 50% s-character

9. Which is the most suitable reagent among the following to distinguish compound (iii) from rest of the compounds?

10. A hydrocarbon of formula C6 H10 absorbs only one molecule of H2 upon catalytic hydrogenation. Upon ozonolysis, the hydrocarbon yields

The hydrocarbon is
A. Cyclohexene
Explanation:

11. Poisonous gas ‘Lewissite’ is obtained by the reaction of
A. CH  ≡ CH and AsCl3
Explanation:

12. Products of the following reaction 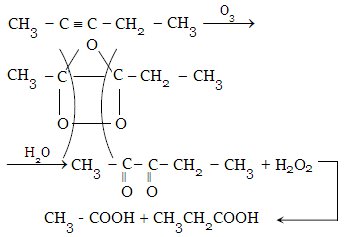 13. By coaltar distillation, which is not obtained
A. Mobil oil

15. The shapes of methane, ethene and ethyne molecules are, respectively
A. Tetrahedral, planar and linear

16. To synthesize the unsymmetrical alkyne CH3 - C ≡ C - CH2 - CH3 the reagents needed would be
A. Ethyne, iodomethane, iodoethane and sodamide
Explanation:

17. When propyne is treated with dilute H2SO4 and HgSO4, the major product is

18. Which of the following will be the final product when C2H2 reacts with HCl

19. What is the end product of the following sequences of operations

The reagent is
A. KOH in C2H5OH
Explanation:

This reaction is an example of dehydrohalogenation Hence, alcoholic KOH is used as a reagent.

22. Acetylene is obtained by the electrolysis of
A. Potassium fumarate
Explanation:

23. The compound C3H4 has a triple bond, which is indicated by its reaction with
A. Ammonical silver nitrate
Explanation:

26. A salt producing hydrocarbon among these compounds is
A. Ethyne
Explanation: Ethyne have acidic hydrogen to form salt.

27. An unknown compound A has a molecular formula C4H6 . When A is treated with an excess of Br2 a new substance B with formula C4H6Br4 is formed. A forms a white precipitate with ammoniacal silver nitrate solution. A may be
A. Butyne-1
Explanation:

Since the molecule takes 2 moles of Br2 . Therefore it is alkyne. Also it gives white ppt with Tollen’s reagent therefore acidic H is present. Hence it is 1-Butyne.

30. The bond length between sp3 hybridised carbon atom and other carbon atom is minimum in
A. Propyne

35. A compound is treated with NaNH2 to give sodium salt. Identify the compound

36. A gas decolourises bromine in CCl4 and forms a precipitate with ammoniacal silver nitrate. The gas is
A. C2H2
Explanation :

38. The homologue of ethyne is
A. C3H4
Explanation : C2H2 and C3H4 are homologue because they differ by -CH2 group. Both have triple bond in their molecule.

39. When acetylene reacts with HCl in the presence of HgCl2 , the product is
A. Vinyl chloride
Explanation :

40. When propyne reacts with aqueous H2SO4 in the presence of HgSO4, the major product is
A. Acetone
Explanation : 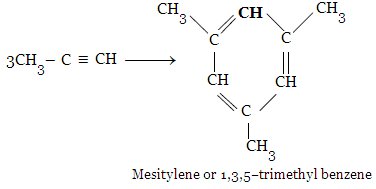 42. When treated with ammoniacal cuprous chloride, which one among the following forms copper derivative?
A. C2H2
Explanation :

43. Which of the following catalyst is used in the polymerisation of CH

44. KMnO4 will oxidise acetylene to
A. Oxalic acid
Explanation :

45. Ethyne on reaction with dil. H2SO4 and Hg(II) gives
A. Ethanal
Explanation :

48. If acetylene is passed through an electric arc in the atmosphere of nitrogen, the compound formed is
A. HCN

50. The bond length between the hybridised carbon atom and other carbon atom is minimum in
A. Propyne
Explanation : Bond length decreases with increase in number of bonds.

51. The reaction of propene with HOCl proceeds via the addition of
A. Cl+ and OH- in a single step

53. Ethylidine dichloride can be prepared by the reaction of HCl and
A. C2H2

55. Benzene is the polymer of
A. Ethyne
Explanation :

reacts with acetic acid in presence of Hg2+ to give

Explanation : Reaction of acetic acid with acetylene is catalysed by Hg2+ salts.

57. Acetylene is prepared industrially by passing electric discharge through graphite electrodes in the atmosphere of
A. H2
Explanation :

58. When acetylene is passed into dilute sulphuric acid containing Hg2+ ions, the product formed is
A. Acetaldehyde

61. The structure of the product(Z) in the reactions given below

62. Carbon-carbon bond length is minimum in
A. Ethyne

63. Triple bond of ethyne is made of or Cylindrical shape of an alkyne is due to
A. Two π and one σ - bond
Explanation : In CH

CH triple bond consists of one σ and two π bonds.

64. An organic compound has a triple bond and not double bond. It can be tested by
A. Ammonical silver nitrate

66. What is the product when acetylene reacts with hypochlorous acid?
A. Cl2CHCHO
Explanation :

69. Which will undergo reaction with ammoniacal AgNO3
A.

70. Acetylene gas when passed through the 20% H2SO4 at 80oC gives acetaldehyde. The catalyst required for this conversion is
A. HgSO4
Explanation :

71. Which of the following reactions will yield 2, 2-dibromopropane
A. CH3C

72. Which of the following does not give white precipitate with ammoniacal AgNO3
A. CH3 - C

C - CH3, 2-butyne does not have acidic hydrogen. Hence, does not give white ppt. with ammonical AgNO3 solution.

74. Which is represented by the formula CnH2n -2
A. Alkyne

75. What is the major product of the following reaction

77. 1, 2-dibromoethane when heated with alcoholic potash gives
A. Acetylene
Explanation :

78. Which of the following is not a member of homologous series
A. 2-butyne
Explanation : All are alkenes but 2-butyne is not.

79. The compound formed as a result of potassium permanganate oxidation of ethylbenzene is
A. Benzoic acid

80. What is the product when 2-butyne is treated with liquid NH3 in presence of lithium
A. trans-2-butene
Explanation : Reduction of alkynes with liquid NH3 / Li gives trans alkenes.

82. A mixture of ethane, ethene and ethyne is passed through ammoniacal AgNO3 solution. The gases which remain unreacted are
A. Ethane and ethene
Explanation : Ethyne reacts with ammonical AgNO3 to give white ppt of silver acetylide while ethane and ethene do not react because acidic hydrogen is absent.

83. In its reaction with silver nitrate acetylene shows

84. Simplest alkyne is represented by
A. C2H2

86. The hybridisation in methane, ethene and Ethyne respectively is
A. sp3, sp2 and sp

87. Number of acidic hydrogen atoms in butyne-1 are
A. 1
Explanation : The hydrogen atom which is attached to triple bond is acidic.

89. Calcium carbide on reacting with water gives
A. Acetylene

90. Addition of HCN to ethyne in presence of Ba(CN)2 as catalyst gives
A. Vinyl cyanide
Explanation :

91. Which compound will react with an aqueous solution of Ag(NH3)2+OH-
A. CH3CH2C

CH has one acidic hydrogen.

94. The number of π - bonds in the product formed by passing acetylene through dilute sulphuric acid containing mercuric sulphate is
A. One
Explanation :

C - CH3 has not acidic character.

96. Which of the following reactions is shown by alkynes
(a) Addition (b) Substitution (c) Polymerization (d) All of these
A. All of these
Explanation : 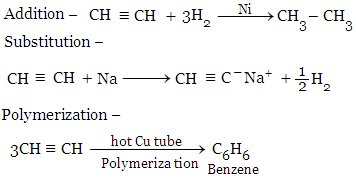 97. Shortest C–C bond length is present in
A. CH

98. Acetylene can be obtained by the reaction
A.

Explanation : Acetylene can be obtained by the reaction of silver and chloroform (or iodo form)

99. Which of the following used for the conversion of 2-hexyne into trans-2-hexane
A. Li - NH3 /C2H5OH
Explanation : The partial reduction of alkynes by active metal in liquid ammonia takes place through trans vinylic anion which ultimately produces trans alkene.

C bond length = 1.20A. Since propyne has triple bond; therefore it has minimum bond length.

101. What happens when a mixture of acetylene an hydrogen is passed over heated Lindlar’s catalyst
A. Ethylene is formed
Explanation :

102. In acetylene molecule, the two carbon atoms are linked by
A. One sigma bond and two pi bonds
Explanation :

103. Which reacts with ammoniacal AgNO3

A. Propyne
Explanation : Propyne reacts with ammoniacal AgNO3 due to presence of acidic hydrogen atom.
CH3C