1. The function of anhydrous AlCl3 in the Friedel-Craft's reaction is to
A: To produce electrophile

2. Benzene reacts with CH3COCl in the presence of to give
A: C6H5COCH3
Solution:

3. Acylation process is preferred than direct alkylation because (by the Friedel-Craft's reaction)
A: In alkylation, polyalkylated product is formed

bonds in a molecule of benzene is
A:

9. Carbon atoms in benzene molecule is inclined at an angle of
A: 120º

10. When benzene is treated with excess of Cl2 in the presence of I2, the end product is
A: Hexachlorobenzene

11. Chemical name of the insecticide gammexene is
A: Benzene hexachloride
Solution:

12. Gammexane is obtained from benzene when it reacts with
A: Cl2 in bright sunlight (in the absence of a catalyst)

14. Which equation represents an example of Friedel-Craft's reaction

15. The most stable carbonium ion among the following is

16. The reaction of toluene with chlorine in presence of ferric chloride gives predominantly
A: o- and p-chlorotoluenes
Solution:

17. The product formed when toluene is heated in light with Cl2 and in absence of halogen carrier is
A: Benzotrichloride
Solution:

19. Which of the following reactions takes place when a mixture of concentrated HNO3 and H2SO4 reacts on benzene at 350 K
A: Nitration
Solution:

20. Nitration of benzene by nitric acid and sulphuric acid is
A: Electrophilic substitution

23. The reaction of benzene with chlorine in the presence of iron gives
A: Chlorobenzene
Solution:

24. Benzene was discovered by
A: Faraday

25. The correct structure of benzene was proposed by
A: Kekul

26. The centric structure of benzene was proposed by
A: Armstrong and Baeyer

27. The bond order of individual carbon-carbon bonds in benzene is
A: Between one and two

28. Six carbon atoms of benzene are of
A: One type

30. Benzene on treatment with a mixture of conc. HNO3 and conc. H2SO4 at 100oC gives
A: m-dinitrobenzene
Solution:

31. What is the end product which is obtained on the nitration of toluene
A: 2, 4, 6-trinitrotoluene
Solution: 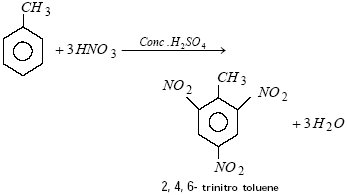 33. The attacking (electrophilic) species in sulphonation of benzene is
A: SO3

34. Which xylene is most easily sulphonated
A: Meta
Solution:

m-xylene is most easily sulphonated because O and P both positions are free with respect to methyl group.

37. Most common reactions of benzene (aromatic hydrocarbon) and its derivatives are
A: Electrophilic substitution reactions

41. The compound that is most reactive towards electrophilic nitration is
A: Toluene
Solution:

43. Which of the following would be least reactive towards bromine
(a) Nitrobenzene     (b) Phenol     (c) Anisole     (d) Chlorobenzene
A: (a) Nitrobenzene
Solution: Nitrobenzene is least reactive towards bromine because of presence of -NO2 group decreases electron density at o and p positions and hence attack of electrophile on the benzene nucleus is difficult because + ve charge on o and p position repel the incoming electrophile.

46. Anhydrous AlCl3 is used in the Friedel-Craft's reaction because it is
A: Electron deficient
Solution:

47. (i) Chlorobenzene and (ii) benzene hexachloride are obtained from benzene by the reaction of chlorine, in the presence of
A: (i) Anhydrous and AlCl3 (ii) direct sunlight 48. In Friedel Craft's alkylation, besides AlCl3 the other reactants are
A:

49. Nitration of benzene is a
A: Electrophilic displacement

52. Thiophene and benzene are separated by
A: Sulphonation of benzene

57. Methyl group attached to benzene can be oxidised to carboxyl group by reacting with
A: KMnO4
Solution:

60. Which is formed when benzene is heated with chlorine in the presence of sunlight
A: C6H6Cl6

62. Adding of Cl2 to benzene in the presence of AlCl3 is an example of
A: Substitution
Solution:

63. What happens when naphthalene balls are put inside kerosene
A: Dissolves easily

64. Three fused benzene rings are found in
A: Anthracene

65. Product obtained after nitration of nitrobenzene is
A: 1, 3-dinitrobenzene
Solution:

66. After ozonolysis of benzene (not hydrolysis), the product is
A: Benzene triozonide

67. Which acid will not form hydrocarbon
A: Picric acid

68. Catalytic dehydrogenation of n-haptane in presence of Cr2O3/Al2O3 at 750 K gives
A: toluene
Solution:

74. In chlorination of benzene, the reactive species is
A: Cl+
Solution: Halogenation is initiated by free redical.

80. Nitration of toluene takes place at
A: Both o- and p-positions
Solution: 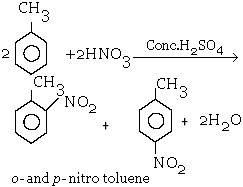 Presence of - CHO decrease electron density at o to p positions. Hence, attack of an electrophile occurs at m-position. therefore it is meta directing group.

83. The compound ‘A’ having formula C8H10 (aromatic) which gives 1 mononitro substitute and 3 nitrosubstitute compound is
A: p-Xylene

85. Benzene is obtained from
A: Coaltar

86. The ‘middle oil’ fraction of coaltar distillation contains
A: Naphthalene

87. Lindane can be obtained by reaction of benzene with
A: Cl2/Sunlight
Solution:

C triple bond is quite strong bond and therefore ethyne generally require catalysts (like Hg2+ etc) in its reactions. 95. Amongst the following the most basic compound is
(a) Benzylamine     (b) Aniline     (c) Acetanilide    (d) p-nitroaniline
A: a (Benzylamine)
Solution: -NH2 group is not linked with benzene ring.

96. When toluene is treated with KMnO4, what is produced
A:  Benzoic Acid
Solution:

97. In presence of light and heat toluene chlorinated & react with aqueous NaOH to give
A: Benzoic Acid
Solution: 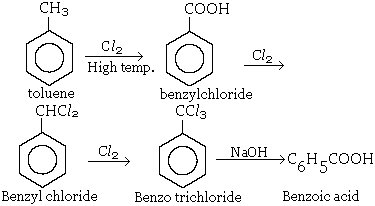