Single Option Questions
1. An Indian rubber cord L metre long and area of cross-section A metre2 is suspended vertically. Density of rubber is D kg / metre3 and Young's modulus of rubber is E newton / metre2 . If the wire extends by l metre under its own weight, then extension l is
Ans: L2Dg / 2E
2. To break a wire, a force of 106 N / m2 is required. If the density of the material is 3 × 103 kg / m3, then the length of the wire which will break by its own weight will be
Ans: 34 m
Sol:

3. Two rods of different materials having coefficients of linear expansion α1, α2 and Young's moduli Y1 and Y2 respectively are fixed between two rigid massive walls. The rods are heated such that they undergo the same increase in temperature. There is no bending of rods. If
α1 : α2 = 2 : 3, the thermal stresses developed in the two rods are equally provided Y1 : Y2 is equal to
Ans: 3 : 2
Sol: Thermal stress = YαΔ

α.
If thermal stress and rise in temperature are equal then

5. One end of a uniform wire of length L and of weight W is attached rigidly to a point in the roof and a weight W1 is suspended from its lower end. If S is the area of cross-section of the wire, the stress in the wire at a height 3L/4 from its lower end is
Ans:

6. There are two wires of same material and same length while the diameter of second wire is 2 times the diameter of first wire, then ratio of extension produced in the wires by applying same load will be
Ans: 4 : 1

7. A particle of mass m is under the influence of a force F which varies with the displacement x according to the relation F = −kx + F0 in which k and F0 are constants. The particle when disturbed will oscillate
Ans:

8. An elastic material of Young's modulus Y is subjected to a stress S. The elastic energy stored per unit volume of the material is
Ans:

9. Two wires A and B of same length, same area of cross-section having the, same Young's modulus are heated to the same range of temperature. If the coefficient of linear expansion of A is 3/2 times of that of wire B. The ratio of the forces produced in two wires will be
Ans: 3/2

11. To break a wire of one meter length, minimum 40 kg wt. is required. Then the wire of the same material of double radius and 6 m length will require breaking weight
Ans: 160 kg-wt
Sol: Breaking force = Breaking stress × Area of cross section of wire
Breaking force ∝ r2 (Breaking distance is constant) If radius becomes doubled then breaking force will become 4 times i.e. 40 × 4 = 160 kg wt
12. The breaking stress of a wire of length L and radius r is 5 kg - wt / m2. The wire of length 2l and radius 2r of the same material will have breaking stress in kg - wt/m2
Ans: 5
Sol: Breaking stress depends on the material of wire.
13. The increase in length on stretching a wire is 0.05%. If its Poisson's ratio is 0.4, then its diameter
Ans: Reduce by 0.02%

for a material, then the material is
Ans: Uncompressible

17. On all the six surfaces of a unit cube, equal tensile force of F is applied. The increase in length of each side will be (Y = Young's modulus, σ = Poission's ratio)
Ans:

21. A rectangular block of size 10cm × 8cm × 5cm is kept in three different positions P, Q and R in turn as shown in the figure. In each case, the shaded area is rigidly fixed and a definite force F is applied tangentially to the opposite face to deform the block. The displacement of the upper face will be 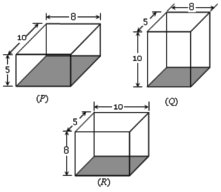 For maximum displacement area at which force applied should be minimum and vertical side should be maximum, this is given in the R position of rectangular block.

Graphical Questions
22. The graph shown was obtained from experimental measurements of the period of oscillations T for different masses M placed in the scale pan on the lower end of the spring balance. The most likely reason for the line not passing through the origin is that the

Ans: Mass of the pan was neglected

If we draw a graph between T2 and M then it will be straight line.
and for M = 0, T2 = 0
i.e. the graph should pass through the origin.
but from the it is not reflected it means the mass of pan was neglected.

23. A graph is shown between stress and strain for a metal. The part in which Hooke's law holds good is

24. In the graph, point B indicates
Ans: Yield point

Ans: None of the above is true

27. The diagram shows a force-extension graph for a rubber band. Consider the following statements

I. It will be easier to compress this rubber than expand it
II. Rubber does not return to its original length after it is stretched
III. The rubber band will get heated if it is stretched and released
Which of these can be deduced from the graph
Ans: III only
Sol: Area of hysterisis loop gives the energy loss in the process of stretching and unstretching of rubber band and this loss will appear in the form of heating.

28. The stress versus strain graphs for wires of two materials A and B are as shown in the figure. If  YA and YB are the Young ‘s modulii of the materials, then

29. The load versus elongation graph for four wires of the same material is shown in the figure. The thickest wire is represented by the line

30. The adjacent graph shows the extension (l) of a wire of length 1m suspended from the top of a roof at one end with a load W connected to the other end. If the cross sectional area of the wire is 10-6 m2, calculate the young’s modulus of the material of the wire

31. The graph is drawn between the applied force F and the strain (x) for a thin uniform wire. The wire behaves as a liquid in the part

Ans: bc
Sol: At point b, yielding of material starts.

32. The graph shows the behaviour of a length of wire in the region for which the substance obeys Hook’s law. P and Q represent

34. The value of force constant between the applied elastic force F and displacement will be

35. The diagram shows stress v/s strain curve for the materials A and B. From the curves we infer that

Ans: A is ductile and B is brittle
Sol: In ductile materials, yield point exist while in Brittle material, failure would occur without yielding.

36. Which one of the following is the Young’s modulus (in N/m2) for the wire having the stress-strain curve shown in the figure

37. The diagram shows the change x in the length of a thin uniform wire caused by the application of stress F at two different temperatures T1 and T2. The variations shown suggest that

Sol: Elasticity of wire decreases at high temperature i.e. at higher temperature slope of graph will be less.
So we can say that T1 > T2

38. A student plots a graph from his reading on the determination of Young’s modulus of a metal wire but forgets to label.  The quantities on X and Y axes may be respectively.

39. The points of maximum and minimum attraction in the curve between potential energy (U) and distance (r)of a diatomic molecules are respectively

40. The stress-strain curves for brass, steel and rubber are shown in the figure. The lines A, B and C are for

41. Assertion: The stretching of a coil is determined by its shear modulus.
Reason: Shear modulus change only shape of a body keeping its dimensions unchanged.
Ans: Both assertion and reason are true and the reason is the correct explanation of the assertion.
Sol: Because, the stretching of coil simply changes its shape without any change in the length of the wire used in coil. Due to which shear modulus of elasticity is involved.

42. Assertion: Spring balances show correct readings even after they had been used for a long time interval.
Reason: On using for long time, spring balances losses its elastic strength.
Ans: Assertion is false but reason is true.
Sol: When a spring balance has been used for a long time, the spring in the balance fatigued and there is loss of strength of the spring. In such a case, the extension in the spring is more for a given load and hence the balance gives wrong readings.

44. Assertion: Glassy solids have sharp melting point.
Reason: The bonds between the atoms of glassy solids get broken at the same temperature.
Ans: The assertion and reason both are false.

Sol: In a glassy solid (i.e., amorphous solid) the various bonds between the atoms or ions or molecules of a solid are not equally strong. Different bonds are broken at different temperatures. Hence there is no sharp melting point for a glassy solid.

45. Assertion: A hollow shaft is found to be stronger than a solid shaft made of same material.
Reason: The torque required to produce a given twist in hollow cylinder is greater than that required to twist a solid cylinder of same size and material.
Ans: Both assertion and reason are true and the reason is the correct explanation of the assertion.

where P is increase in pressure, V is change in volume.

Sol: Strain is the ratio of change in dimensions of the body to the original dimensions. Because this is a ratio, therefore it is dimensionless quantity.

48. Assertion: The bridges declared unsafe after a long use.
Reason: Elastic strength of bridges losses with time.
Ans: Both assertion and reason are true and the reason is the correct explanation of the assertion.
Sol: A bridge during its use undergoes alternating strains for a large number of times each day, depending upon the movement of vehicles on it when a bridge is used for long time, it losses its elastic strength. Due to which the amount of strain in the bridge for a given stress will become large and ultimately, the bridge may collapse. This may not happen, if the bridges are declared unsafe after long use.

49. Assertion: Two identical solid balls, one of ivory and the other of wet-clay are dropped from the same height on the floor. Both the balls will rise to same height after bouncing.
Reason: Ivory and wet-clay have same elasticity.
Ans: The assertion and reason both are false.
Sol: Ivory is more elastic than wet-clay. Hence the ball of ivory will rise to a greater height. In fact the ball of wet-clay will not rise at all, it will be somewhat flattened permanently.

51. Assertion: Identical springs of steel and copper are equally stretched. More work will be done on the steel spring.
Reason: Steel is more elastic than copper.
Ans: Both assertion and reason are true and the reason is the correct explanation of the assertion.

Since, elasticity of steel is more than copper, hence more work has to be done in order to stretch the steel.