1. The following reaction is known as

2. What is the main product of the reaction between 2-methyl propene with HBr
A: 2-bromo-2 methyl propane
Sol:

3. Halogenation of alkanes is
A: An oxidative process

In the above process product A is
A: Fluorobenzene

7. When ethyl alcohol (C2H5OH) reacts with thionyl chloride, in the presence of pyridine, the product obtained is
A: CH3CH2Cl + HCl + SO2
Sol:

8. Preparation of alkyl halides in laboratory is least preferred by
A: Direct halogenation of alkanes

9. Which of the following organic compounds will give a mixture of 1-chlorobutane and 2-chlorobutane on chlorination
A:

10. The chlorobenzene is generally obtained from a corresponding diazonium salt by reacting it with
A: Cu2Cl2

13. Chlorobenzene is prepared commercially by
A: Raschig process

14. In methyl alcohol solution, bromine reacts with ethylene to yield BrCH2CH2OCH3 in addition to 1, 2- dibromoethane because
A: The ion formed initially may react with Br− or CH3OH
Sol:

is an example of which of the following types of reactions
A: Substitution
Sol:

19. Benzene reacts with chlorine to form benzene hexachloride in presence of
A: Bright sunlight

20. The final product obtained by distilling ethyl alcohol with the excess of chlorine and Ca(OH)2 is
A: CHCl3 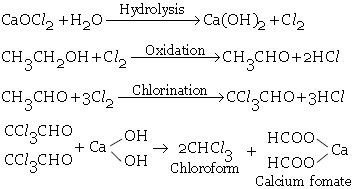 25. Chloroform can be obtained from
A: Propanol-2
Sol: 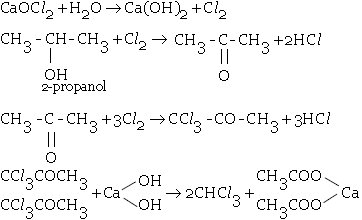 26. Chlorine reacts with ethanol to give
A: Chloral
Sol:

27. On heating diethyl ether with conc. HI, 2 moles of which of the following is formed
A: Ethyl iodide
Sol:

29. Which compound does not form iodoform with alkali and iodine
A: Diethyl ketone

30. Which compound gives yellow ppt. with iodine and alkali
A: Acetophenone
Sol:

31. Acetone reacts with I2 in presence of NaOH to form
A: CHI3
Sol:

32. Ethanol is converted into ethyl chloride by reacting with
A: SOCl2
Sol:

34. The starting substance for the preparation of CH3I is
A: CH3OH
Sol:

35. A Grignard's reagent may be made by reacting magnesium with
A: Ethyl iodide
Sol:

37. When a solution of sodium chloride containing ethyl alcohol is electrolysed, it forms
A: Chloroform

38. Which reagent cannot be used to prepare an alkyl halide from an alcohol
A: NaCl

40. On treatment with chlorine in presence of sunlight, toluene gives the product
A: Benzyl chloride

41. When chlorine is passed through warm benzene in presence of the sunlight, the product obtained is
A: Gammexane

43. Propene on treatment with HBr gives
A: IsoPropyl bromide

44. The catalyst used in Raschig's process is
A: Copper chloride

45. The compound formed on heating chlorobenzene with chloral in the presence of concentrated sulphuric acid, is
A: DDT
Sol:

46. Acetone is mixed with bleaching powder to give
A: Chloroform
Sol:

48. The product formed on reaction of ethyl alcohol with bleaching powder is
A: CHCl3
Sol:

49. Ethylene reacts with bromine to form
A: Ethylene dibromide
Sol:

50. Best method of preparing alkyl chloride is
A: ROH + SOCl2

Sol: The chlorination of alcohol by SOCl2 (thionyl chloride) is the best method for the preparation of alkyl halides as in this method all the other product are gaseous and thus halides are obtained on quite pure

51. DDT is prepared by reacting chlorobenzene with
A: CCl3 − CHO
Sol:

52. Which compound needs chloral in its synthesis
A: D. D. T.

Sol:   DDT is formed by reaction of chloral with chloro benzene.

53. To get DDT, chlorobenzene has to react with which of the following compounds in the presence of concentrated sulphuric acid
A: Trichloroacetaldehyde

54. What will be the product in the following reaction

Sol:  NBS is a selective brominating reagent since it normally brominates the ethylenic compounds in the allylic position.