Properties and Solutions of Triangles

where R is the radius of circumcircle of ∆ ABC

Formulae corrected with area of a triangle 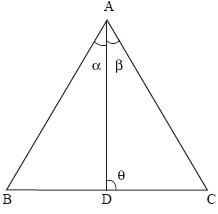 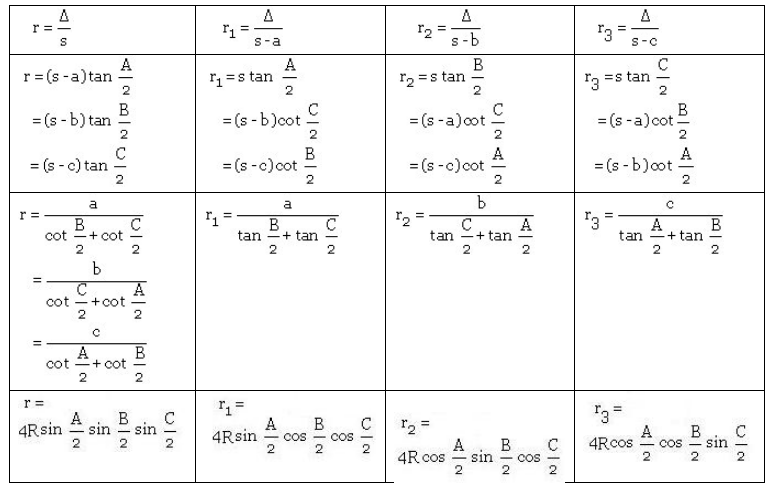 4. The circumcircle of pedal ∆DEF is same as nine point circle of ∆ABC

Medians of a triangle and Centroid
Let AD, BE, CF be the medians of
∆ABC concurrent at G (Centroid of ∆ABC)
Appolonius Theorem 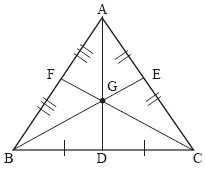 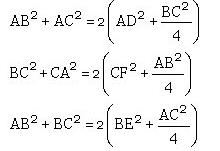 The length of medians are given by (using Appolonius Theorem) 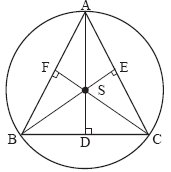 Distance of Incentre from vertices & sides 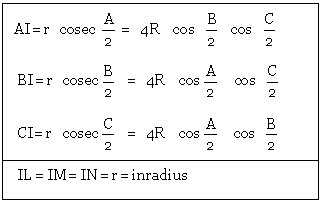 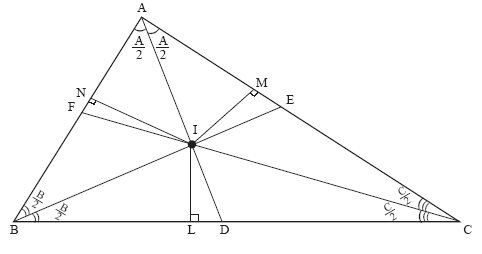 Distance of Excentre from Vertices and Sides

Euler's line: If H, N, G, S represent orthocentre, nine point centre, centroid and circumcentre of ∆ABC then HN : NG : GS = 3 : 1 : 2. The line on which these points lie is known as Euler's line.
Distance between various centres associated with a triangle 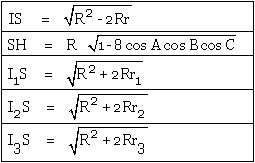 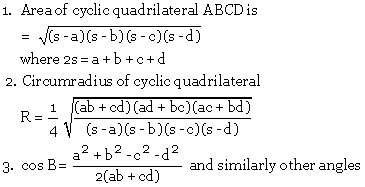 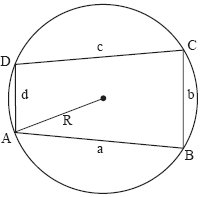 REGULAR POLYGON:
A polygon is called a regular polygon if all its sides are equal and its angles are equal.

where 'a' is a length of side, 'n' is number of sides of polygon, 'R' is radius of circumscribing circle and 'r' is the radius of incircle of the polygon.

SOLUTION OF TRIANGLES:
In a triangle there are six elements, viz., three sides and three angles. In plane geometry we have done that if three of the elements are given at least one of which must be a side, then the other three elements can be uniquely determined. The procedure of determining unknown elements from the known elements is called solving a triangle.

Solution of a right angled triangle
Case - I: When two sides are given
Let the triangle be right angled at C,
then we can determine the remaining
elements as given in the following table.

Case - II: When a side and an acute angle are given
In this case we can determine the remaining elements as given in the following table.

SOLUTION OF TRIANGLES IN GENERAL
Case - I: When three sides a, b and c are given
In this case the remaining elements are determined by using the following formulae.

Case - II: When two sides a, b and the included angle C are given

Case - III: When one side a and two angles A and B are given
In this case we use the following formulae to determine the remaining elements.
A + B + C = 180o

Case - IV: When two sides a, b and the angle A opposite to one side is given

From (1), the following possibilities will arise:
(a) When A is an acute angle and a < b sin A
In this case the relation sin B =

gives that sin B > 1, which is impossible.
Hence no triangle is possible.

Hence two triangles are possible. It is called ambiguous case.