9. There are four scales of temperature. They are Celsius scale, Fahrenheit scale, Reaumer scale and Kelvin (or Absolute or thermodynamic temperature) scale.
10. The most fundamental scale of temperature called Kelvin scale is based on the laws of thermodynamics.
11. The melting point of ice at standard atmospheric pressure is taken as the lower fixed point.
12. The boiling point of water at standard pressure is taken as the upper fixed point. The upper fixed point is determined by using Hypsometer. 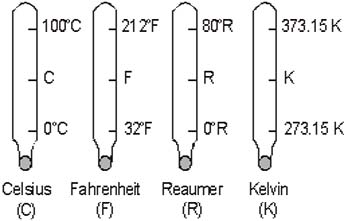 13. The distance between the lower and upper fixed points is divided into definite equal divisions.
14. Different scales of temperature.
15. The reading on one scale can be readily converted into corresponding one or the other by the relation

16. If in a certain arbitrary scale of temperature, p° is the lower fixed point and q° is the upper fixed point, any temperature x in this scale can be converted to Celsius or Fahrenheit scale by using the formula

17. The differences of temperature on different scales can be converted using the formula

19. Advantages of mercury as a thermometric fluid.
i) Mercury remains as a liquid over a wide range of temperature
ii) Pure mercury can be readily and easily obtained.
iii) Its vapour pressure at ordinary temperature is negligible.
iv) It has high conductivity and low thermal capacity. So it quickly attains the temperature of the body by taking a negligibly small quantity of heat.
v) It does not wet glass and is opaque.

20. Of all the thermometers, gas thermometers are more sensitive because of their high volume expansion. They have the same scale for all gases. Thermometry, Thermal Expansion and Calorimetry.

21. Using a constant volume hydrogen thermometer, temperatures ranging from -200oC to 1100oC can be measured. It is generally used to calibrate other thermometers.
22. To have more surface contact with heat, the thermometric bulb will be in the shape of a cylinder.
23. To determine the maximum and minimum temperatures attained during a day at a place, Six’s maximum and minimum thermometer is used.
24. If X is any thermometric property such as pressure or volume or resistance which has values at 0o, 100o and to on any scale as X0, X100 and Xt, then

Expansion of solids
26. Solids expand on heating due to increased atomic spacing.
27. A solid can be considered as periodic arrangement of atoms in the form of lattice.
28. At any particular temperature, the atoms are in a specific state of vibration about a fixed point called as equilibrium position in the lattice.
29. As the temperature increases, the amplitude of vibration of the atoms increases.
30. If the lattice vibrations are purely harmonic the potential energy curve is a symmetric parabola and there is not thermal expansion. 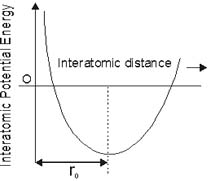 31. If the lattice vibrations are an harmonic, the potential energy of an oscillator is an asymmetric function of its position and thermal expansion is observed. 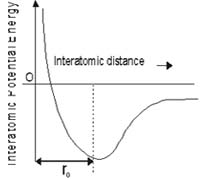 Unit of β is

or K-1
35. The change in area is calculated using formula Δa = aβΔt.
36. The coefficient of volume or cubical expansion (γ) is the increase in volume per unit volume per degree rise in temperature.

Unit of γ is

or K-1
37. The change in volume is calculated using formula ΔV = VγΔt.
38. For all isotropic substances (solids which expand in the same ratio in all directions) α : β : γ = 1 : 2 : 3  or γ = 3α ; β = 2α ; γ = α + β.
39. If αx, αy and αz represent the coefficients of linear expansion for an isotropic solids (solids which expand differently in different directions) in x, y and z directions respectively, then  γ = αx + αy + αz and the average coefficient of linear expansion

per oC.
46. Variation of density with temperature : The density of a solid decreases with increase of temperature.

where do is density at 0oC.

For same thermal stress in two different rods heated through the same rise in  temperature,  Y1 - α1 = Y1 - α1.
50.  Barometer with brass scale :
Relation between faulty and actual barometric height is given by h2 = h1[1 + (αs- YHg (t2 - t1)]
h1 = height of barometer at t1°C where the scale is marked
h2 = height of barometer at t2°C where the measurement is made
γHg = real coefficient of expansion of mercury
αs = coefficient of linear expansion of scale
51.  Pendulum clocks lose or gain time as the length increases or decreases respectively.
The fractional change

The loss or gain per day

× 86400 seconds.
52.  The condition required for two rods of different materials to have the difference between the lengths always constant is L1α1 =  L2α2.
53.  A hole in a metal plate expands on heating just like a solid plate of the same size.

62.  Iron or steel is used for reinforcement in concrete because both have nearly equal coefficients of expansion.
63.  Pyrex glass has low α. Hence combustion tubes and test tubes for hating purpose are made out of it.
64.  Invar steel (steel + nickel) has very low α. So it is used in making pendulum clocks, balancing wheels and measuring tapes. (Composition of invar steel is 64% steel and 36% nickel).
65.  Metal pipes that carry steam are provided with bends to allow for expansion.
66.  Telephone wires held tightly between the poles snap in winter due to induced tensile stress as a result of prevented contraction.
67.  Thick glass tumbler cracks when hot liquid is poured into it because of unequal expansion.
68.  Hot chimney cracks when a drop of water falls on it because of unequal contraction.
69.  A brass disc snuggly fits in a hole in a steel plate. To loosen the disc from the hole, the system should be cooled.
70.  To remove a tight metal cap of a glass bottle, it should be warmed.
71.  While laying railway tracks, small gaps are left between adjacent rails to allow for free expansion without affecting the track during summer.

Gap to be left (Δl) = αlΔt = expansion of each rail.
72.  Concrete roads are laid in sections and expansion channels are provided between them.
73.  Thermostat is a device which maintains a steady temperature.
74.  Thermostats are used in refrigerators, automatic irons and incubators.
75.  Thermostat is a bimetallic strip made of iron and brass. The principle involved is different materials will have different coefficients of linear expansion.
76.  A bimetallic strip is used in dial-type thermometer.
77.  If an iron ring with a saw-cut is heated, the width of the gap increases.
78.  Barometric scale which expands or contracts measures wrong pressure. On expansion the true pressure is less than measured pressure.
Ptrue = Pmeasured[1 -( γ - α )t]
where γ = coefficient of cubical expansion of mercury
α  = coefficient of linear expansion of the material used in making the scale
t = rise of the temperature
79.  When a straight bimetallic strip is heated it bends in such a way that the more expansive metal lies on the outer side.

If d is the thickness of the each strip in a bimetallic strip, then the radius of the compound strip is given by R =

EXPANSION OF LIQUIDS
1.  Liquids expand on heating except water between 0°C and 4°C.
2.  The expansion of liquids is greater than that of solids (about 10 times).
3.  Liquids do not possess any definite shape and require a container to hold them. Hence only cubical expansion is considered.
4.  Since heat effects both the liquid and the container the real expansion of a liquid cannot be detected directly.
5.  For liquids there are two types of cubical expansion
i) coefficient of apparent expansion (γa)
ii) coefficient of real or absolute expansion (γr)
6. Coefficient of apparent expansion of a liquid is the ratio of the apparent increase in volume per 1°C rise of temperature to its initial volume.

The unit of  γa is °C-1.
7.  Coefficient of real expansion is the ratio between real increase in volume per 1°C rise of temperature and the original volume of the liquid.

13.  If γv = -ve, γa > γr, the level will increase continuously when heated.
14.  The real expansion of a liquid does not depend upon the temperature of the container.
15.  The apparent expansion of liquid depends on
a) initial volume or liquid,
b) rise in temperature
c) nature of liquid and
d) nature of container.
16.  γap is determined using specific gravity bottle or pyknometer or weight thermometer. 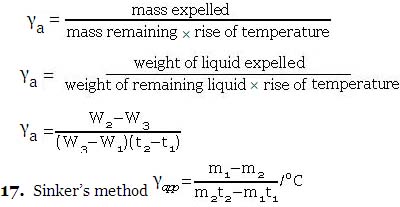 18.  To keep the volume of empty space in a vessel (volume vg) constant at all temperatures by pouring certain amount of a liquid of volume vl, the condition is vlγl = vgγg where γl = coefficient of cubical expansion of liquid and γg = coefficient of cubical expansion of vessel.
19.  The fraction of the volume of a flask that must be filled with mercury so that the volume of the empty space left may be the same at all temperatures is 1/7.
20. The density of a liquid usually decreases when heated. If d1 and d2 are the densities of a liquid at 0°C and t°C respectively, then 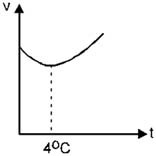 25.  Rubber shows anomalous expansion like water.
26.  Dilatometer is used to prove anomalous expansion of water.
27.  Aquatic animals are surviving in cold countries due to the anomalous expansion of water.
28.  During winter, in cold countries, even if the temperature falls far below 0°C, the water in the frozen lakes or seas at the bottom remains at 4°C.
29.  When water freezes, it expands and consequently water pipes burst in winter.
30.  When water at 4°C is filled to the brim of a beaker, then it over flows when it is either cooled or heated.
31. A beaker contains water at 4°C and a piece of ice is floating on it. When the ice melts completely, the level of water increases.
32.  When a solid is immersed in a liquid (which does not show anomalous expansion) its apparent weight increases with the increase of temperature.
33.  If W is the weight of a sinker in water at 0°C and W1 is weight in water at 4°C, then  W1 < < W
34.  As the temperature of water is increased from 0°C to 4°C, the apparent weight of a body decreases. At 4°C the apparent weight is minimum.

where l = length of the stem, v = initial volume of mercury in the bulb and Δt = rise in temperature.

DETERMINATION OF γreal OF A LIQUID :
39.  Specific gravity bottle method