* The number expressing the magnitude of a physical quantity is inversely proportional to the unit selected.

* The early systems of units : 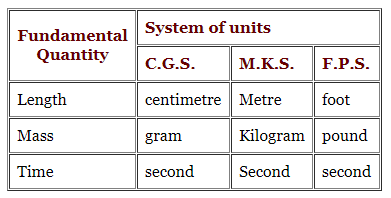 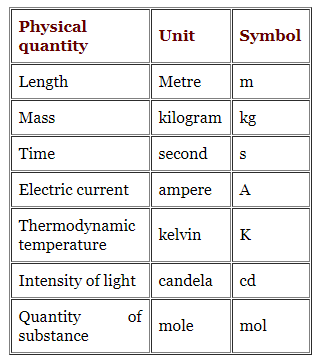 * SI units are used in scientific research. SI is a coherent system of units.

* A coherent system of units is one in which the units of derived quantities are obtained as multiples or submultiples of certain basic units.

* SI system is a comprehensive, coherent and rationalised M.K.S. Ampere system (RMKSA system) and was devised by Prof. Giorgi.
* Metre : A metre is equal to 1650763.73 times the wavelength of the light emitted in vacuum due to electronic transition from 2p10 state to 5d5 state in Krypton–86. But in 1983, 17th General Assembly of weights and measures, adopted a new definition for the metre in terms of velocity of light. According to this definition, metre is defined as the distance travelled by light in vacuum during a time interval of 1/299, 792, 458 of a second.

* Kilogram : The mass of a cylinder of platinum–iridium alloy kept in the International Bureau of weights and measures preserved at Serves near Paris is called one kilogram.

* Second : The duration of 9192631770 periods of the radiation corresponding to the transition between the two hyperfine levels of the ground state of caesium–133 atom is called one second.

* Ampere : The current which when flowing in each of two parallel conductors of infinite length and negligible cross–section and placed one metre apart in vacuum, causes each conductor to experience a force of 2 × 10–7 newton per metre of length is known as one ampere.

* Kelvin : The fraction of 1/273.16 of the thermodynamic temperature of the triple point of water is called kelvin.

¤ Candela : The luminous intensity in the perpendicular direction of a surface of a black body of area 1/600000 m2 at the temperature of solidifying platinum under a pressure of
101325 Nm–2 is known as one candela.

* Mole : The amount of a substance of a system which contains as many elementary entities as there are atoms in 12 × 10-3 kg of carbon–12 is known as one mole.

* Radian : The angle made by an arc of the circle equivalent to its radius at the centre is known as radian. 1 radian = 57o17l45ll.

* Steradian : The angle subtended at the centre by one square metre area of the surface of a sphere of radius one metre is known as steradian.

* The quantity having the same unit in all the systems of units is time.

* Fermi is the unit of length used to measure nuclear distances. 1 fermi = 10–15 metre.

* Light year is the unit of length for measuring astronomical distances.

* Barn is the unit of area for measuring scattering cross–section of collisions. 1 barn = 10–28 m2.

* PREFIXES : (or) Abbreviations for multiples and sub–multiples of 10. 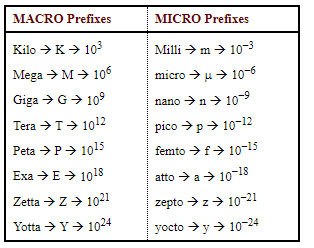 Note : The following are not used in SI system.

* Full names of the units, even when they are named after a scientist should not be written with a capital letter.
Eg : newton, watt, ampere, metre.

* Unit should be written either in full or in agreed symbols only.

* No full stop or punctuation mark should be used within or at the end of symbols for units.
Eg : 10 W but not 10 W.

* Dimensions of a physical quantity are the powers to which the fundamental units are raised to obtain one unit of that quantity.

* The expression showing the powers to which the fundamental units are to be raised to obtain one unit of a derived quantity is called the dimensional formula of that quantity.

* If Q is the unit of a derived quantity represented by Q = MaLbTc, then MaLbTc is called dimensional formula and the exponents a,b and c are called the dimensions.

* Dimensionless variables are those physical quantities which do not have dimensions and do not have fixed value.
Eg : Specific gravity, refractive index, coefficient of friction, Poisson’s ratio etc.
* Dimensional formulae are used to a) verify the correctness of a physical equation, b) derive relationship between physical quantities and c) to convert the units of a physical quantity from one system to another system.
* Law of homogeneity of dimensions : In any correct equation representing the relation between physical quantities, the dimensions of all the terms must be the same on both sides. Terms separated by ‘+’ or ‘–’ must have the same dimensions.
* A physical quantity Q has dimensions a, b and c in length (L), mass (M) and time (T) respectively, and n1 is its numerical value in a system in which the fundamental units are L1, M1 and T1 and n2 is the numerical value in another system in which the fundamental units are L2, M2 and T2 respectively, then

* Fourier laid down the foundations of dimensional analysis.

2. This method is not applicable to trigonometric, logarithmic and exponential functions.

4. In some cases, the constant of proportionality also possesses dimensions. In such cases we cannot use this system.

5. If one side of equation contains addition or subtraction of physical quantities, we can not use this method to derive the expression. 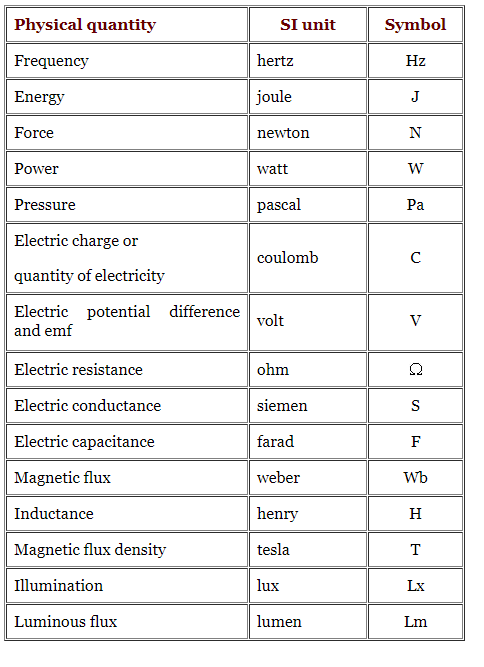 * Dimensional formulae for some physical quantities : 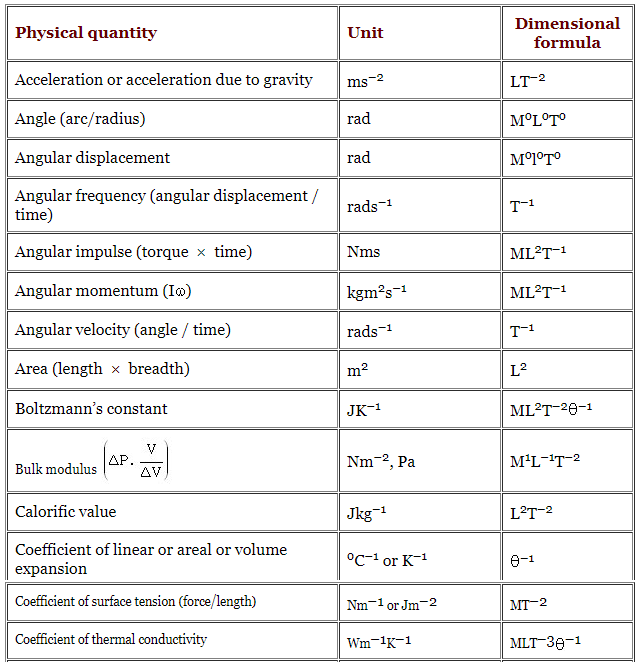 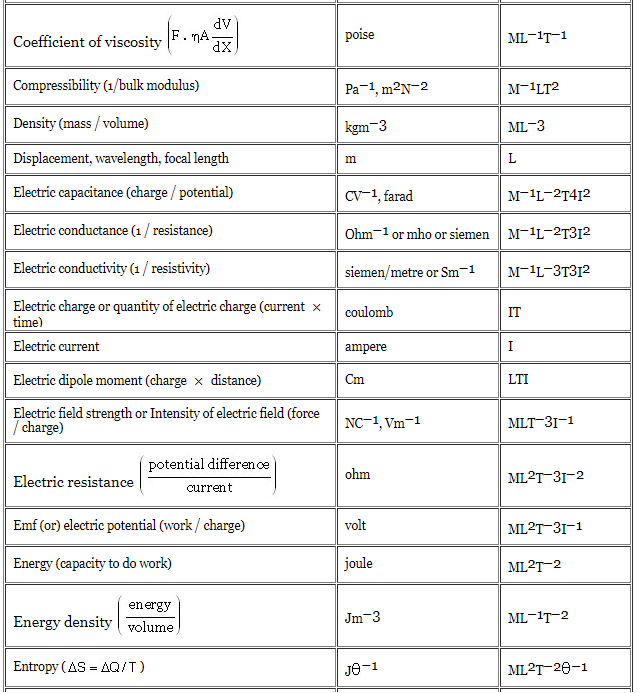 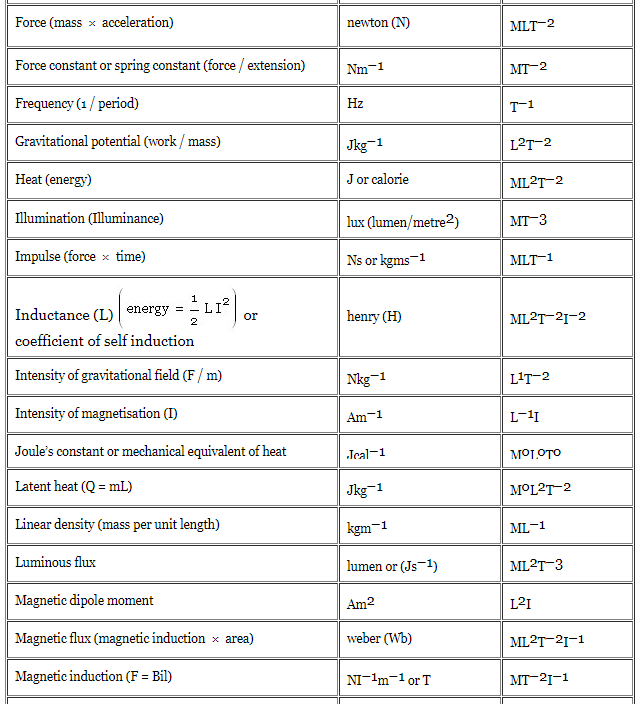 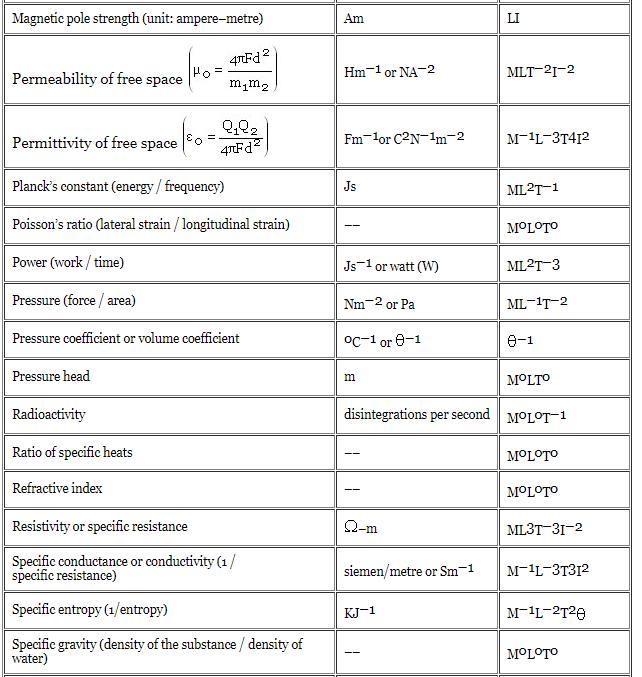 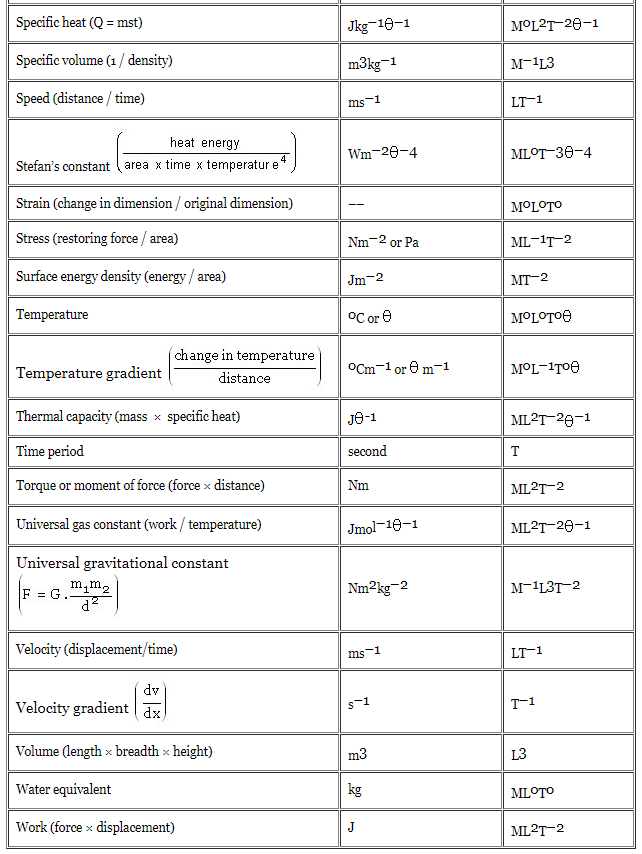 * Quantities having the same dimensional formulae :

a) impulse and momentum.