"The most impressive of human abilities is that of language"      - John D. Barrow.

Salient features of the different periods of English Language

Old English: In the 5th century two important tribes namely 'Angles' and 'Saxons' settled in the British islands.
* The people of these two tribes developed a friendship and the common language they spoke was called 'Anglo-Saxon'.
* This 'Anglo-Saxon' language gradually came to be called as Englisic' and the land where this language was spoken came to be recognised as 'Engla-land' and now called as England.
Old English had four major dialects:
1. North Umbrian        2. Mercian         3. West Saxon          4. Kentish
* Old English did not sound or look like the English of present day.

*'Beowulf' is the only source available written in old English.

Middle English Period: In 1066 William, the Duke of Normandy (part of modern France) conquered England. The new rulers called Normans, spoke Anglo - Norman.
* After the invasion of England the rulers and the upper class spoke Norman French where as the ruled (common people) spoke Anglo - Saxon (old English).
* Thus a blending of Anglo-Saxon, the language of the ruled and Anglo-Norman, the language of the rulers gave birth to Middle English.
* The most famous example of Middle English is Chaucer's "Prologue to Canterbury Tales".

* Great Vowel Shift was the distinct feature of the early Modern English phase. Great Vowel Shift distinguishes Modern English from Middle English.
* The Middle English has words with Vowels which are pronounced from the back of the mouth, where as the words in Modern English are pronounced from the front of the mouth.
* The Great Vowel Shift was first studied by Otto Jesperson, a Danish linguist and he coined the term.
* In the phase of modern English the first purely English Alphabetical dictionary "A Table Alphabeticall" was written by Robert Cawdrey in 1604. Later in 1755, Samuel Johnson's dictionary was published.
* In the late Modern English phase, the Industrial Revolution and expansion of British empire resulted in the development of English language borrowing many words from several languages. It is still in progress and continues to progress.

Key Points of The Topic

* English belongs to the Germanic branch of Indo-European family of languages.
* Old English is the other name for Anglo- Saxon language.
* A combination of Anglo-Saxon and Anglo- Norman gave birth to Middle English.
* Great Vowel Shift - a change in the pronunciation was studied by Jesperson. He was instrumental to coin the term.
* "A Table Alphabeticall' - the first English dictionary was written by Robert Cawdrey.
* Language is primarily speech, human and non-instinctive.
* Language is a macro system consisting of four micro systems - Phonology, Morphology, Syntax and Semantics.
* Language has many distinctive features - such as - creativity, asbitrariness, redundancy and prevarication.

It is almost difficult to say anything about the origin of language. Several theories have been expounded in support of its origin and nature but all are based on speculation and guess.
* According to 'Divine Gift theory', language is the gift of god. Not only in India but in many countries the people believe that divine is the source of origin of language.
* Another view is that the cries of animals, noises of birds served as a source of inspiration to the primitive man to express himself, through speech. This theory is known as 'Bo-bo theory'. It is also called imitation theory.
* Another theory with regard to the evolution of language concerned is 'Ding-dong theory'. The sound ding-dong is associated with the ringing of the bell. This theory believes that there is an inherent quality in certain objects to force the man to elicit certain sounds resembling the sounds of those objects.
* The ‘Yo-he-Ho theory' is one which assumes certain kind of physical exertions produce certain sounds which give a feeling of relief to our system. The uttering of sounds like 'Hayi-sha' helped the man to evolve the language.

* Just as various systems of our body - heart, lungs, hands, eyes etc. though different, yet work in coordination. Similarly the system of language functions with the coordination of sounds, words, structures and finally gives a message.

b) Language is arbitrary: The meaning of the term, 'arbitrary' can be understood as illogical.
Language chooses its own system of speech sounds and has words for different objects. There is no direct connection between the sound or form of any word and the object it represents. The following illustration reflects the arbitrariness of language. 'CAT' in Different Languages:
* It is evident from the above illustration that English name 'Cat' given to that animal is not the same in other languages. Hence words and their meanings have no natural connection and so it is arbitrary. 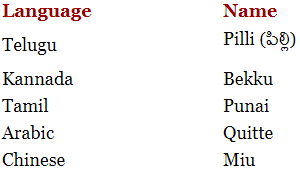 c) Language is creative: The word 'creative' refers to the capacity of language users to produce and understand an indefinitely large number of sentences of which we have not heard or used before.

d) Language exhibits redundancy: The repetition of the same idea or item of information with in a phrase or clause of a sentence is called redundancy in language. Language has the ability to repeat an idea without using the same words and structures.
Eg: Cut it out! ('out' is redundant) advance planning ('advance') added bonus ('added')

e) Displacement: Language exhibits displacement.
Displacement means an ability to express or speak about things that are not physically present. We can talk about fairies, angels, heaven, hell etc. which we have never seen and learnt only from the scriptures.

f) Language transmits culture: Language is said to be an agent or custodian of culture. It is the most important tool for transmitting culture from one generation to the other. Infact culture and language are intrinsically intertwined that the loss of one leads to the loss of the other. We have all learnt English and hence we use terms / phrases like - thank you, sorry, yes, no, OK, sure etc. frequently than others who have not learnt English. Using expressions like these is a sign of acquiring the culture of language we have learnt.

g) Language exhibits prevarication:
Language helps us to be imaginative and creative. We can tell fairy tales and fables which are not really true. Lot of imagination and creativity take place while narrating these type of stories. Hence we can assume that human languages provide a scope to give false messages.