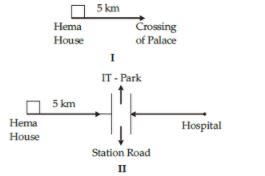 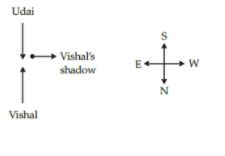 Directions (Q. 4-7) : Read the following information carefully and answer the questions that follows :
• Six flats on a floor in two rows facing North and South are allotted to P, Q, R, S, T and U.
• Q gets a North facing flat and is not next to S.
• S and U get diagonally opposite flats.
• R next to U, gets a south facing flat and T gets North facing flat.
4. If the flats of P and T are interchanged then whose flat will be next to that of U?
Ans: R
Explanation:

6. The flats of which of the other pair than SU, is diagonally opposite to each other?
Ans: QP
Explanation:

7. Whose flat is between Q and S?
Ans: T
Explanation: 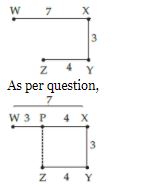 11. Y is in the East of X which is in the North of Z. If P is in the South of Z, then in which direction of Y, is P?
Ans: North-West
Explanation:

12. Rahul put his timepiece on the table in such a way that at 6 P.M. hour hand points to North. In which direction the
minute hand will point at 9.15 P.M. ?
Ans: West
Explanation:

15. Which one is in the North-East of the person who is to the left of Kumar?
Ans: Pintu
Explanation:

Ankur is in the left of Kumar. Hence Pintu is in North-East of Ankur.

Hence P is in South-West of X.

18. According to M # N $ T, T is in which direction with respect to M?
Ans: North-East
Explanation:

Hence T is in the North-East of M.

Hence U is in North direction with respect to P.

21. If A is 7m to the west of T, then which of the following will be nearest point to A.
Ans: U
Explanation: 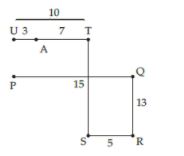 22. In which direction R with respect to P
Ans: South east
Explanation:

Directions (Q. 23-24) : Read the following information carefully and answer the questions that follows :
A walked 20m towards south and then took a left turn and walked 40m. Again he took left turn and walked 15m. Finally he turned right and walked 10m and stopped.
23. How far is he from starting point ?
Ans: 50.25m
Explanation:

24. In which direction A is now facing
Ans: East
Explanation:

A is facing East direction.