* Angiology: Study of blood vessels.
* Angiography or arteriography is a medical imaging technique used to visualize the inside, or lumen, of blood vessels and organs of the body, with particular interest in the arteries, veins, and the heart chambers. This is traditionally done by injecting a radio-opaque contrast agent into the blood vessel and imaging using X-ray based techniques such as fluoroscopy.

i. Blood vessels are three types
a. Arteries
b. Veins
c. Blood capillaries

a. Arteries: Arteries are blood vessels that carry blood away from the heart. While most arteries carry oxygenated blood, there are two exceptions to this, the pulmonary and the umbilical arteries. The effective arterial blood volume is that extracellular fluid which fills the arterial system. These are 3 types.

Oarta: The aorta is the main artery in the human body, originating from the left ventricle of the heart and extending down to the abdomen, where it splits into two smaller arteries (the common iliac arteries). The aorta distributes oxygenated blood to all parts of the body through the systemic circulation.

b. Veins: In the circulatory system, veins are blood vessels that carry blood toward the heart. Most veins carry deoxygenated blood from the tissues back to the heart. Exceptions are the pulmonary and umbilical veins, both of which carry oxygenated blood to the heart. In contrast to veins, arteries carry blood away from the heart.
Veins are less muscular than arteries and are often closer to the skin. There are valves in most veins to prevent backflow. There are 4 types of veins.

The coronary sinus: The coronary sinus is a collection of veins joined together to form a large vessel that collects blood from the heart muscle (myocardium). It delivers deoxygenated blood to the right atrium, as do the superior and inferior vena cavae. It is present in all mammals, including humans.

Pulmonary vein: Pulmonary veins are a group of blood vessels that drain oxygenated blood from lungs and return it to heart. The word 'pulmonary' comes from the Latin root 'pulmo,' meaning 'of or relating to the lungs.'

c. Blood capillaries:
The blood capillaries are where the important functions of the circulation take place - the exchange of material between circulation and cells. Capillaries are the smallest of the body's blood vessels. They are only one cell thick, and they are the sites of the transfer of oxygen and other nutrients from the bloodstream to other tissues in the body.
They also collect carbon dioxide waste materials and fluids for return to the veins. They connect the tiny muscular branches of arteries called arterioles, with tiny veins (called venules). Ultimately, the capillary is the site of internal or cellular respiration and is responsible for the utilization of oxygen by the tissue and the transporting of carbon dioxide as waste to the veins for elimination by the lungs.
The arterial blood system branches extensively to deliver blood to over a billion capillaries in the body. The extensiveness of these branches is much more readily appreciated by knowing that the capillaries provide a total surface area of 1,000 square miles for exchanges of gases, waste, and nutrients between blood and tissue fluid.
Oxygen rich blood flows from arterioles or small branches of the artery into the capillary bed and the pressure inside of the arteries is roughly fifty times that on the inside of the veins.
It is this pressure difference that forces the blood into the capillary bed. Although the amount of blood flowing through a particular capillary bed is determined in part by a small circular muscle around the arteriole branches, the absence of smooth muscle and connective tissue layers permits a more rapid rate of transport between the blood and the tissue.

ii. Valves:
There are four heart valves. All are one-way valves. Blood entering the heart first passes through the tricuspid valve and then the pulmonary valve. After returning from the lungs, the blood passes through the mitral (bicuspid) valve and exits via the aortic valve. 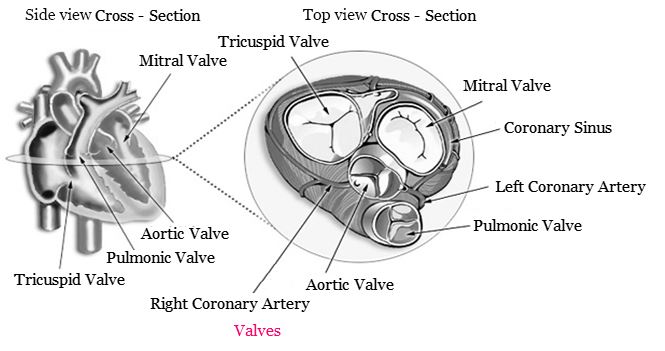