Overview of the Human Nervous System

The nervous system has three main functions- sensory input, integration of data and motor output. Sensory input is when the body gathers information or data, by way of neurons, glia and synapses. The nervous system is composed of excitable nerve cells (neurons) and synapses that form between the neurons and connect them to centers throughout the body or to other neurons. These neurons operate on excitation or inhibition and although nerve cells can vary in size and location, their communication with one another determines their function. These nerves conduct impulses from sensory receptors to the brain and spinal cord. The data is then processed by way of integration of data, which occurs only in the brain. After the brain has processed the information, impulses are then conducted from the brain and spinal cord to muscles and glands, which is called motor output. Glia cells are found within tissues and are not excitable but help with myelination, ionic regulation and extracellular fluid.
The nervous system is comprised of two major parts.
i. Central Nervous System (CNS)
ii. Peripheral Nervous System (PNS)
The CNS has various centers located within it that carry out the sensory, motor and integration of data. These centers can be subdivided to Lower Centers and Higher Centers communicating with the brain via effectors. The PNS is a vast network of spinal and cranial nerves that are linked to the brain and the spinal cord. It contains sensory receptors which help in processing changes in the internal and external environment. This information is sent to the CNS via afferent sensory nerves.
The PNS is then subdivided into the autonomic nervous system and the somatic nervous system. The autonomic has involuntary control of internal organs, blood vessels, smooth and cardiac muscles. The somatic has voluntary control of skin, bones, joints, and skeletal muscle. The two systems function together, by way of nerves from the PNS entering and becoming part of the CNS, and vice versa. 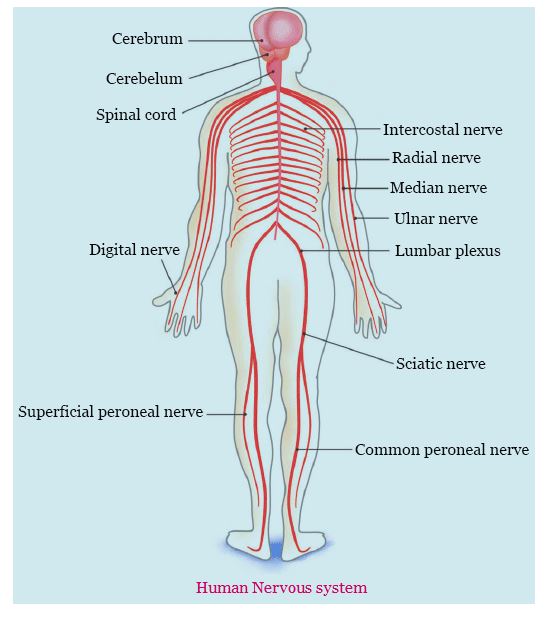