All the billions of neurons in the nervous system have three basic parts. The nerve cell body contains the nucleus of the cell along with cytoplasm and organelles (e.g., mitochondria and ribosomes). The nerve cell body supplies the other two parts of the neuron with the materials and energy they need. It can also pick up messages from other neurons.
One or more extensions called dendrites project from the nerve cell body. Each dendrite can branch up to several hundred times. Like nerve cell bodies, dendrites can pick up messages from other nerve cells. They are also the parts of the sensory cells that monitor conditions. A dendrite being activated by another neuron or by a stimulus starts nerve impulses that travel along the dendrite to the nerve cell body, which passes the impulses to the third part of the neuron- the axon.
Each neuron has only one axon, which extends out from the nerve cell body. Each axon may have up to several hundred branches (axon collaterals). The impulses that are passed to the axon travel the entire length of each of its branches. Each branch then passes the impulses to another structure. Axons can pass impulses to other neurons, muscle cells, and gland cells, although all the branches from one neuron's axon can go to only one of these types of cells. 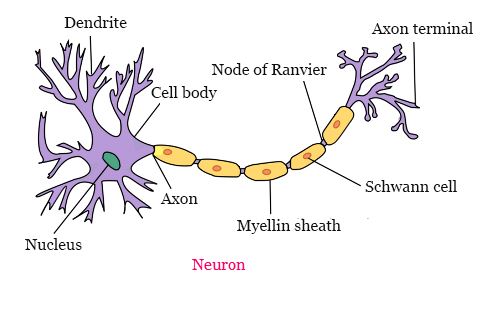