All neurons perform three main functions. Those are-
* Reception involves having impulses generated in response to environmental conditions or messages from other neurons. Dendrites and nerve cell bodies are the parts that usually perform reception.
* The second function is conduction. It refers to the movement of impulses along the neuron to the end of the axon. Conduction in longer dendrites and axons occurs through a special mechanism called an action potential. This mechanism involves several activities of the neuron cell membrane that carefully control the inward and outward movement of ions, especially sodium and potassium ions.
* Once impulses have been conducted to the end of the axon, they are passed to the next structure by the third neuron function- transmission. The place where transmission occurs between neurons is called a synapse. Transmission to muscle cells occurs at neuromuscular junctions, and transmission to gland cells takes place at neuro glandular junctions. The process of transmission is essentially the same in all three cases. 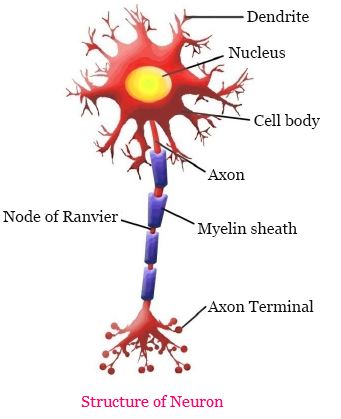