There are four types of joints that are important in physical activity and sport.
a. Ball and socket joint
One end of a bone is shaped like a ball, and fits into a hollow socket at the end of another bone. The joint is held together by ligaments and tendons. Also a synovial joint is contained inside a capsule of synovial fluid, with hyaline cartilage on the 2 surfaces of the joint.
These are found in the shoulder and the hip. They allow a circular movement in these joints. At the shoulder the 'ball' is part of the humerus, the long bone in the upper arm. The 'socket' is formed by the scapula or the shoulder blade. The muscles joined to these bones allow a circular movement when they contract. In the hip it is the femur which provides the 'ball'. The pelvis, or hip bone, provides the socket.
Ball-and-socket joints are classified functionally as multi-axial joints because they can move bones along several axes. The muscles that surround the joints permit the humerus and femur to move away from the body’s midline (abduction), toward the body’s midline (adduction), forward (flexion), and backwards (extension). 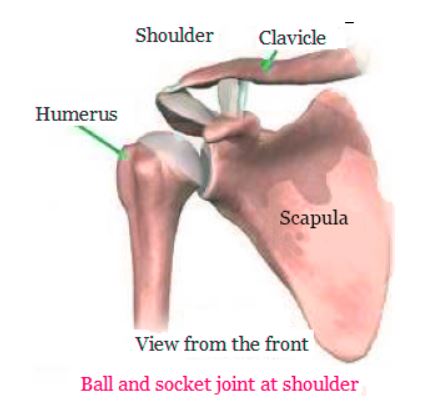 b. Hinge joint
A hinge joint is a common class of synovial joint that includes the ankle, elbow, and knee joints. Hinge joints are formed between two or more bones where the bones can only move along one axis to flex or extend.
The simplest hinge joints in the body are the interphalangeal joints found between the phalanges of the fingers and toes. In these hinge joints, the bones are able to flex to decrease the angle between them - like when making a fist or curling the toes - and extend to increase their angle to about 180 degrees. 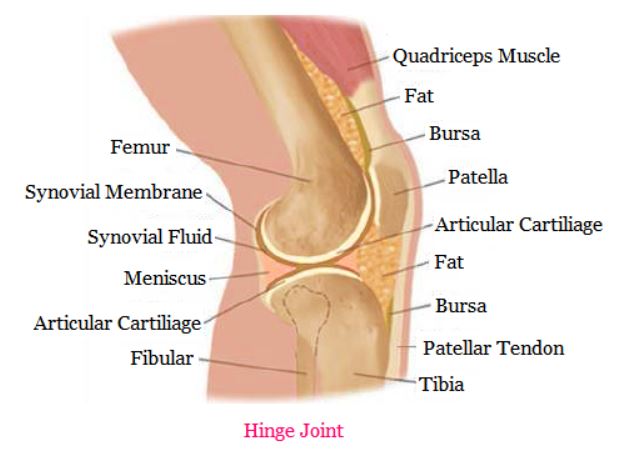 The elbow joint is a joint in the human body. This connects the upper portion of the arm, which is called the humerus, to the ulna, or the lower part. Thus, it is called the humeroulna joint in the medical community. The humeroulnar joint is placed in between the trochlear notch of ulna and the trochlea of the humerus.
Interfalangeal joints are simply the joints that connect the fingers together in the human body.
The knee joint attaches the thigh of a person to the lower leg. Because it is the largest joint in the human body, it is a relatively complicated joint to understand in terms of connection and motion. It is different from other hinge joints, except for the ankle, because it allows for some slight side-to-side movement rather than simply flexion and extension.
The jawbone is another complicated hinge joint. Although it is a hinge joint primarily allowing to open and close mouth is exhibiting some movement side to side. Like the knee and ankle joint, it can also exhibit a certain amount of rotary movement which is characteristic of a number of other types of joints such as the ball-and-socket joints.

c. Gliding joint
The gliding joint, also called a plane joint or arthrodial joint, is a type of joint in which the articulating surfaces of the involved bones are flat or only slightly curved.
The ends of the bones that connect in the joint are called articulating surfaces. The unique, flat shape of the articulating surfaces in a gliding joint let the bones slide over one another, often allowing a large range of motion.
These joints are present in the spine, wrist, foot, and the clavicle. Gliding joints allow the bones to glide past one another in any direction along the plane of the joint up and down, left and right, and diagonally.
Many gliding joints are formed in the appendicular skeleton between the carpal bones of the wrist, between the carpals and the metacarpals of the palm, betweenthe tarsal bones of the ankle and between the tarsals and the metatarsals of the foot.

d. Pivot joint
A pivot joint works by the end of one bone having a ‘peg’ that fits into a ‘ring’ formed by the other bone.
Pivot joint is also called rotary joint, in vertebrate anatomy a freely moveable joint (diarthrosis) that allows only rotary movement around a single axis. The moving bone rotates within a ring that is formed from a second bone and adjoining ligament. The pivot joint is exemplified by the joint between the atlas and the axis (first and second cervical vertebrae), directly under the skull, which allows for turning of the head from side to side. 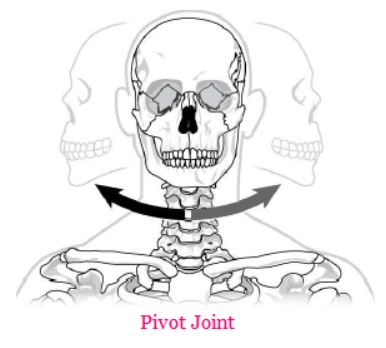 Pivot joints also provide for the twisting movement of the bones of the forearm (radius and ulna) against the upper arm, a movement used, for instance, in unscrewing the lid of a jar. The neck, or cervical, joints, and the elbow, or radio lunar joints are true pivot joints.