Parts of the flowers

Flower is an important organ of a plant.
E.g.: Lotus, Jasmine and Rose
All these flowers have different colors, sizes, shapes and smell. In fact, plants can be recognized because of their color, shape and smell of the flowers.

The basic parts of the flower
i. Pedicel
A pedicel is a stem that attaches flowers to the main stem of an inflorescence. They are the branches or stalks that hold the flower in the inflorescence containing more than one flower. These are held up by peduncles. In the absence of a pedicel, the flowers are described as sessile. It has a flat structure on the other end known as thalamus. 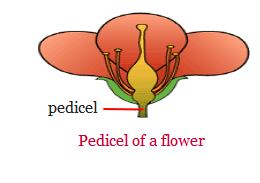 ii. Sepals
A sepal is a part of the flower of angiosperms. These are usually green in color. These are typically functions as protection for the flower in bud, and often as support for the petals when in bloom. 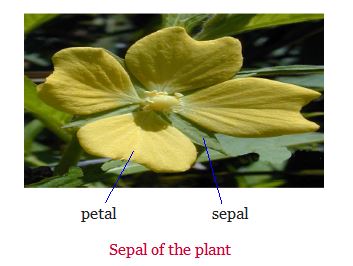 iii. Petals
These are modified leaves that surround the reproductive parts of flowers and are often brightly colored or usually shaped to attract pollinators. All of the petals of a flower are called a corolla. These are accompanied by a set of special leaves called sepals, collectively form the calyx and lie just beneath the corolla. The corolla and calyx together make up the Perianth. Petals and sepals collectively called as tepals. 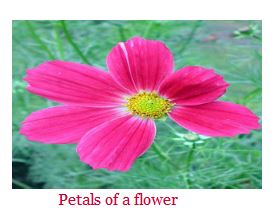 The petals attract the insects and help in the process of reproduction.
iv. Stamens
The stamen is the pollen producing reproductive organ of a flower. It typically consists of a stalk called the filament and an anther, which contains microsporangia. These are the male organs of the flowers.
Commonly anthers are two lobed and are attached to the filament either at the base or in the middle portion. The sterile tissue between the lobes is called the connective. The stamens in a flower are collectively called the androecium. 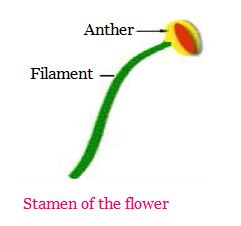 v. Pistil
Pistil is the female reproductive part of a flower. It is centrally located, typically consists of a swollen base, the ovary, which contains the potential seeds or ovules. It contains stigma, style, ovary and ovules. 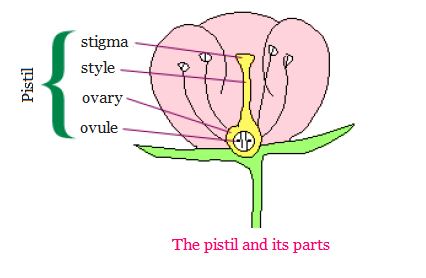 Key points
* It has a bulbous base containing the ovules, which develop into seeds after fertilization of egg cells in the ovule.
* It is composed of one or more highly modified leaves, each containing one or more ovules.