A male has just two reproductive structures, the penis and the scrotum. The penis has three columns of tissue one on either side or a third on the bottom side that can become engorged with blood, causing erection and making copulation possible. In most animal species, including dogs, walruses and most primates other than humans, a bone (known as a baculum) is present in the penis and contributes to its stiffness. The scrotum, generally on the outside of the body in the pelvis region is a sac containing the two testes (sing. testis; also called testicles), the site of sperm production. Each testis is made up of highly coiled seminiferous tubules lined with cells, called spermatogonia, that are the site of sperm production. It is in cells between the seminiferous tubules where testosterone, the principal male sex hormone and other androgens are produced. Testosterone stimulates sperm production. 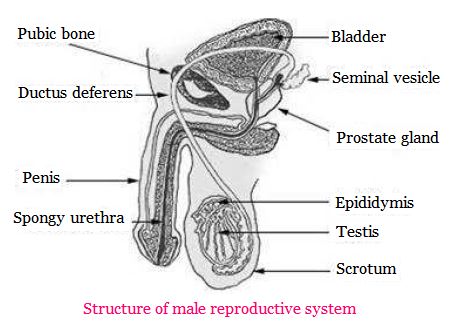 Connected to the seminiferous tubules is the epididymis, a 15- to 20-foot-long coiled tube, in each testis, where sperm mature. The epididymis in each testis is linked to a vas deferens, a tube of smooth muscle tissue that passes from the testis into the body. The vas deferens from each testis connects to a single ejaculatory duct, which continues into the urethra, a duct passing through the penis and through which semen and urine are expelled.
Three other important male reproductive structures produce secretions that make up semen. These include the prostate gland, located just below the urinary bladder, which secretes into the urethra a milky, basic fluid containing enzymes and sperm nutrients that makes up just under one-third of the volume of the ejaculate. A pair of seminal vesicles, secrete into the semen nutrients for the sperm, as well as substances that increase sperm motility and make the female reproductive tract more hospitable to sperm. And finally a pair of bulbourethral glands located just below the urethra near the base of the penis, contribute the remaining 1% or so of the ejaculate, as well as a mixture of mucus and sugar that lubricates the tip of the penis prior to copulation.
The gametes are produced by cells that undergo meiosis. Diploid cells, the spermatogonia are present in the highly coiled seminiferous tubules of the testes. Each spermatogonium divides by mitosis to produce two cells.

i. Gametogenesis in male
The gametes are produced by cells that undergo meiosis. Diploid cells, the spermatogonia are present in the highly coiled seminiferous tubules of the testes. Each spermatogonium divides by mitosis to produce two cells.
One of these cells is another spermatogonium, so the male never runs out of a store of sperm-producing cells; the other is a primary spermatocyte, which undergoes meiosis, in the first step of sperm production. Each primary spermatocyte produces two cells in the first meiotic division. These two cells are called secondary spermatocytes and they then complete the second meiotic division, each producing two spermatids. The four spermatids produced by each spermatogonium, as products of meiosis are haploid. As each spermatid matures into a sperm cell, it moves from the seminiferous tubules to the epididymis, where over the course of approximately 18 hours, the sperm become motile that is, they become able to move. 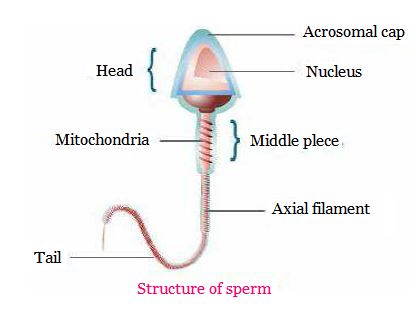 Each sperm cell consists of three primary parts, they are
* The head region, containing the sperm cell’s nucleus with its DNA, plus a cap-like acrosome containing enzymes that can break down the protective layers surrounding an egg.
* The body region, which contains many energy generating mitochondria.
* The tail, a flagellum that propels the sperm through the fluid in the female reproductive tract.