Externally, a female has just two structures, the clitoris and the labia, which develop from the same embryonic tissue that in males produces the penis and scrotum. There is also a vaginal opening. Internally, the vagina is a tube-like chamber into which sperm are released during copulation. The vagina connects with the uterus, also called the womb, which resembles an upsidedown pear. The lower, narrowest portion of the uterus is called the cervix. The lining of the uterus, rich with blood vessels, is the endometrium, and this is where a fertilized egg implants and is nourished. The uterus is also where an embryo develops throughout pregnancy. 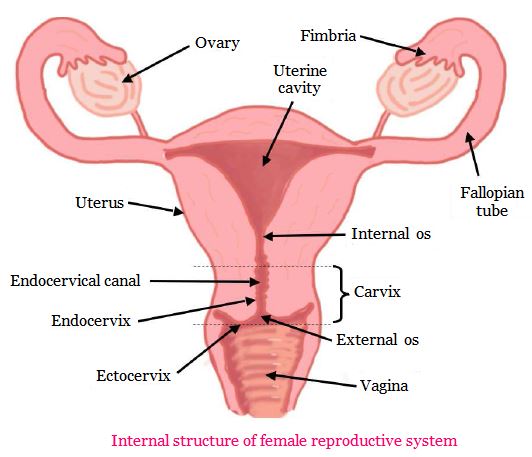 Connecting to the top of the uterus on the left and right sides are the Fallopian tubes or oviducts. Each Fallopian tube extends outward and is funnel-shaped near its end where the ovaries lie, held in place by thin membranes. Each ovary is about the size of a large olive.

i. Gametogenesis in females
The process of gametogenesis in females called oogenesis starts in the ovaries prior to birth that is, while the female is still a fetus. Here, diploid cells called oogonia multiply by mitosis. Each oogonium then begins meiosis, but stops at prophase I, at which point the cell is called a primary oocyte and is contained within a follicle, the small structure in which an egg will form. At birth, there are approximately one million follicles present in a female’s ovaries, each follicle containing a primary oocyte. 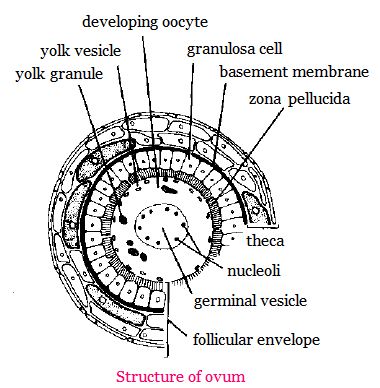 The primary oocytes remain in their hibernation-like state until puberty. At that point, periodic bursts of follicle stimulating hormone (FSH) cause several primary oocytes to  complete meiosis I. Unlike in the production of sperm, however, when the primary oocyte divides into two cells, although the pairs of homologous chromosomes split evenly, nearly all of the cytoplasm goes to one of the cells, now called a secondary oocyte. The other cell, known as a polar body, gets almost no cytoplasm and eventually disintegrates. At this point, meiosis again stops.
When female’s ovulate, generally a single follicle in one ovary ruptures, releasing the secondary oocyte, which still has not completed meiosis. The secondary oocyte, which at this point can be called an egg, is swept by cilia into the Fallopian tube and carried down toward the uterus. If sperm have been deposited in the vagina during copulation, it is in the Fallopian tube that the sperm, swimming up from the vagina and through the uterus, are most likely to fertilize the egg. It is only after fertilization that a secondary oocyte is triggered to finally complete meiosis once again with an unequal division of cytoplasm. One of the resulting cells, the ovum, receives most of the cytoplasm, while the other receives almost none. This second polar body disintegrates just as the first polar body did. The haploid ovum now fuses with the haploid nucleus of the sperm, forming a diploid fertilized egg called a zygote.