i. Gymnosperms:
The gymnosperms were the first seed plants and bear their ovules and seeds exposed on the plant surface. This is in marked contrast to the more recent group of seed plants, the flowering plants, which have their ovules sealed within the flower and their seeds contained within a fruit. The name gymnosperm describes this feature. It literally means naked seed. 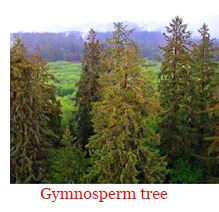 Typically, a sporophyte has a stem with roots and leaves and bears the reproductive structures. As vascular plants, gymnosperms contain two conducting tissues, the xylem and phloem. The xylem conducts water and minerals from the roots to the rest of the plant and also provides structural support. The phloem distributes the sugars, amino acids, and organic nutrients manufactured in the leaves to the nonphotosynthetic tissues of the plant.
* In most gymnosperms the male pollen cones, called microstrobili, contain reduced leaves called microsporophylls. Microsporangia, or pollen sacs, are borne on the lower surfaces of the microsporophylls. The number of microsporangia may vary from two in many conifers to hundreds in some cycads. Within the microsporangia are cells which undergo meiotic division to produce haploid microspores.
* The gametophyte phase begins when the microspore, while still within the microsporangium, begins to germinate to form the male gametophyte. A single microspore nucleus divides by mitosis to produce a few cells. At this stage the male gametophyte (called a pollen grain) is shed and transported by wind or insects.

* Female ovulate cones, called megastrobili, may be borne on the same plant that bears microstrobili (as in conifers) or on separate plants (as in cycads and Ginkgo). A megastrobilus contains many scales, called megasporophylls, that contain megasporangia. Within each megasporanium, a single cell undergoes meiotic division to produce four haploid megaspores, three of which typically degenerate. The remaining megaspore undergoes mitosis to form the female gametophyte. As the number of free nuclei multiplies, the megasporangium and megaspore wall expand. At this stage the ovule is ready to be fertilized.
* Before fertilization can take place, however, the mature male gametophyte (the pollen grain) must be transported to the female gametophyte—the process of pollination. In many gymnosperms, a sticky "pollination droplet" oozes from a tiny hole in the female megasporangium to catch pollen grains. The droplet is then resorbed into the megasporangium for fertilization. In other species, the pollen grain settles on the surface of the megasporangium, where the male gametophyte develops further. A pollen tube emerges from the grain and grows through the megasporangium toward the multicellular egg-containing structure called the archegonium. The egg and sperm continue to mature, the nucleus of the latter undergoing additional divisions resulting in two male gametes, or sperm. Interestingly, cycads and Ginkgo are the only seed plants with flagellated sperm. By the time the pollen tube reaches the archegonium, both the egg and sperm are fully mature, and the egg is ready to be fertilized.

* In gymnosperms, when the nuclei of the two sperm meet the egg cell, one nucleus dies and the other unites with the egg nucleus to form a diploid zygote. The fertilized egg undergoes mitosis to begin the development of a new sporophyte generation—the multicellular embryo of the seed. Food for the developing embryo is provided by the massive starch-filled female gametophyte that surrounds it. The time interval between pollination and maturation of the embryo into a new sporophyte generation varies among different groups, ranging from a few months to over one year (in pine, for example).
* In gymnosperms such as cycads and Ginkgo, the seed coat is known as the sarcotesta and consists of two layers. The sarcotesta is often brightly coloured in cycads and the sarcotesta of Ginkgo seeds is foul-smelling when ripe. The seeds of some conifers have a thin winglike structure that may assist in the distribution of the seed. Others, such as yews, have a fleshy structure, known as an aril, surrounding the seed. The cones of juniper are fleshy and commonly eaten by birds.
* At maturity, a gymnosperm embryo has two or more seed leaves, known as cotyledons. Cycads, Ginkgo, and gnetophytes have two cotyledons in the embryo; pine and other conifers may have several (eight is common; some have as many as 18).

In cycads and Ginkgo the cotyledons remain within the seed and serve to digest the food in the female gametophyte and absorb it into the developing embryo. Conifer cotyledons typically emerge from the seed and become photosynthetic.

Types of Gymnosperms:
All gymnosperms are found in four major divisions of plants. The divisions are
a) Ginkgophyta
b) Cycadophyta
c) Gnetophyta
d) Coniferophyta

a) Ginkgophyta:
The division Ginkgophyta contains the Ginkgo Biloba or Maidenhair tree. These trees were originally only found in China but have now been propagated all around the world. They grow to be approximately 20 - 35 meters high and are easily recognized by their fan-shaped leaves. The trees are either male or female. Ginkgo trees do not produce cones. Their seeds begin as two ovules that grow on the end of a stalk. Once the ovules are fertilized by pollen carried in the wind, they grow into a light yellow-brown seed that falls to the ground and are known for their awful smell, which is often said to resemble dog feces or vomit.

b) Cycadophyta:
The division Cycadophyta contains the plants commonly known as cycads. The cycads thrived during the Jurassic period, but only a few species live today. These plants are characterized by a large crown of leaves and a stout, thick trunk. They are found in most tropical or sub-tropical parts of the world and are commonly confused with ferns or palms. Their seeds grow on short stalks called strobili at the center of the plant and are pollinated by the wind.

c) Gnetophyta:
The plant division Gnetophyta consists of only three genera of woody plants grouped in the gymnosperms. The living gnetophytes are a handful of survivors of a group that was diverse and dominant in the Tertiary, and fossilized pollen attributed to a close relative of one of them, Ephedra, has been identified in the Early Cretaceous. They now comprise some 70 species across the three relict genera Gnetum (family Gnetaceae), Welwitschia (family Welwitschiaceae), and Ephedra (family Ephedraceae).
The gnetophytes differ from other gymnosperms in having vessel elements (which transport water within the plant) like those found in flowering plants. As a group the Gnetophyta are the gymnosperms' closest relations to the flowering plants.

Among themselves, the gnetophytes' evolutionary inter-relationships remain unclear, however: in some classifications, all three genera are placed in a single order (Gnetales), while in other classifications they are distributed among three orders, each containing a single family and genus. Most morphological and molecular studies confirm that Gnetum and Welwitschia diverged from each other more recently than from Ephedra.

d) Coniferophyta:
The most widespread of the gymnosperms are the conifers: 50 genera and over 550 species. They can found world-wide under varying conditions. In the Americas they dominate the forests of the US West and Canada, then drop down the eastern coast dominating in the early successional stages; they continue and dominate the coastal and dry sandy forests of the SE.
Typically they are found under what we would consider the less productive conditions of either long cold seasons, dry areas or nutrient deficient soils (sandy, less mature soils of the west or acidic swampy mucks).
Their history extends back to the late Carboniferous (300 MYA) where their drought resistant features might have been critical during their evolution during the Permian when the earth turned cold and dry. 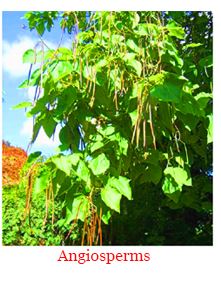 The flowering plants or angiosperms emerged in the Cretaceous period, some 130 million years ago. Their origin Charles Darwin described as "that abominable mystery". These sporophytes dominate the landscape around us and are the most successful plant group, with something like a quarter of a million species described. Angiosperm means "contained seeds" and unlike the previous seed plants examined, the ovules are sealed within the carpel and the seeds sealed within a fruit.

* A great advantage for angiosperms is the production of endosperm. Endosperm is a material that forms after fertilization and serves as a highly nutritional food source for the developing seed and seedling.