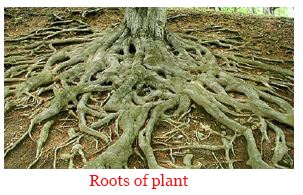 In vascular plants, the root is the organ of a plant that typically lies below the surface of the soil. However, roots can also be aerial or aerating. Furthermore, a stem normally occurring below ground is not exceptional either. Therefore, the root is best defined as the non-leaf, non-nodes bearing parts of the plant's body.

The first root that comes from a plant is called the radicle. The four major functions of roots are...
1. Absorption of water and inorganic nutrients,

2. Anchoring of the plant body to the ground, and supporting it,
3. Storage of food and nutrients,
4. Vegetative reproduction.
The root system is of two types, they are
i. Tap root system
ii. Fibrous root system

i. Tap root system
In a plant the taproot is the largest, most central, and most dominant root from which other roots sprout laterally. Typically a taproot is somewhat straight and very thick, is tapering in shape, and grows directly downward. 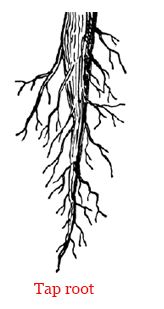 Key points
* The taproot system contrasts with the adventitious or fibrous root system of plants with many branched roots.
* But many plants that grow a taproot during germination go on to develop branching root structures, although some that rely on the main root for storage may retain the dominant taproot for centuries.

Key points
* Most trees begin life with a taproot, but after one to a few years change to a wide-spreading fibrous root system with mainly horizontal surface roots and only a few vertical, deep anchoring roots.
* A typical mature tree 30 - 50 m. tall has a root system that extends horizontally in all directions as far as the tree is tall or more, but well over 95% of the roots are in the top 50 cm depth of soil.