A leaf is an organ of a vascular plant and is the principal lateral appendage of the stem. The leaves and stem together form the shoot. Foliage is a mass noun that refers to leaves collectively.

Key points
* A leaf has evolved, chemically and structurally, to optimize photosynthesis.
* The overall function of the biochemical process of photosynthesis is to absorb light energy and convert it into chemical bond energy that is then useable by the plant; this chemical bond energy is within the glucose sugar which is synthesized by the photosynthetic process.
* Thus, it is sometimes said that a plant gets its "food" (glucose) from sunlight. The "inputs" required by photosynthesis are light, carbon dioxide and water, and the "outputs" produced are glucose and oxygen.
* The biggest leaf in the world is Victoria regia.
* The smallest leaf in the world is Ficus lyrata.

i. Leaf and its functions
The plant leaves are lateral outgrowth of the stem which develop from the meristematic tissues of buds. They are the part of the plant shoot which serves as the chief food-producing organ in most vascular plants. To perform this function more efficiently, they are arranged on the stem and oriented as to allow maximum absorption of sunlight.
The leaves may be considered as the most important life-giving part of the plant body. The carbohydrate that is produced in the leaves in the process of photosynthesis sustains animal life, both directly and indirectly. This organic compound contains the energy which the plant obtains from the sun, the same energy that powers animal and human life. Likewise, the oxygen that plant leaves give off is essential to the continuing existence of animals and other aerobic organisms.
An important feature of leaves is the presence of stomata or stomates (sing. stoma). Each stoma consists of a tiny pore surrounded by two specialized, sausage-shaped epidermal cells called guard cells.
These tiny pores open and close to regulate the passage of gases and water to and from the leaves. Stomata are located mostly on the undersides of leaves, but they are also present on the epidermis of other plant organs such as the stems, flowers and fruit. 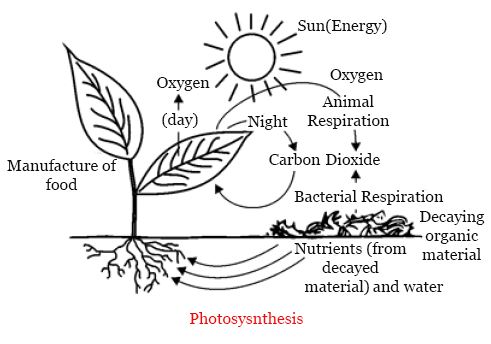 2. Transpiration
Plants lose a large volume of water through the leaves in the form of vapor. The exit of water is through the stomata and the cuticle, but stomatal transpiration is largely more dominant than cuticular transpiration. It is estimated that the loss of water via stomata through the process of transpiration exceeds 90 percent of the water absorbed by the roots. 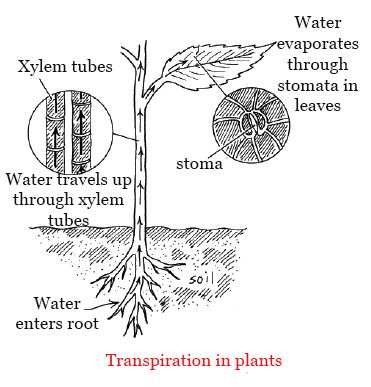 Transpiration may be advantageous to the plant because of its cooling effect resulting from the expenditure of a portion of the plant’s heat energy in converting liquid water to water vapor. There is wide support also that transpiration pull is responsible for the continuous ascent of water and nutrients from the roots to the topmost parts of trees. But this process can be a disadvantage to the plant if transpiration loss exceeds the rate of water absorption through the roots.

3. Floral Induction
The plant leaves synthesize and translocate the flower-inducing hormone called florigen to the buds.

4. Food Storage
The leaves serve as food storage organ of the plant both temporarily and on long-term basis. Under favorable conditions, the rate of photosynthesis may exceed that of translocation of photosynthates toward other organs. During the daytime, sugars accumulate in the leaves and starch is synthesized and stored in the chloroplasts. At nighttime, the starch is hydrolyzed to glucose and respired or converted to transportable forms like sucrose.

5. Special uses
In banana, the leaf sheaths provide the physical support, oftenly called pseudostem, to raise the leaves upward. In a few insect-eating plants such as the pitcher plant, venus fly-trap and sundew, plant leaves are so modified to trap visiting insects, then releasing enzymes and digesting them for their protein which is a source of nutrition. In some plants such as Bryophyllum and Kalanchoe, the leaves are used for asexual reproduction.

ii. Venation
Arrangement pattern of the veins of the leaf is known as venation. The fine lines present on the leaf are called leaf veins. The single middle prominent vein is known as mid rib or the primary vein. The veins other than the primary vein are called secondary veins. The leaf veins consists of vascular bundles that help in the transport of mineral nutrients and water from the roots to the leaf and the materials produced in the leaf to the rest of the plant. The pattern of leaf venation is important characteristic for the identification of plants. The veins are present on either side of the mid rib in different fashion. The secondary vein can create other pattern where they may or may not be parallel to each other. The primary vein can be considered like a tree trunk and the secondary vein as the branches of the tree. These are of two types, they are
a. Reticulate venation
b. Parallel venation
c. Dichotomous venation

It is the most common vein formation in leaves. It can be found in the leaves of maple trees, oak trees and rose bushes. Veins transport food and water from the leaves to the rest of the plant.

The parallel variation features a large primary vein, called a mid rib, running the length of the leaf and smaller secondary veins branching off in a nearly perpendicular fashion running parallel to each other. Much smaller, fine veins run between the parallel veins forming a web of veins to nourish the leaf.

c. Dichotomous venation
This type of venation occurs in Gingko. Numerous veins radiate from the base of the leaf that branch near the upper leaf surface to form a Y.

iii. Leaf modification
As plants colonized a wide variety of environments, from deserts to lakes to tropical rain forests, modifications of plant organs that would adapt the plants to their specific habitats arose. Leaves, in particular, have evolved some remarkable adaptations. A brief discussion of a few of these modifications follows.

a. Floral leaves (Bracts)
Poinsettias and dogwoods have relatively inconspicuous, small, greenish-yellow flowers. However, both plants produce large modified leaves, called bracts. These bracts surround the true flowers and perform the same function as showy petals. It should be noted, however, that bracts can also be quite small and not as conspicuous as those of the examples mentioned. 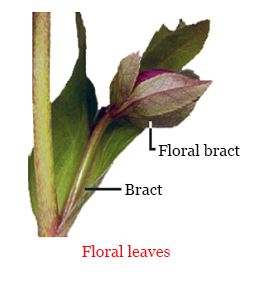 b. Spines
The leaves of many cacti, barberries, and other plants are modified as spines. In the case of cacti, the reduction of leaf surface reduces water loss and also may deter predators. Spines should not be confused with thorns, such as those on honey locust, which are modified stems, or with the prickles on raspberries and rose bushes, which are simply outgrowths from the epidermis or the cortex just beneath it. 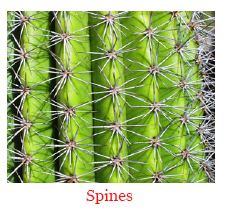 c. Reproductive leaves
Several plants produce tiny but complete plantlets along their margins. Each plantlet, when separated from the leaf, is capable of growing independently into a full-sized plant. The walking fern produces new plantlets at the tips of its fronds. While leaf tissue isolated from many species will regenerate a whole plant, this in vivo regeneration is unique among just a few species. 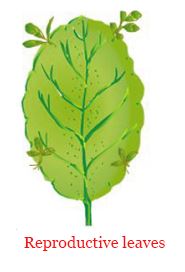 d. Window leaves
Several genera of plants growing in arid regions produce succulent, cone-shaped leaves with transparent tips. The leaves often become mostly buried in sand blown by the wind, but the transparent tips, which have a thick epidermis and cuticle, admit light to the hollow interiors. This allows photosynthesis to take place beneath the surface of the ground. 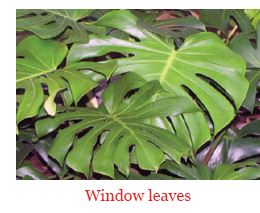 e. Shade leaves
Leaves produced where they receive significant amounts of shade tend to be larger in surface area, but thinner and with less mesophyll than leaves on the same tree receiving more direct light.

This plasticity in development is remarkable, as both types of leaves on the plant have exactly the same genes. Environmental signals can have a major effect on development. 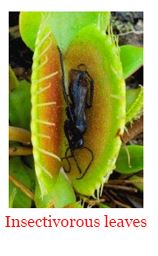 f. Insectivorous leaves
Almost 200 species of flowering plants are known to have leaves that trap insects, with some digesting their soft parts. Plants with insectivorous leaves often grow in acid swamps deficient in needed elements, or containing elements in forms not readily available to the plants; this inhibits the plants’ capacities to maintain metabolic processes sufficient to meet their growth requirements. Their needs are, however, met by the supplementary absorption of nutrients from the animal kingdom.

g. Pitcher plant leaves
Pitcher plants have cone-shaped leaves in which rainwater can accumulate. The insides of the leaves are very smooth, but there are stiff, downward-pointing hairs at the rim. An insect falling into such a leaf finds it very difficult to escape and eventually drowns. The nutrients released when bacteria, and in most species digestive enzymes, decompose the insect bodies are absorbed into the leaf.
Examples: Sarracenia, Darlingtonia, Nepenthes 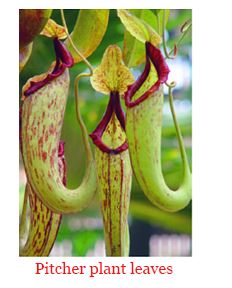 Other plants, such as sundews have glands that secrete sticky mucilage that trap insects, which are then digested by enzymes. The Venus flytrap produces leaves that look hinged at the midrib. When tiny trigger hairs on the leaf blade are stimulated by a moving insect, the two halves of the leaf snap shut, and digestive enzymes break down the soft parts of the trapped insect into nutrients that can be absorbed through the leaf surface. Nitrogen is the most common nutrient needed. Curiously, the Venus flytrap will not survive in a nitrogen-rich environment, perhaps a trade-off made in the intricate evolutionary process that resulted in its ability to capture and digest insects.