Plant cells, like all other living cells, are surrounded by a semi permeable membrane, and any particle moving into or out of the cell must cross this membrane. There are three basic processes by which particles move across plant cell membranes: diffusion, facilitated diffusion, and active transport.
The process of active transport requires the direct input of energy to move particles across the cell membrane. Diffusion and facilitated diffusion can occur without the direct expenditure of cellular energy.
Diffusion is possible in a liquid or gaseous phase are not static, they are in constant motion as a result of kinetic energy, which exists at temperatures above absolute zero (–273.16 degrees Celsius, or –459.69 degrees Fahrenheit).
As the concentration of a substance increases, its free energy also increases. When molecules move, they collide with one another and exchange kinetic energy, and there is a random but progressive movement from regions of high free energy (high concentration) to regions of low free energy (low concentration).

Diffusion is an important process in the lives of plants. Water is an important component of all cells, and water moves into plant cells by the process of osmosis. Osmosis is the diffusion of water across a semi-permeable membrane. Many plant nutrients reach the root surface via diffusion through the soil solution.
Some nutrient molecules diffuse across root cell membranes into the cytosol or from the cytosol of the endodermal cells into the xylemtissue. Carbon dioxide diffuses from the atmosphere through the stomata and into the air spaces of leaves. Water vapor evaporates from the surface of a leaf by diffusion through the open stomata.

Substances with low lipid solubility can move across membranes via facilitated diffusion. In this process, the substance binds to a transporter molecule, generally called an ionophore, which transports the substance across the membrane and down its concentration gradient.

b. Comparison between Osmosis and Diffusion 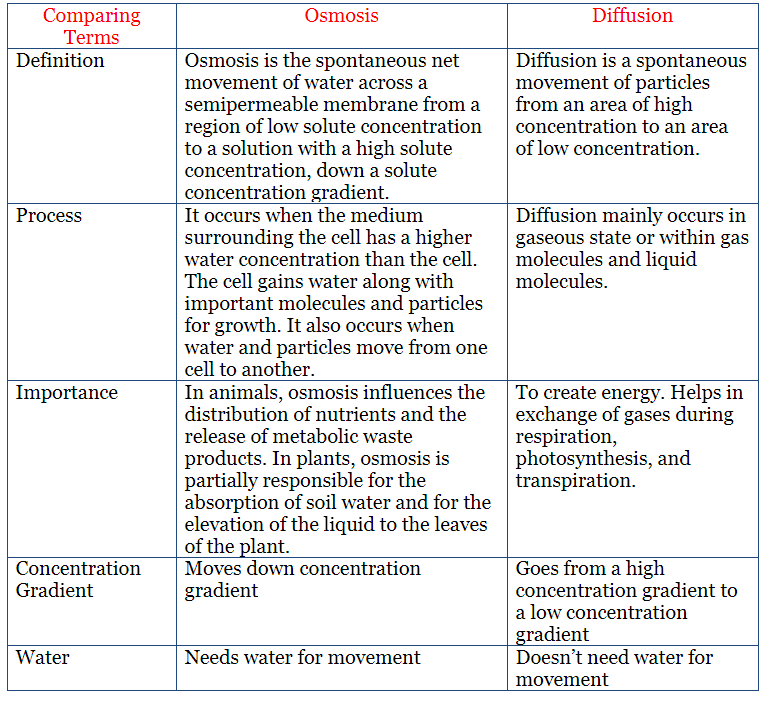