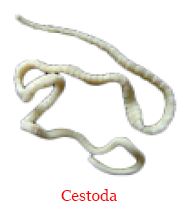 Cestoda is the name given to a class of parasitic flatworms, of the phylum Platyhelminthes. Biologists informally refer to them as cestodes. The best-known species are commonly called tapeworms. All cestodes are parasitic and their life histories vary, but typically they live in the digestive tracts of vertebrates as adults, and often in the bodies of other species of animals as juveniles. Over a thousand species have been described, and all vertebrate species may be parasitised by at least one species of tapeworm.