a. Tape worms:
The small intestinal tapeworms of major importance in sheep are Moniezia expansa, Thysaniezia giardi, and Avitellina centripunctata. Stilesia hepatica parasitizes the bile ducts of sheep and other ruminants.

There are three common species that affect dogs and cats:
i. Dipylidium caninum: Which can infect dogs, cats and people uses the flea larvae as intermediate hosts.
ii. Taenia pisiformis: Which infects dogs uses the rabbit.
iii. Taenia taeniaeformis: Which infects cats uses the rat or mouse.
The other most common tapeworms that infect dogs and cats are: Dipylidium caninum, Taenia species, Echinococcus granulosus and E. multiocularis, Diphyllobothrium latum and Spirometra mansonoides.

b. Nematodes:
There are two types of Roundworm in dogs and cats, Toxocara canis and Toxascaris leonine, which affect the intestines and causes a pot-bellied appearance. Hookworms occur in the intestines and can also be transmitted to humans. Hookworm is a small, thin worm that hooks on to the intestinal wall and sucks the blood from its victim, which causes anaemia and perhaps death. Whipworms are long, thin worms that live in the dog's colon and are not visible by the naked eye. They attach themselves to the intestinal walls, causing intestinal bleeding, anaemia, weight loss, flatulence, diarrhoea with blood or mucus in the stool and lack of energy. 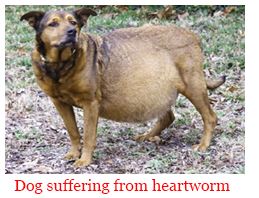 Heartworm is spread by mosquitoes, which become infected from biting dogs that carry the disease. These dog worms destroy the muscle and tissue of the heart, which can cause congestive heart failure and result in death. At this advanced stage, your dog would experience pot-belly, coughing, lack of energy and dull coat. Acute heartworm disease in cats can result in shock, vomiting, diarrhoea, fainting, and sudden death. Chronic infection can cause loss of appetite, weight loss, lethargy, exercise intolerance, coughing, and difficulty breathing.

Heartworms go through several life stages before they become adults infecting the heart of the host animal. The microfilariae circulate in the bloodstream of dog for as long as two years, waiting for the next stage in their life cycle in the gut of a blood sucking mosquito. When ingested by a mosquito, the microfilariae undergo a series of moults to the infective third larval stage and then migrate to the salivary glands of the mosquito, where they wait to infect another host through mosquito bite.

d. Horse Stomach worm:
Stomach Worms larvae are ingested by fly maggots in manure. The worms develop inside the maggots.

Mature flies then deposit the larvae on the lips, nostrils, wounds and other naturally moist areas of the horse, from where they are swallowed as the horse licks the infested area, or they stay in a wound and create oozing, expanding the sores. Larvae deposited in the eyes can cause conjunctivitis. Larvae that are eaten can cause gastritis and tumour-like growths which may rupture.

e. Poultry eye worm:
Oxyspirura mansoni is a widely distributed spiruroid nematode parasite found under the nictitating membrane in the eye of turkeys, chickens, peafowl, quail, and grouse; larvae develop to the infective stage in cockroaches. Eggs pass down tear ducts, are swallowed and pass out in faeces, hatch after ingestion by cockroach. Larvae become infective for final host in 50 days. After ingestion by the final host larvae pass from crop up oesophagus and through tear ducts to eye. Eggs appear in faeces of final host in 32 days.

The former is the most common liver fluke of cattle. It is greyish-brown, leaf-shaped, flatworms with two suckers at the front end. Thriving in the liver of infected cattle, flukes disrupt the normal liver functions such as synthesizing glucose, secreting bile, and synthesizing and storing vitamin A. Eggs from the animal may be deposited in water where they hatch into miracidium. If snails are present, the conversion from miracidium to cercaria to metacercaria may occur inside the body of snail. The cysts are formed on vegetation, from where they are ingested by cattle or sheep. The intestinal wall is penetrated, followed by the migration of the parasite to liver where significant damage is caused.
The damage to the liver by flukes can be extensive and diarrhoea, weight loss, and jaundice can be observed. Each fluke can cause the loss of 0.5 ml of blood per day from the liver. A moderate infestation in cattle of 100-200 flukes can lead to blood loss of up to half a litre each week that can cause severe anaemia.