1. Magnetism:
Magnetism is the property displayed by magnets and produced by the movement of electric charges, which results in objects being attracted. Magnet is a piece of iron or other materials that can attract iron containing objects and that points north and south when suspended.

3. Properties of Magnetism:
A magnet is characterized by the following two properties

i. Attractive Property:
A magnet attracts magnetic substance like iron, cobalt, nickel and some of their alloys like magnetite.
Scientific form of magnetite is (Fe3O4).

ii. Directive Property:
When a magnet is freely suspended, it aligns itself in the geographical north south direction.
* A magnet may be i. Natural ii. Artificial
* Natural magnet is oxide of iron. But due to irregular shape, weak magnetism and high brittleness, natural magnets find no use in the laboratory.
* The magnets made by artificial methods are called artificial magnets or man made magnets. They may be of different types like bar magnet, horse shoe magnet, Robinson’s ball ended magnet, magnetic needle, electromagnet.
* The two points near the two ends of a magnet where the attracting capacity is maximum are called magnetic poles. When a magnet is freely suspended, its one pole always directs towards the north. This pole is called south pole.
* The imaginary line joining the two poles of a magnet is called magnetic axis of the magnet.
* Similar poles repel each other and dissimilar poles attract each other.
* When a magnetic substance is placed rear a magnet, it gets magnetized due to induction. 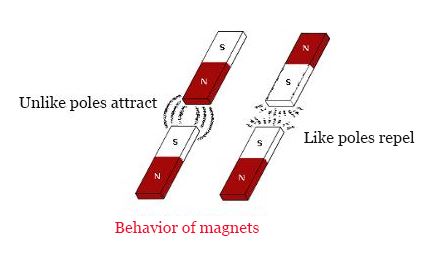 III. Ferro magnetism:
Ferromagnetic substances are those substance, which when placed in a magnetic field, are strongly magnetized in the direction of field.
Ex: Iron, Cobalt, Nickel…….etc.
Ferro magnetism is a body as iron that below a certain temperature, the Curie point, can possess magnetization in the absence of an external magnetic field; noting or pertaining to a substance in which the magnetic moments of the atoms are aligned.
A ferromagnet, like a paramagnetic substance, has unpaired electrons. However, in addition to the electrons' intrinsic magnetic moment's tendency to be parallel to an applied field, there is also in these materials a tendency for these magnetic moments to orient parallel to each other to maintain a lowered-energy state. Thus, even in the absence of an applied field, the magnetic moments of the electrons in the material spontaneously line up parallel to one another.
Every ferromagnetic substance has its own individual temperature, called the Curie temperature, or Curie point, above which it loses its ferromagnetic properties. This is because the thermal tendency to disorder overwhelms the energy-lowering due to ferromagnetic order.
Ferromagnetism only occurs in a few substances; the common ones are iron, nickel, cobalt, their alloys, and some alloys of rare earth metals.
Atoms of Ferromagnetic substance have a permanent dipole moment i.e. they behave like a very small magnet. The atoms form a large no. of effective regions called domain in which 1018 to 1021 atoms have their dipole moment aligned in the same direction. The magnetism in ferromagnetic substance, when placed in a magnetic field, is developed due to these domain by
a) To displacements of boundaries of the domains
b) The rotation of the domains.

IV. Ferrimagnetism:
Like ferromagnetism, ferrimagnets retain their magnetization in the absence of a field. However, like antiferromagnets, neighboring pairs of electron spins like to point in opposite directions. These two properties are not contradictory, because in the optimal geometrical arrangement, there is more magnetic moment from the sublattice of electrons that point in one direction, than from the sublattice that point in the opposite direction.
Most ferrites are ferrimagnetic. The first discovered magnetic substance, magnetite, is a ferrite and was originally believed to be a ferromagnet; Louis Neel disproved this, however, after discovering ferrimagnetism.

6. Magnetic Field:
Region in space around a magnet where the magnet has its magnetic effect is called magnetic field of the magnet.
Magnetic fields, like gravitational fields, cannot be seen or touched. We can feel the pull of the Earth’s gravitational field on ourselves and the objects around us, but we do not experience magnetic fields in such a direct way. We know of the existence of magnetic fields by their effect on objects such as magnetized pieces of metal, naturally magnetic rocks such as lodestone, or temporary magnets such as copper coils that carry an electrical current. If we place a magnetized needle on a cork in a bucket of water, it will slowly align itself with the local magnetic field. Turning on the current in a copper wire can make a nearby compass needle jump. Observations like these led to the development of the concept of magnetic fields.

8. Magnetic Moment:
Magnetic Moment is defined as “The product of the pole strength and the distance between the poles.”
The SI unit of magnetic moment is “Torque”.
Torque = N.m/T
= A.m2
= J/T
Where A= ampere
J = Joules
T = Tesla. 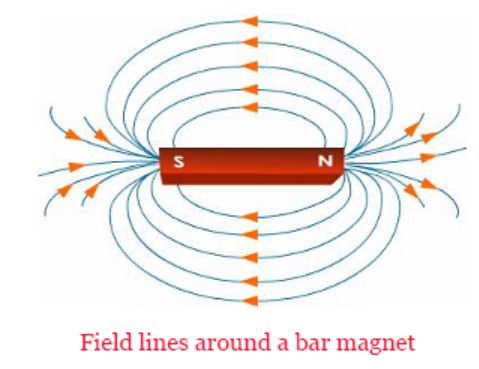 12. Terrestrial Magnetism:
Our earth behaves as a powerful magnet whose south pole is near the geographical North pole and whose north pole is near the geographical south pole. The magnetic field of earth of a place is described in the terms of following three elements.
Declination: The acute angle between magnetic meridian and geographical meridian at a place is called the angle of declination at that place.
Dip or Inclination: Dip is the angle which the resultant earth’s magnetic field at a place makes with the horizontal. At poles and equator, dip is 90° and 0° respectively.
Horizontal component of earth’s magnetic field: At a place it is defined as the component of earth’s magnetic field along the horizontal in the magnetic meridian.
Its value is different at places. Approximately its value is o.4 gauss or 0.4 × 10-4 tesla.

13. Magnetization:
Magnetization is a process of making a substance temporarily or permanently magnetic, as by insertion in magnetic field.
Permanent Magnets and Electro Magnets:
Substances which at room temperature retain their ferromagnetic property for a long period of time are called permanent magnets. Permanent magnets can be made in a veriety of ways. One can hold an iron rod in the north-south direction and hammer it repeatedly.
An efficient way to make a permanent magnet is to place a ferromagnetic rod in solenoid and pass a current. The magnetic field of the solenoid magnetises the rod.