i. External fertilization in animals
External fertilization is a strategy of fertilization in which a sperm cell unites with an egg cell in the open, rather than inside specialized organs within the bodies of the parents. In sexual reproduction, there must be some way of getting the sperm to the egg. Since the morphology of sperm in most species is adapted to mobility in suitably watery liquids, the sperms of aquatic animals take advantage of the water in which they live, and reach the egg by swimming. Typically such sperms have one or more flagella and in some species they are streamlined. 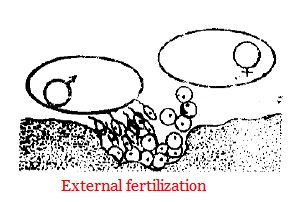 In many aquatic animals such as coral and hydra, eggs and sperm are simultaneously shed into the water, and the sperm swim through the water to fertilize the egg in a process known as broadcast fertilization. External fertilization demands relatively large numbers of sperm cells, typically millions to billions per male, because there is no high concentration of the eggs and sperms in a particularly limited space.

Once an egg is fertilized by a sperm, the fertilized egg is called a zygote. Following the first division into two cells continuing to approximately 8 weeks of development in it is called an embryo. The embryo must, at some point in its development leave the female’s body. There are three different strategies for this, they are
a. Oviparity
b. Ovoviviparity
c. Viviparity

a. Oviparity
A strategy in which the fertilized egg moves outside the body and most embryonic development continues there. The embryos are nourished by nutrients contained in the egg’s yolk, and live offspring emerge or hatch from the egg. This developmental strategy is most familiar to us among birds, but it also occurs among most fishes, amphibians, reptiles, insects and spiders.

b. Ovoviviparity
A less common strategy, in which most embryonic development takes place inside an egg, with the embryo nourished by the egg’s yolk, but the egg itself remains in the female’s body until it hatches. This strategy is used by many aquatic organisms, including sharks and some other fishes, and some species of amphibians, reptiles and invertebrates.

c. Viviparity
A strategy in which the embryo develops inside the mother, nourished by nutrients carried in her blood, and live offspring are born. This strategy is perhaps most familiar to us because it is used by humans and nearly all other mammals, but it is also occurs among some reptiles, amphibians and fishes.
Copulation, which involves the insertion of the penis or other intromittent organ into the vagina or to the cloaca in monotremes, most reptiles, some birds, the amphibian tailed frog and some fish, the disappeared dinosaurs, as well as in other non-vertebrate animals.