A fruit is a propagative unit developing from one or more fertilized egg cells enclosed by integuments and attached to megasporophylls, or a megasporophyll-scale complex, in a strobilus, cone, gynoecium, concrescent gynoecia, or gynoecia that disseminate together at the time it or its seed(s) are dispersed from the plant, or just prior to germination on the plant, and it may also include any other attached scales, bracts, modified branches, perianth, or inflorescence parts.
The process of fertilization initiates both seed and fruit development. While seeds are developing in the ovules, the ovary tissue undergoes a series of changes resulting in the development of the fruit. These are of four types, they are
i. Simple fruits
ii. Aggregate fruits
iii. Multiple fruits
iv. Accessory fruits

i. Simple fruits
Simple fruits can be either dry or fleshy, and result from the ripening of a simple or compound ovary in a flower with only one pistil. Dry fruits may be either dehiscent or indehiscent.

ii. Aggregate fruits
An aggregate fruit or etaerio is a fruit that develops from the merger of several ovaries that were separate in a single flower. Not all flowers with multiple ovaries form aggregate fruit; the ovaries of some flowers do not become tightly joined together to make a larger fruit. Aggregate fruits may also be accessory fruits, in which parts of the flower other than the ovary become fleshy and form part of the fruit. 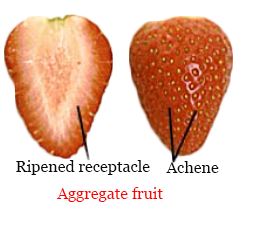 iii. Multiple fruits
Multiple fruits, also called collective fruits, are fruiting bodies formed from a cluster of fruiting flowers, the inflorescence. Each flower in the inflorescence produces a fruit, but these mature into a single mass in which each flower has produced a true fruit. After flowering the mass is called an infructescence . Examples are the fig, pineapple, mulberry, osage-orange, and breadfruit. 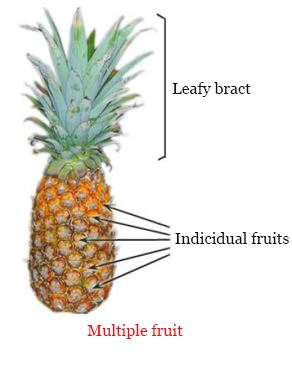 iv. Accessory fruits
An accessory fruit (sometimes called false fruit, spurious fruit, pseudofruit, or pseudocarp) is a fruit in which some of the flesh is derived not from the ovary but from some adjacent tissue exterior to the carpel. Examples of accessory tissue are the receptacle of the strawberry, pineapple, common fig, or mulberry, and the calyx of Gaultheria procumbens or Syzygium jambos.