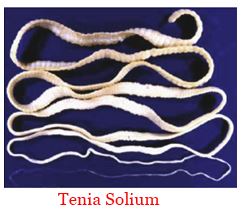 Transmission:
Taeniasis is contracted after eating undercooked or raw pork and beef that contain the larvae. Cysticercosis occurs after ingestion of contaminated food, water, or soil that contain T. solium eggs. Infection is acquired by eating undercooked beef and pork that contain the fluid-filled cysticerci of the tapeworms. The adult worms live in the lumen of the intestine where they cause the symptoms. They acquire nutrients from the intestine, leading to malnutrition of the host. The gravid proglottids, body segments containing fertilised eggs, are released in the faeces of the host.
Then they are consumed by an intermediate host such as a cow or pig, where they hatch within the duodenum to become larvae, penetrate through the intestinal wall into nearby blood vessels, and enter the bloodstream. Once they reach organs such as the skeletal muscles, liver or lungs, the larvae then develop into a cyst, which then becomes a fluid-filled cysticercus. These contaminated tissues are then consumed through raw or undercooked meat.

Moreover, a high level of sanitation and prevention of human faecal contamination of pig feeds also plays a major role in prevention. Infection can be prevented with proper disposal of human faeces around pigs, cooking meat thoroughly and/or freezing the meat at −10oC for 5 days. For human cysticercosis, dirty hands are attributed to be the primary cause, and especially common among food handlers. 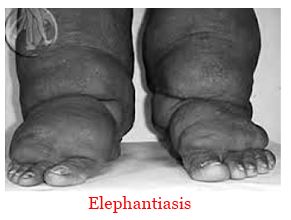 Filariasis is a mosquito-transmitted parasitic roundworm infection transmitted through the bite of mosquitoes. It is found in tropical area of Africa, Asia, and Central and South America, and in the Pacific. Once inside a host, the third stage larvae migrate through the lymphatic channels and become trapped in lymph nodes and tissues. There is a range of possible manifestations of the infection, depending on which filarial parasite species has caused the infection.

Filariasis can also affect domesticated animals, such as cattle, sheep, and dogs.

Symptoms:
The most spectacular symptom of lymphatic filariasis is elephantiasis edema with thickening of the skin and underlying tissues which was the first disease discovered to be transmitted by mosquito bites. Elephantiasis results when the parasites lodge in the lymphatic system. These include fever, pain and swelling of the lymph glands, inflammation of lymph drainage areas, swelling of the scrotum, skin rashes and blindness. Progression of the disease often causes grotesque enlargement of the legs known as elephantiasis.

Treatment:
Treatment is available to eliminate the parasites from the body, but some of the damage they cause may not be reversible. Medical advice should be obtained promptly if the infection is suspected. Prevention of insect bites is the first line of defense.

c. Ascariasis: Ascaris
Ascariasis is a disease caused by the parasitic roundworm Ascaris lumbricoides. Infections have no symptoms in more than 85% of cases, especially if the number of worms is small. 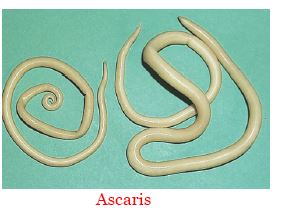 Symptoms increase with the number of worms present and may include shortness of breath and fever in the beginning of the disease. These may be followed by symptoms of abdominal swelling, abdominal pain and diarrhea. Children are most commonly affected, and in this age group the infection may also cause poor weight gain, malnutrition and learning problems.

Causes:
Infection occurs by eating food or drink contaminated with Ascaris eggs from feces. The eggs hatch in the intestines, burrow through the gut wall, and migrate to the lungs via the blood.

There they break into the alveoli and pass up the trachea, where they are coughed up and swallowed. The larvae then pass through the stomach for a second time into the intestine where they become adult worms. Ascariasis is classified as a neglected tropical disease as it is a type of soil-transmitted helminthiasis. These diseases are in turn part of a group of diseases called helminthiasis.

Prevention:
Prevention is by improved access to sanitation which includes the use of properly functioning and clean toilets by all community members as one important aspect. Handwashing with soap may be protective; however, there is no evidence it affects the severity of disease. Eliminating the use of untreated human faeces as fertilizer is also important.