The dominance of the Indian National Congress was broken for the first time in 1977, with the defeat of the party led by Indira Gandhi, by an unlikely coalition of all the major other parties, which protested against the imposition of a controversial emergency from 1975–1977. A similar coalition, led by VP Singh was swept to power in 1989 in the wake of major allegations of corruption against the incumbent Prime Minister, Rajiv Gandhi. It, too, lost its steam in 1990.
In 1992, the heretofore one-party-dominant politics in India gave way to a coalition system wherein no single party can expect to achieve a majority in the Parliament to form a government, but rather has to depend on a process of coalition building with other parties to form a block and claim a majority to be invited to form the government. This has been a consequence of strong regional parties which ride on the back of regional aspirations.

While parties like the TDP and the DMK had traditionally been strong regional contenders, the 1990s saw the emergence of other regional players such as the Lok Dal, Samajwadi Party, Bahujan Samaj Party and the Janata Dal. These parties are traditionally based on regional aspirations, e.g. Telangana Rashtra Samithi or are strongly influenced by caste considerations, e.g. Bahujan Samaj Party which claims to represent the Dalits.
Presently, the outgoing United Progressive Alliance led by the Congress Party is in power and parliament is in process of dissolution post Indian general election, 2014, while the National Democratic Alliance the prime opposition is set to form the Government.
In recent polls of 2014 Bharatiya Janata Party has achieved the simple majority on its own with securing 282 seats and their alliance NDA has secured 335 seats. Narendra Modi widely recognized as a strong leader with economic developmental focus is now the prime minister.
Votes between two major alliances since Independence: 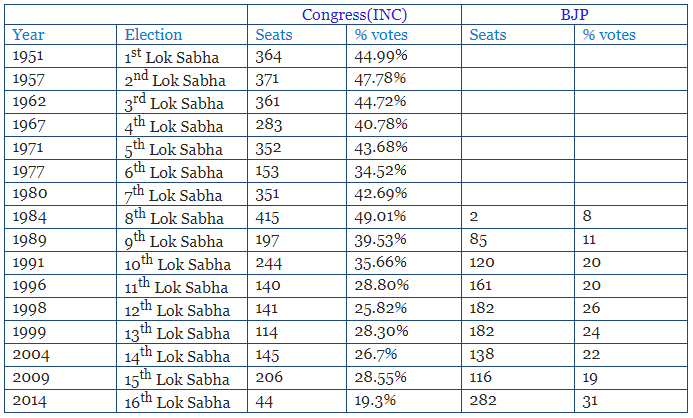