The skin is the outer layer of vertebrate animals. Its major functions are protection, temperature regulation and to act as a sense organ. 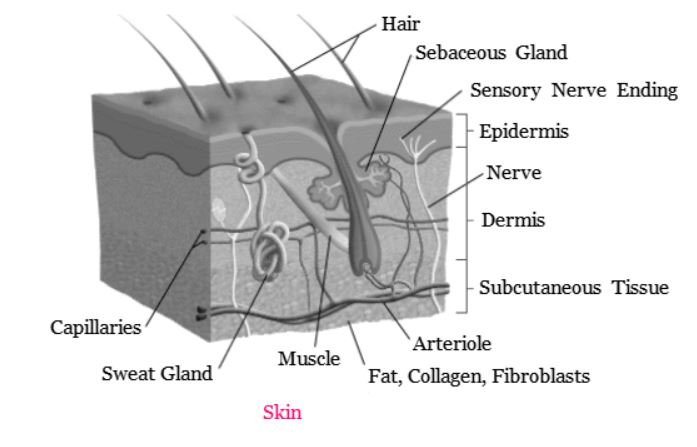 Two major layers of the skin:
a. Epidermis:
The epidermis is the outer renewable layer of the skin. As it wears away at the surface it grows at the base.
Malphian Layer: This is the base layer, which is constantly producing new cells by mitosis. The new cells are pushed towards the surface. The dark pigment melanin is produced here.
Granular Layer: The protein keratin accumulates in the cells giving them a granular appearance. The cells finally die.
Cornified Layer: This is the surface layer of dead keratinised cells, which is constantly being eroded.
b. Dermis:
The dermis is the inner layer of the skin, above it is the epidermis and below it is adipose tissue.
Many different structures are present in the dermis - hair follicles, sebaceous glands, sweat glands, blood vessels, sensory nerve endings all of which are embedded in a dense matrix of connective tissue.

Functions of the Skin and Related Structures:
Protection:
* Prevent excessive loss of water - the cornified layer of the epidermis is waterproof.
* Prevents the entry of pathogens the cornfield layer is made of dead cells.
* Sebum from the sebaceous glands contains anti-microbial chemicals.
* ‘Sebum oil’ keeps the skin intact preventing it from ‘cracking’.
* Melanin gives protection against the damaging UV rays of sunlight.
* The dermis and adipose tissue protect against mechanical injury.
Temperature Regulation - Maintains blood at 37oC
Threat of Temperature Rise - Increases heat loss.
* Sweat glands secrete water onto the skin surface. Evaporation of water removes heat from the body.
* Arterioles dilate increasing blood flow through the capillaries close to the skin’s surface.
* The hair erector muscles relax, the hair lies flatter reducing the depth of insulation.

Sense Organ:
The skin contains receptors for touch, pressure, pain, temperature rise and temperature decrease. The skin supplies information about a variety of external environment conditions.
Vitamin D Production: When ultraviolet light penetrates the skin converting a chemical in the blood to vitamin D. As a result vitamin D is often called the ‘sunshine vitamin’.
Excretion: The skin has about 2.5 million sweat glands. Sweat is a dilute solution of water, sodium chloride, urea, ammonia, uric acid and lactic acid. Urea, ammonia and uric acid are nitrogenous wastes.
Energy Storage: There is a layer of fat storage adipose tissue below the dermis of the skin. Fat is also a poor conductor of heat and so the skin acts as a heat insulator. This fat layer also acts as a shock absorber protecting against mechanical damage.
Homeostatic Organ:
Many of the functions of the skin play an important role in maintaining the internal environment of the body in a constant suitable condition for efficient metabolism temperature control, protection against pathogens, vitamin D formation, excretion and role in response to changes in environmental conditions.