A stem is one of two main structural axes of a vascular plant, the other being the root. The stem is normally divided into nodes and internodes: 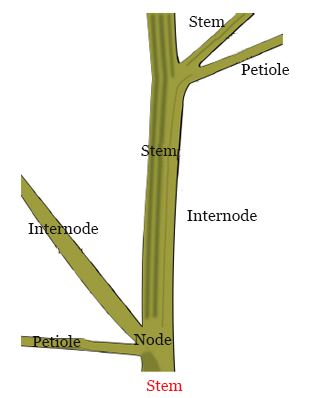 Key points
* The nodes hold one or more leaves, as well as buds which can grow into branches (with leaves, conifer cones, or inflorescences (flowers)). Adventitious roots may also be produced from the node.
* The internodes distance one node from another.
* Shoots generally refers to new fresh plant growth including both stems and other structure like leaves or flowers.
* In most plants stems are located above the soil surface but some plants have underground stems.
* These stems have four main functions which are...
* Support for and the elevation of leaves, flowers and fruits. The stems keep the leaves in the light and provide a place for the plant to keep its flowers and fruits.
* Transport of fluids between the roots and the shoots in the xylem and phloem.
* Storage of nutrients.
* Production of new living tissue. The normal life span of plant cells is one to three years. Stems have cells called meristems that annually generate new living tissue.

i. Underground stem modifications
The underground stems, by being situated below the surface of the soil, protect themselves against unfavourable conditions of weather and the attack of animals, and serve as store houses for reserve food, and in vegetative propagation. Their stem nature can be distinguished by the presence of nodes and internodes, scale leaves at the nodes, axillary buds in axils of scale leaves and a terminal bud. Further, the anatomy of the underground stem resembles that of an aerial stem. 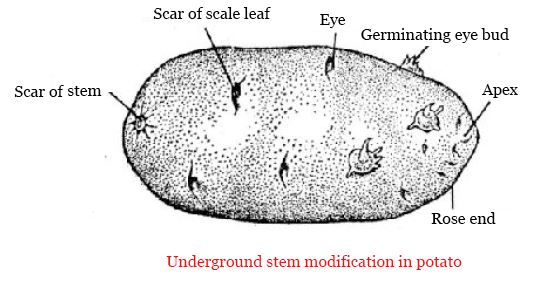 The underground stems are of four types, they are...
a. Rhizome
b. Corm
c. Stem tuber
d. Bulb

a. Rhizome
A rhizome is a modified subterranean stem of a plant that is usually found underground, often sending out roots and shoots from its nodes. Rhizomes are also called creeping rootstalks and rootstocks. Rhizomes develop from axillary buds and are diageotropic or grow perpendicular to the force of gravity. The rhizome also retains the ability to allow new shoots to grow upwards.
If a rhizome is separated into pieces, each piece may be able to give rise to a new plant. The plant uses the rhizome to store starches, proteins, and other nutrients. These nutrients become useful for the plant when new shoots must be formed or when the plant dies back for the winter. This is a process known as vegetative reproduction and is used by farmers and gardeners to propagate certain plants. 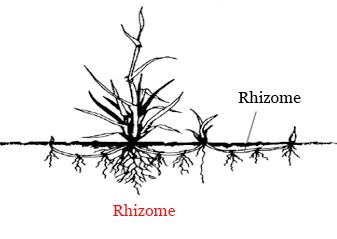 b. Corm
A corm, bulbo-tuber, or bulbotuber is a short, vertical, swollen underground plant stem that serves as a storage organ used by some plants to survive winter or other adverse conditions such as summer drought and heat.

Key points
* A corm consists of one or more internodes with at least one growing point, generally with protective leaves modified into skins or tunics.

* The tunic of a corm is formed from dead petiole sheaths, remnants of leaves produced in previous years.
* They act as a covering, protecting the corm from insects, digging animals, flooding, and water loss.
* The tunics of some species are thin, dry, and papery, at least in young plants, however, in some families, such as Iridaceae, the tunic of a mature corm can be formidable protection.

c. Stem tuber
Tubers are various types of modified plant structures that are enlarged to store nutrients. They are used by plants to survive the winter or dry months, to provide energy and nutrients for regrowth during the next growing season, and as a means of asexual reproduction. 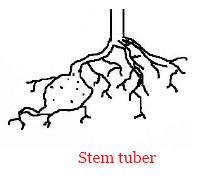 Stem tubers generally start off as enlargements of the hypocotyl section of a seedling but also sometimes include the first node or two of the epicotyl and the upper section of the root. The stem tuber has a vertical orientation with one or a few vegetative buds on the top and fibrous roots produced on the bottom from a basal section, typically the stem tuber has an oblong rounded shape.