Reproduction or procreation is the biological process by which new individual organisms (offspring) are produced from their parents. 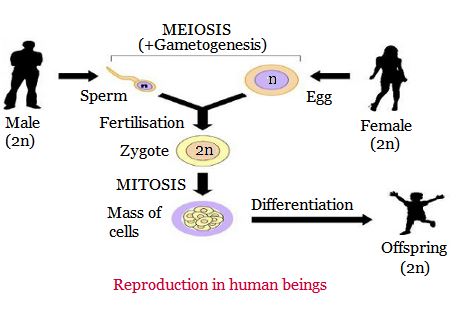 Key points
* This is a fundamental feature of all known life.
* Each individual organism in the universe exists as the result of reproduction.

Key points
* In this reproduction, it requires the sexual interaction of two organisms or gametes of the same species.
* One from each sex to produce offspring organisms, whose genetic characteristics are derived from those of the parent organisms.

a. Meiosis process
Meiosis is a specialized type of cell division which reduces the chromosome number by half. This process occurs in all sexually reproducing eukaryotes including animals, plants and fungi.

Key points
* In meiosis, DNA replication is followed by two rounds of cell division to produce four daughter cells with half the number of chromosomes as the original parent cell.
* The two meiotic divisions are known as meiosis - I and meiosis - II.
* Before meiosis begins, during S phase of the cell cycle, the DNA of each chromosome is replicated so that it consists of two identical sister chromatids attached at a centromere.
* In meiosis - I, homologous chromosomes pair with each other and can exchange genetic material in a process called chromosomal crossover.
* The homologous chromosomes are then pulled apart into two new separate daughter cells, each containing half the number of chromosomes as the parent cell.
* At the end of meiosis - I, sister chromatids remain attached and may differ from one another if crossing-over occurred. In meiosis - II, the two cells produced during meiosis - I divide again.
* During this division, sister chromatids detach from one another and are separated into four total daughter cells. These cells can mature into gametes, spores, pollen, and other reproductive cells.
* A typical diploid human cell contains 23 pairs of chromosomes.

b. Fertilization
Fertilisation or fertilization (also known as conception, fecundation and syngamy) is the fusion of gametes to initiate the development of a new individual organism.

Key points
* The gametes that participate in fertilization of plants are the sperm (male), and the egg cell, and in flowering plants a second fertilization event involves another sperm cell and the central cell which is a second female gamete.
* In flowering plants there are two sperm from each pollen grain.
* In seed plants, after pollination, a pollen grain germinates, and a pollen tube grows and penetrates the ovule through a tiny pore called a micropyle. The sperm are transferred from the pollen through the pollen tube.

Key points
* In this reproduction an organism can reproduce without the involvement of another organism.
* It is not limited to single celled organisms.
* The cloning of an organism is a form of asexual reproduction.
These are of five types, they are
1. Fission
2. Budding
3. Regeneration
4. Vegetative reproduction
5. Cloning