Cloning is the process of producing similar populations of genetically identical individuals that occurs in nature when organisms such as bacteria, 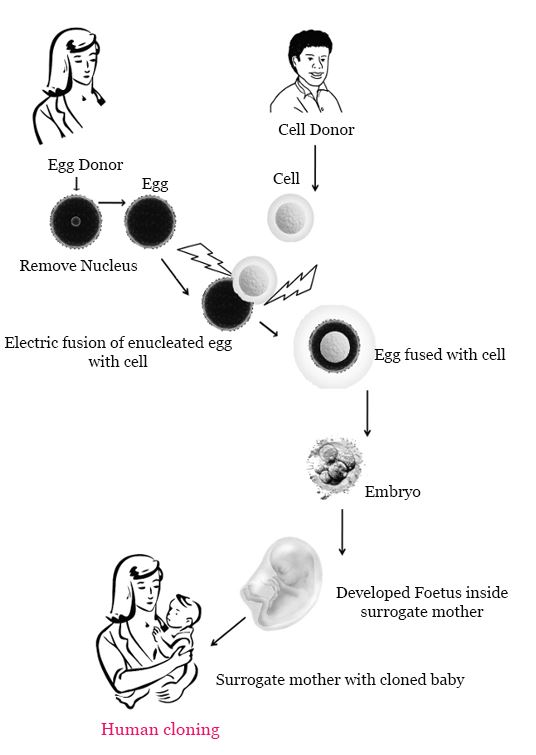 This is three types, they are
1. Molecular cloning
2. Cell cloning
3. Organism cloning

1. Molecular cloning
Molecular cloning refers to the process by which recombinant DNA molecules are produced and transformed into a host organism, where they are replicated. A molecular cloning reaction is usually comprised of two components.
Cloning of any DNA fragment essentially involves four steps-

i. Fragmentation: Breaking apart a strand of DNA

ii. Legation: Gluing together pieces of DNA in a desired sequence

iv. Screening or selection: Selecting out the cells that were successfully transfected with the new DNA
DNA of interest, such as a gene, regulatory element, operon, etc., is prepared for cloning by either excising it out of the source DNA using restriction enzymes, copying it using PCR, or assembling it from individual oligonucleotides. At the same time, a plasmid vector is prepared in a linear form using restriction enzymes or Polymerase Chain Reaction. 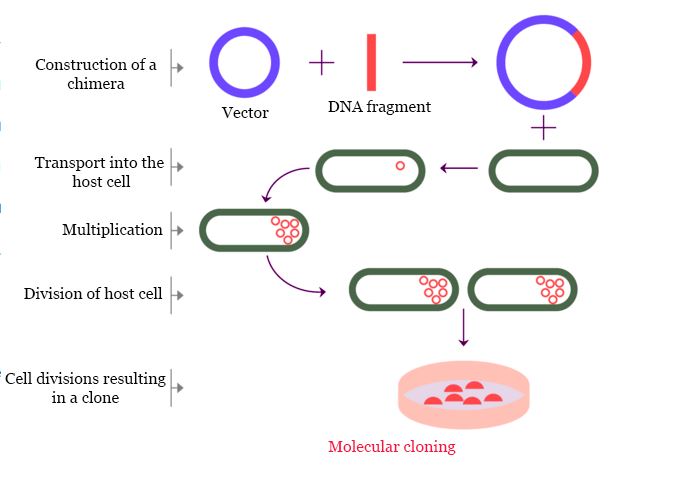 The plasmid is a small, circular piece of DNA that is replicated within the host and exists separately from the host’s chromosomal or genomic DNA. By physically joining the DNA of interest to the plasmid vector through phosphodiester bonds, the DNA of interest becomes part of the new recombinant plasmid and is replicated by the host. Plasmid vectors allow the DNA of interest to be copied easily in large amounts, and often provide the necessary control elements to be used to direct transcription and translation of the cloned DNA. As such, they have become the workhorse for many molecular methods such as protein expression, gene expression studies, and functional analysis of biomolecules.

2. Cell cloning
A clone is a group of identical cells that share a common ancestry, meaning they are derived from the same cell. Clonality implies the state of a cell or a substance being derived from one source or the other.
This is two types, they are-
i. Cloning unicellular organisms
ii. Cloning stem cells

i. Cloning unicellular organisms
Cloning a cell means to derive a population of cells from a single cell. In the case of unicellular organisms such as bacteria and yeast, this process is remarkably simple and essentially only requires the inoculation of the appropriate medium.
Process of Unicellular organisms cloning
A useful tissue culture technique used to clone distinct lineages of cell lines involves the use of cloning rings. According to this technique, a single-cell suspension of cells that have been exposed to a mutagenic agent or drug used to drive selection is plated at high dilution to create isolated colonies, each arising from a single and potentially clonal distinct cell. At an early growth stage when colonies consist of only a few cells, sterile polystyrene rings, which have been dipped in grease, are placed over an individual colony and a small amount of trypsin is added. Cloned cells are collected from inside the ring and transferred to a new vessel for further growth.

ii. Cloning stem cells
Somatic-cell nuclear transfer, known as SCNT, can also be used to create embryos for research or therapeutic purposes. The most likely purpose for this is to produce embryos for use in stem cell research. This process is also called "research cloning" or "therapeutic cloning." 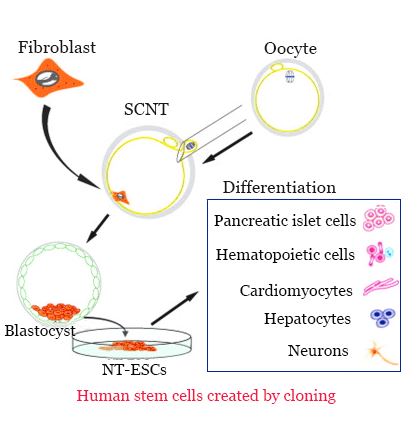 The goal is not to create cloned human beings, but rather to harvest stem cells that can be used to study human development and to potentially treat disease. While a clonal human blastocyst has been created, stem cell lines are yet to be isolated from a clonal source.

The reason why SCNT is used for cloning is because somatic cells can be easily acquired and cultured in the lab. This process can either add or delete specific genomes of farm animals. A key point to remember is that cloning is achieved when the oocyte maintains its normal functions and instead of using sperm and egg genomes to replicate, the oocyte is inserted into the donor’s somatic cell nucleus. The oocyte will react on the somatic cell nucleus, the same way it would on sperm cells.

3. Organism cloning
Organism cloning or reproductive cloning refers to the procedure of creating a new multicellular organism, genetically identical to another. In essence this form of cloning is an asexual method of reproduction, where fertilization or inter-gamete contact does not take place. Asexual reproduction is a naturally occurring phenomenon in many species, including most plants and some insects.
Scientists have made some major achievements with cloning, including the asexual reproduction of sheep and cows. There is a lot of ethical debate over whether or not cloning should be used. However, cloning, or asexual propagation, has been common practice in the horticultural world for hundreds of years.

Organism cloning is two types, they are-
i. Horticultural
ii. Parthenogenesis

i. Horticultural
The term clone is used in horticulture to refer to descendants of a single plant which were produced by vegetative reproduction or apomixis. Many horticultural plant cultivars are clones, having been derived from a single individual, multiplied by some process other than sexual reproduction.

Many trees, shrubs, vines, ferns and other herbaceous perennials form clonal colonies naturally. Parts of an individual plant may become detached by fragmentation and grow on to become separate clonal individuals. A common example is in the vegetative reproduction of moss and liverwort gametophyte clones by means of gemmae. Some vascular plants e.g. dandelion and certain viviparous grasses also form seeds asexually, termed apomixis, resulting in clonal populations of genetically identical individuals.

ii. Parthenogenesis
This is an asexual form of reproduction that is only found in females of some insects, crustaceans, nematodes, fish, the Komodo dragon and lizards. The growth and development occurs without fertilization by a male. In plants, parthenogenesis means the development of an embryo from an unfertilized egg cell, and is a component process of apomixis. In species that use the XY sex-determination system, the offspring will always be female.
An example is the "Little Fire Ant" which is native to Central and South America but has spread throughout many tropical environments.