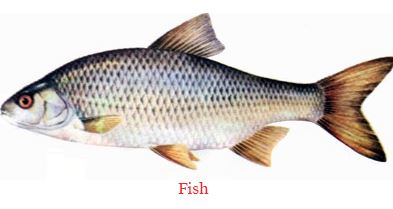 Almost three-fourths of the world's surface is covered in water. This water is home to over 20,000 different species of fish. The earliest fossils of fish date back over 400 million years. There are a wide variety of fish from the goby which is less than one half an inch long, to the whale shark which can be over 60 feet long. Most fish breathe through gills. Gills perform the gas exchange between the water and the fish's blood. They allow the fish to breathe oxygen in the water. Fishes are vertebrates that have a skeleton made of either bone or cartilage. About 95% of fishes have skeletons made of bone. These bony fishes have a swim bladder, a gas-filled sac, that they can inflate or deflate allowing them to float in the water even when not swimming. Fishes with a cartilage skeleton tend to be heavier than water and sink. They must swim to keep afloat. Cartilaginous (cartilage) fish include the ray and the shark.
Most fish swim using a tail fin. Muscles in the tail fin move it from side to side, forcing water backward, and propeling the fish forward. Other fins help the fish change direction and stop. Pectoral fins on their side help them swim up and down. Dorsal and anal fins on the top and bottom keep the fish upright. Pelvic fins on the underside help steer left and right. Many fish eat plants, while others such as the shark, eat other fish. 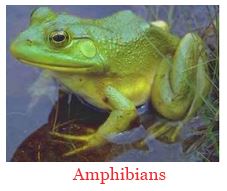 Amphibians lay their eggs in water, and young amphibians tend to resemble small fish. The tadpole, or newborn frog, is born and lives in water. It has a tail that allows it  to swim like a fish. It also has gills so that it can breathe under water. As the tadpole grow into a frog, it loses its gills and tail, and develops legs for moving on land. Most amphibians can both walk and swim in water. Depending on the species of amphibian, breathing can take place in gills, lungs, the lining of the mouth, the skin, or some combination of these. Amphibians body temperature changes with its environment. In cold climates, amphibians hibernate during the winter.

iii. Reptiles:
Reptiles have been around for 300 million years, even during the dinosaur age. The most common reptiles include alligators, crocodiles, lizards, snakes, tortoises and turtles. Reptiles are air-breathing animals, although many live not only on land but in water. The most noticeable feature of reptiles are the scales that cover their body. The majority of reptiles lay eggs to give birth to their young.

Although reptiles breathe through lungs, some reptiles can also absorb oxygen in water through membranes in their mouth. Reptiles are often called cold-blooded because they can't regulate their own body temperature. Their body temperature depends on the external temperature. They will lay in the sun to heat their body, or hide in the ground, under a rock or in water to cool their body.
Crocodiles and alligators are large reptiles that spend much of their time on land and in water. They can walk on land using their webbed feet. They can also use their long tail to swim in water. Crocodiles feed on large animals they catch on land or in water. They have powerful jaws and teeth to tear apart their prey.

Lizards and snakes are the largest group of reptiles. Lizards are four legged animals with a long tail. Many lizards can shed their tail to escape from predators. They can then grow a new tail. Some lizards, such as the chameleon, can change colors to blend into their environment. This camouflage helps to protect them from predators.
Snakes don't have limbs. They move by slithering along the ground. Some snakes are poisonous, or venomous, such as the rattle snake, cobra, and eastern green mamba. They have fangs which bite into their prey and inject poison into the victim. Other snakes, such as the boa constrictor and the python kill their prey by crushing it. Most snakes can dislocate their jaw, allowing them to swallow prey much larger than themselves.

iv. Birds:
There are over 8,000 species of birds. Birds have 3 major differentiating characteristics: wings for flight, feathers, and a beak rather than teeth. Birds have adapted their vertebrate skeleton for flight. Their bones and skull are very thin, making their bodies extremely light.

To support flight also required other changes to their skeleton. Obvious changes are the addition of wings. Other changes are less obvious. The claws and muscles of a bird's foot are designed to lock and hold onto a perch even while the bird is sleeping. A bird's respiratory system is also adapted to make it easier to breathe at high elevations, where air is thinner.

v. Mammals:
Mammals have several unique characteristics that differentiate them from other animals. Most mammals have hair, or fur, covering their body. They are also capable of regulating their body temperature. The mammals metabolism controls heat production, and the sweat glands help cool the body. These allow the mammal to maintain a 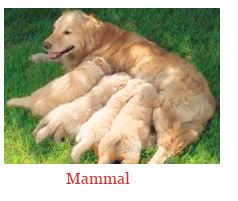 constant body temperature, regardless of the environmental temperature. One other difference is that mammals give birth to fully formed babies, and the female mammals produce milk to feed their young. Most mammals walk on 4 legs, with only the humans walking upright on 2 legs. Aquatic mammals have flippers, or fins, for swimming rather than legs. Common mammals include: primates, such humans and monkeys; marsupials; rodents; whales; dolphins; and, seals.