Plants have different root structures for specific purposes. There are many different types of specialized roots, but two of the more familiar types of roots include aerial roots and storage roots. Aerial roots grow above the ground, typically providing structural support. Storage roots are modified for food storage.

Key points
* Aerial roots are found in many different kinds of plants, offering varying functions depending on the location of the plant.
* Epiphytic roots are a type of aerial root that enable a plant to grow on another plant in a non-parasitic manner.
* Aerial prop roots develop from the branches and eventually reach the ground, providing additional support. Over time, many roots will come together to form what appears to be a trunk.

* The epiphytic roots of orchids develop a spongy tissue to absorb moisture and nutrients from any organic material on their roots.
* In screwpine, a palm-like tree that grows in sandy tropical soils, aerial roots develop to provide additional support that helps the tree remain upright in shifting sand and water conditions. 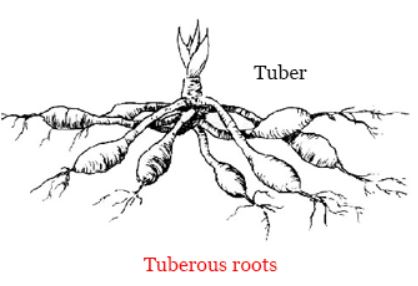 Tubers are various types of modified plant structures that are enlarged to store nutrients. They are used by plants to survive the winter or dry months, to provide energy and nutrients for regrowth during the next growing season, and as a means of asexual reproduction.

Key points
* A stem tuber forms from thickened rhizomes or stolons.
* The top sides of the tuber produce shoots that grow into typical stems and leaves and the under sides produce roots. They tend to form at the sides of the parent plant and are most often located near the soil surface.
* The below-ground stem tuber is normally a short-lived storage and regenerative organ developing from a shoot that branches off a mature plant.

* The offspring or new tubers, are attached to a parent tuber or form at the end of a hypogeogenous rhizome. 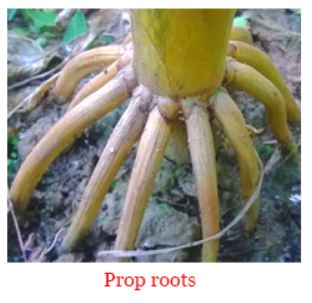 Aerial roots are roots above the ground. They also called buttress roots. They are almost always adventitious. They are found in diverse plant species, including epiphytes such as orchids, tropical coastal swamp trees such as mangroves, the resourceful banyan trees. 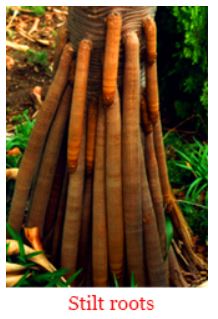 Stilt roots (Buttress roots or prop roots) are large roots on all sides of a shallowly rooted tree. Typically, they are found in nutrient-poor rainforest soils and do not penetrate to deeper layers. Almost all types of mangroves have these types of roots. They prevent the tree from falling over while also gathering more nutrients. 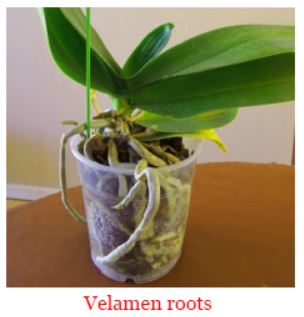 The velamen of an orchid is the white or gray covering of aerial roots. It is many cell layers thick and capable of absorbing atmospheric moisture and nutrients. Often, the roots of orchids are associated with symbiotic fungi or bacteria; the latter may fix nutrients from the air. This functionality allows the orchid to exist in locations that provide a reproductive or vegetative advantage such as improved exposure or reduced competition from other plant species.

The velamen arises from the root tip by division of a special tissue. The dead cells of velamen diffuse light, thus giving it a grey appearance--except at the tips, where the chlorophyll become visible. Upon absorbing water, the dead cells become transparent, and the whole velamen tissue then appears green. 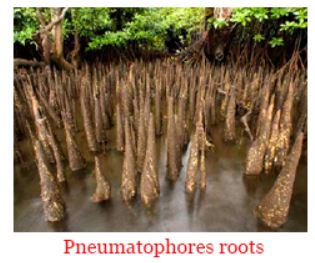 A terrestrial ventilative or respiratory root of some tropical woody plants. Pneumatophores characterize many trees that form mangrove forests, some palms, and the American bald cypress. Such plants grow on swampy soils with a poor oxygen content or along seashores that are flooded when the tide is in. Pneumatophores develop from subterranean roots or rhizomes and grow vertically, rising above the water or soil.
Their biological significance is mainly their supply of air to subterranean organs. This is promoted by the anatomic structure of pneumatophores:
* Their thin bark,
* Numerous lenticels
* System of air-bearing intercellular spaces.

An abundance of intercellular space often is responsible for the white color of pneumatophores. Plants that usually have pneumatophores do not form them when grown on soils that are not swampy. Thus, pneumatophores are absent in the bald cypress that is raised as an ornamental on the southern coast of the Crimea, in the Caucasus, and in Middle Asia. 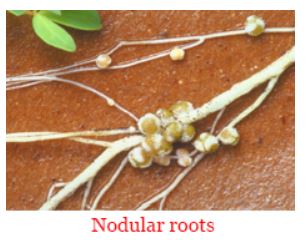 Root nodules occur on the roots of plants that associate with symbiotic nitrogen-fixing bacteria. Under nitrogen-limiting conditions, capable plants form a symbiotic relationship with a host-specific strain of bacteria known as rhizobia. 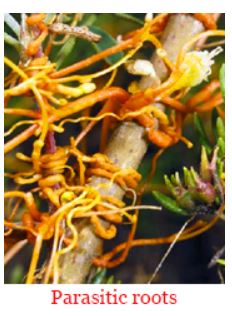 Parasitic flowering plants exploit other flowering plants for water and nutrients with the help of one or more haustoria. Part of the haustorium, the intrusive organ, penetrates host tissue to establish contact with the conductive tissue of the host. Introduced parasitic plants occur throughout the world, and some are considered invasive. They often cause considerable economic damage when attacking monocultures in agriculture, orchards, and forestry, and much effort is spent to avoid and control invasive, harmful parasitic plants.

Key points
* Parasitic plants have a modified root, the haustorium, that penetrates the host plant and connects to the xylem, phloem, or both.
* All parasitic plants have special organs, named haustoria, which connect them to the conductive system of their host and provide them with the ability to extract water and nutrient from the hosts.