Introduction:
Heat is energy in transfer other than as work or by transfer of matter. When there is a suitable physical pathway, heat flows from a hotter body to a colder one. The transfer results in a net increase in entropy. The pathway can be direct, as in conduction and radiation, or indirect, as in convective circulation.
Heat refers to a process of transfer between two systems, the system of interest, and its surroundings considered as a system, not to a state or property of a single system. If heat transfer is slow and continuous, so that the temperature of the system of interest remains well defined, it can be described by a process function.
If W is performed and heat produced is H then W/ H = J or W = JH
Where J is a constant called Mechanical Equivalent of Heat. Its value is 4.186 Joule/ Calorie. It means if 4.186 joule of work is performed, 1 calorie of heat is consumed.

Units of Heat:
C.G.S unit: Calorie = it is the amount of heat required to raise the temperature of 1 g of pure water through 1o C.

Temperature:
Temperature is that physical cause which decides the direction of flow of heat from one body to other body. Heat energy always flows from body at higher temperature to body at lower temperature.
A temperature is a comparative objective measure of hot and cold. It is measured, typically by a thermometer, through the bulk behavior of a thermometric material, detection of heat radiation, or by particle velocity or kinetic energy. It may be calibrated in any of various temperature scales, Celsius, Fahrenheit, Kelvin, etc.

Measurement of Temperature:
Thermometer: The device which measures the temperature of a body is called thermometer.

Thermal Expansion:
Thermal expansion is the tendency of matter to change in volume in response to a change in temperature, through heat transfer.
Temperature is a monotonic function of the average molecular kinetic energy of a substance. When a substance is heated, the kinetic energy of its molecules increases. Thus, the molecules begin moving more and usually maintain a greater average separation. Materials which contract with increasing temperature are unusual; this effect is limited in size, and only occur within limited temperature ranges. The degree of expansion divided by the change in temperature is called the material's coefficient of thermal expansion and generally varies with temperature.

Transmission of Head:
The transfer of heat from one place to other place is called transmission of heat. There are three modes of heat transfer
i. Conduction
ii. Convection
iii. Radiation

Radiation:
In this method transfer of heat takes place with the speed of light without affecting the intervening medium.
All objects give out and take in thermal radiation, which is also called infrared radiation. The hotter an object is, the more infrared radiation it emits.
Infrared radiation is a type of electromagnetic radiation that involves waves. No particles are involved, unlike in the processes of conduction and convection, so radiation can even work through the vacuum of space. This is why we can still feel the heat of the Sun, although it is 150 million km away from the Earth.

Newton’s law of cooling:
The rate of loss of heat by a body is directly proportional to the difference in temperature between the body and the surrounding.
Temperature difference in any situation results from energy flow into a system or energy flow from a system to surroundings. The former leads to heating, whereas latter leads to cooling of an object. Newton’s Law of Cooling states that the rate of temperature of the body is proportional to the difference between the temperature of the body and that of the surrounding medium. This statement leads to the classic equation of exponential decline over time which can be applied to many phenomena in science and engineering, including the discharge of a capacitor and the decay in radioactivity.
Newton's Law of Cooling is useful for studying water heating because it can tell us how fast the hot water in pipes cools off. A practical application is that it can tell us how fast a water heater cools down if you turn off the breaker when you go on vacation.
Suppose that a body with initial temperature T1o C, is allowed to cool in air which is maintained at a constant at a constant temperature T2o C.
Let the temperature of the body be To C at time t.
Then by Newton’s Law of Cooling,

Stefan’s law:
The thermal energy radiated by a blackbody radiator per second per unit area is proportional to the fourth power of the absolute temperature and is given by
E = σ T4
The Greek letter sigma (σ) representing the constant of proportionality, called the Stefan–Boltzmann constant. This constant has the value 5.6704 × 10-8 watt per metre2.K4. The law applies only to blackbodies, theoretical surfaces that absorb all incident heat radiation.

Change of State
Any material can remain in any of its three states (solid, liquid and gas). To change the substance from one state to other state is called change of state. For this either substance is heated or heat is extracted from the substance. 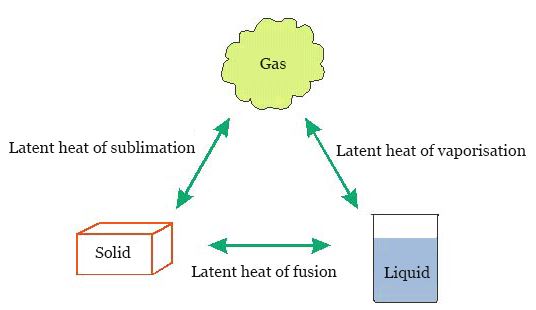 Vaporization:
The process by which a substance is changed from liquid state to vapour state is called vapourisation.

Boiling:
When a liquid is heated, it eventually reaches a temperature at which the vapor pressure is large enough that bubbles form inside the body of the liquid. This temperature is called the boiling point. Once the liquid starts to boil, the temperature remains constant until all of the liquid has been converted to a gas.
The normal boiling point of water is 100oC. But if you try to cook an egg in boiling water while camping in the Rocky Mountains at an elevation of 10,000 feet, you will find that it takes longer for the egg to cook because water boils at only 90ºC at this elevation.

Latent Heat or heat of transformation:
Latent heat, characteristic amount of energy absorbed or released by a substance during a change in its physical state that occurs without changing its temperature.
The latent heat associated with melting a solid or freezing a liquid is called the heat of fusion; that associated with vaporizing a liquid or a solid or condensing a vapour is called the heat of vaporization. The latent heat is normally expressed as the amount of heat (in units of joules or calories) per mole or unit mass of the substance undergoing a change of state.
For example, when a pot of water is kept boiling, the temperature remains at 100oC (212oF) until the last drop evaporates, because all the heat being added to the liquid is absorbed as latent heat of vaporization and carried away by the escaping vapour molecules. Similarly, while ice melts, it remains at 0oC (32oF), and the liquid water that is formed with the latent heat of fusion is also at 0oC. The heat of fusion for water at 0oC is approximately 334 joules (80 calories) per gram, and the heat of vaporization at 100oC is about 2,260 joules (540 calories) per gram. Because the heat of vaporization is so large, steam carries a great deal of thermal energy that is released when it condenses, making water an excellent working fluid for heat engines.

Sublimation:
Sublimation is the term for when matter undergoes a phase transition directly from a solid to gaseous form, or vapor, without passing through the more common liquid phase between the two. It is a specific case of vaporization.
The most well known example of a material that undergoes sublimation is dry ice, or frozen carbon dioxide.

Air conditioning:
For healthy and favorable atmosphere of human being, the conditions are as follows:
i. Temperature: from 23ºoC to 25oC.
ii. Relative humidity: from 60% to 65%.
iii. Speed of air: from 0.75 meter/minute to 2.5 meter/minute.

Kelvin’s Statement:
Whole of the heat can never be converted into work.

Clausius statement: heat by itself cannot flow form a colder body to a hotter body.

Heat engine may be divided into two types:
i. Internal combustion Engine: In this engine, heat is produced in the engine itself.
Example: Otto engine or petrol engine (efficiency = 52%), Diesel engine (efficiency = 64%).
ii. External Combustion Engine: In this engine heat is produced outside the engine. Steam engine is an example of external combustion engine. (Efficiency = 20%).
Refrigerator Heat Pump: A refrigerator is an apparatus which transfers heat energy from cold to a hot body at the expanse of energy supplied by an external agent. The working substance is called refrigerant.
In actual refrigerator, vapours of Freon (CCI2F2) acts as refrigerant.