Why should we study English pronunciation?

It is because; pronunciation is virtually the biggest thing that people notice about our English.
We should study it, even if we think we can already communicate in English.
Language has a very important social purpose because it is mainly used for linguistic communication. Linguistics is a systematic study of language. Phonetics is a branch of linguistics and it is the branch dealing with the medium of speech. To say, it deals with the production, transmission and reception of the sounds of human speech.
ఏ భాషకైనా ఉచ్ఛారణ ముఖ్యమైనది. ఇంగ్లీష్ విషయంలో ఇది మరింత ప్రస్ఫుటం. 26 అక్షరాలున్న ఇంగ్లీష్‌లో లక్షలాది పదాలున్నాయి. ఈ పదాలన్నీ దాని వర్ణమాల నుంచి ఏర్పడినవే. ఒక భాష వర్ణమాల ధ్వనులను సూచిస్తుంది. క్రమంతో కూడిన ధ్వనుల సమాహారమే ఉచ్ఛారణ. అయితే ఇంగ్లీష్‌కు సంబంధించినంత వరకు దాని ఉచ్ఛారణ వైవిధ్యానికి ప్రతీక. దానిపై పట్టు సాధించడానికి ఇంగ్లిష్ ఉచ్ఛారణాశాస్త్ర అధ్యయనం అవసరం.
ఇంగ్లిష్ వర్ణమాలలోని 26 అక్షరాలను అచ్చులు, హల్లులుగా విభజిస్తే అయిదు అచ్చులు, 21 హల్లులుగా చూడొచ్చు.
విశేషమేంటంటే 5 అచ్చులకు 20 ధ్వనులు, 21 హల్లులకు 24 ధ్వనులు వెరసి 26 అక్షరాలకు 44 ధ్వనులు ఉన్నాయి. ఒక అక్షరానికి ఒకే స్థిరమైన ధ్వని అనే పద్ధతి లేని కారణంగా ఇంగ్లిష్ గ్రామర్ సిలబస్‌లో ఫొనెటిక్ ట్రాన్స్‌క్రిప్షన్ అధ్యయనాన్ని ఒక అంశంగా చేర్చారు.
26 అక్షరాలకు ఉన్న 44 ధ్వనులను సూచించే ఫొనెటిక్ సింబల్స్‌ను తెలుసుకోవాలి. ఆ పరిజ్ఞానంతో ఫొనెటిక్ ట్రాన్స్‌క్రిష్షన్ రూపంలోనున్న ఇంగ్లిష్ పదాలను వెంటనే గుర్తుపట్టొచ్చు. ఆ దిశగా విద్యార్థిని సమాయత్తం చేయడం కోసం మోనోథాంగ్స్, డిప్తాంగ్, కాన్పోనెంట్స్ ధ్వనులను సూచించే సంకేతాల జాబితాలు ఇదిగో మీకోసం.
A language can be used in two ways for the purposes of communication. It can be spoken or written. The medium of speech is more important than the medium of writing. Speech comes first in the history of any individual. Written language is only an attempt to represent, using marks on paper, the sounds used in spoken language.
Incidentally, in every language, a letter of the alphabet represents a particular sound. But to our surprise, in a language like English, a letter of the alphabet at times represents more than one sound. So, the problems of communication primarily concerned with speech accounts to the study of linguistics.
Linguistics is a systematic study of language. Phonetics is a branch of linguistics dealing with the medium of speech. Phonemic symbols are enclosed within slant lines.
Speech sounds in English are categorized into two groups called vowels and consonants. The letters a, e, i, o, u are considered vowels, all together with 20 distinct sounds. Therefore, the definition of a vowel in terms of letters of the alphabet is to be rejected. A vowel is a voiced sound in the production of which there is no obstruction anywhere through its passage from the lungs. A diphthong is a combination of two vowel sounds (e.g. f e a r).
A consonant is a voiced or voiceless sound in the production of which the obstruction is either partial or complete (/p/, /b/). No amount of theoretical knowledge will help us produce the vowel sound with perfection. The best way of learning the English vowels is to listen to from a standard resource and then imitate.
In several languages, there is no one-to-one correspondence between the letters of the alphabet and the sounds they represent, English being a notorious example. For instance, the letter ‘c’ represents a certain sound in the word ‘scale’ and the same letter represents a different sound in ‘cease’. Further, how many unnecessary letters are there in the English word ‘q u e u e’.
However, when speaking to native speakers, we are often surprised at how the phonetic transcriptions seem to not always match pronunciation used in connected speech. This is in great part due to the fact that English is a time stressed language, as opposed to a syllabic language. This manner of speaking greatly influences, and sometimes even changes, the pronunciation of single words. Phonetic transcription (phonetic notation) is the visual system of symbolization of the sounds occurring in spoken human language.
Phonetic Transcription is a useful device using which such difficulties can be avoided. There is an alphabet called the International Phonetic Alphabet (IPA) which has symbols to represent all the sounds that exist in the languages of the world. It is used to transcribe words i.e. to put down in writing what exactly one pronounces. It can help improve our understanding of the importance of connected speech, when speaking English. Dictionaries give single word phonetic transcriptions which can greatly improve our pronunciation skills.
There are 26 letters in the English alphabet while Spoken English has 44 speech sounds. These speech sounds include vowels and consonants.
There are 20 vowel sounds in English represented by 5 vowel letters: a, e, i, o, u.
Twelve (12) of these 20 vowel sounds are PURE VOWELS (Monopthongs) and the remaining Eight (8) are VOWEL GLIDES (Diphthongs).
There are 24 Consonant Sounds in English represented by 21 consonant letters. All the consonants in English, except a few, are produced almost the same way as in Indian languages.

Received Pronunciation [RP] refers to the accent used by such people as the Royal Family, BBC newsreaders, and members of the upper class. It refers entirely to accent and not to content. RP is a speech style which is based on social class and not on geographical region.
Remember, RP is not the same thing as Standard English. The phrase Received Pronunciation was coined in 1869 by the linguist, A J Ellis, but it only became a widely used term used to describe the accent of the social elite after the phonetician, Daniel
Jones, adopted it for the second edition of the English Pronouncing Dictionary (1924).
The definition of ‘received’ conveys its original meaning of ‘accepted’ or ‘approved’ — as in ‘received wisdom’
Vowels: The vowels are listed below with illustration of their occurrence in the initial,
medial and final positions. A dash indicates the non-occurrence of the vowels in that position. 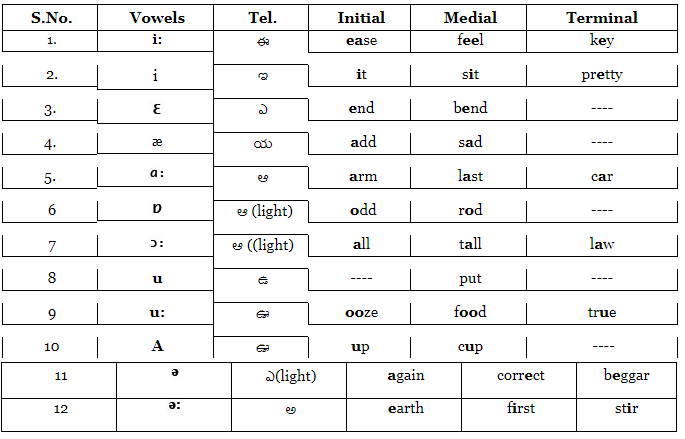 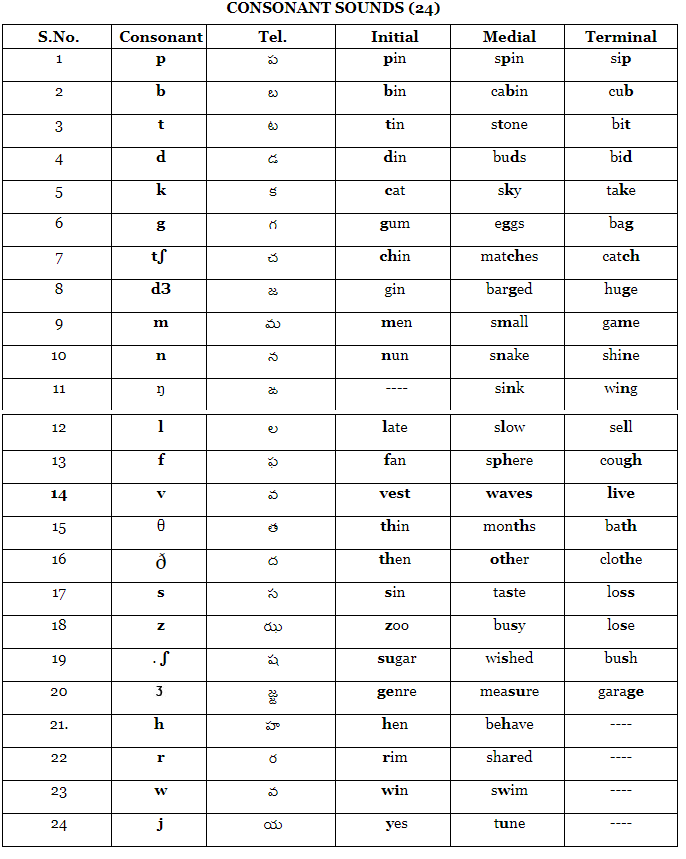 With the help of the phonetic script of the vowels and the consonants of English language offered in the tables given above, we can transcribe the English words into their corresponding phonemes and vice versa.
There are certain factors that contribute to our faulty pronunciation with our English:
* For one thing, we have already internalized the basic speech patterns of our mother tongue and naturally they interfere in our learning of a new language. We speak English with our native accent.
* The next factor is that there is little correspondence between the symbol and the sound in English. In short, English is not written exactly as it is spoken. For example, ch has three distinctly different sounds as in chair, mechanic and machine. The knowledge of this factor helps you locate odd sounds in a given sets of words with respect to the underlined letters in each of the words found in each of the sets.
* Another peculiarity of the English language lies in its stress and intonation patterns. There are no specific rules governing monosyllabic, disyllabic, and trisyllabic or polysyllabic words. Every stress rule has exceptions as well. Stress plays an important role in English speech.
Without proper stress a person’s speech may pose several difficulties for the listeners. Stress and intonation blend together to lend charm to English speech. Intonation means variation of voice or pitch, which also speaks the attitude of the speaker.
As you probably know, phonetic symbols are a great help when it comes to learning to pronounce English words correctly. When you open a dictionary, you can find the correct pronunciation of words, you don't know by looking at the phonetic pronunciation that follows the word. Unfortunately, learning the phonetic alphabet is not always the easiest thing to do.
In English, as we certainly know, many words can have the same pronunciation but be written differently with different meanings. For example "to, two, and too" which all have the phonetic transcription /tu/. Sometimes, words can be written similarly but have different pronunciations as in the "ough" combinations thought, though, bough, and through. Another factor in pronunciation is how the word is stressed. Understanding the phonetic alphabet can greatly simplify the learning process, especially for students who do not have the opportunity to work with a teacher. In a strict linguistic sense, transcription is the process of matching the sounds of human speech to special written symbols using a set of exact rules, so that these sounds can be reproduced later.