Literature - Study of Literary Forms - Poetry (The Lyric, The Elegy, The Ode, The Sonnet)

Some enchanting expressions regarding "Poetry":

* Painting is silent poetry, and poetry is painting that speaks. - Plutarch
* Poetry is the spontaneous overflow of powerful feelings. - Wordsworth
* Poetry is the language of the imaginations and passions. - Hazlitt
* Poetry is... the best words in the best order - S.T. Coleridge
'The crown of literature is poetry' - Somerset Maugham
Poetry, Prose and Drama are the three major forms of literature. Poetry, is perhaps, the oldest literary form. The true content of poetry is imaginative and emotional. It is a kind of rhythmic compressed language that uses figures of speech and imagery designed to appeal to readers' emotions and imaginations.

* Broadly speaking poetry may be divided into two kinds.

The lyric is a short musical composition of Greek origin. Originally it was meant to be sung by a single singer to the accompaniment of a 'lyre' (a stringed musical instrument.)
* The term 'lyric' is now used for any fairly short non-narrative poem uttered by a single speaker, who expresses a state of mind or a process or perception, thought and feeling.
* It is a short poem characterised by simplicity in language and treatment.
* It deals with a single emotion which is generally stated in the first few lines.
* The last and concluding part is in the nature of summary or it embodies the conclusions reached by the poet.
* The lyric is uttered in the first person. The 'I' need not be the poet who wrote it.
* Spontaniety is another characteristic quality of a lyric. The poet sings in an unpremeditated art. He sings effortlessly.
* Shelly is the supreme lyricist of the romantic age. "He exhales a lyric as a flower exhales fragrance."

The elegy has its origin in Ancient Greece. The elegy is an expression of the emotion of sorrow, woe or despair. In short it is a lament, a lyric of mourning or an utterance of personal bereavement and sorrow and therefore it should be characterised by absolute sincerity of emotion and expression.
* In common use, it is often restricted to a lament over the dead. The lament may be over place, over lost love, over the past, over an individual's misery or failure.
* The Greeks judged the elegy by its form and not by its subject matter.
* But the English elegy takes its name from its subject matter not from its form. The theme is mournful or meditative.
* It is by the large a lamentation for the dead.

This is a special kind of elegy. The word 'pastoral' comes from the Greek word 'Pastor' which means to graze. Hence pastoral elegy is an elegy in which the poet represents himself as a shepherd mourning the death of a fellow shepherd.
* The form arose among the ancient Greeks. In ancient Rome it was used by the Latin poet 'Virgil'.
* In England countless pastoral elegies have been written down from the Renaissance (16th Century) to the present day.
* The pastoral elegy is a work of art, following a particular convention and using a particular imagery drawn from rural life and rural scenery. 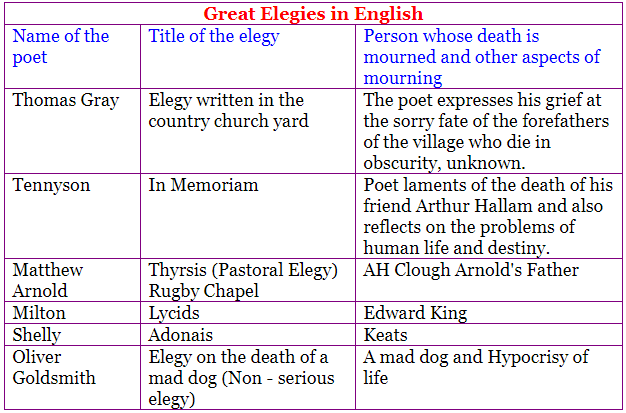 The Greek word 'Ode' means a song. It originated in Greece. The ode is a special kind of lyric, more dignified, stately and elaborate than the simple lyric.
* The Greek poet Pindar was the first to write odes and then followed by the Roman poet Horace.
* The ode was used by the Greeks for any kind of lyric verse.
* An English ode may be defined as a "Lyric Poem of elaborate metrical (the rhythm) structure, solemn in tone and usually taking the form of address very often to some abstraction or quality."
* It is in the form of an address. It is not written about but written to.
Eg: Thou still unravished bride of quietness (Ode on Grecian Urn) 'O' wild West wind, thou breath of Autumn's being (Ode to West - Wind)
* It has lyric enthusiasm and emotional intensity.
* Its theme is dignified and exalted. It has high seriousness.
* The development thought is logical and clear.
* The metrical pattern may be regular or irregular.
* There are two kinds of odes
1) Pindaric ode         2) Horatian ode.

* Horatian Ode on the other hand is named after the Roman Latin poet Horace who imitated Pindar.
* Horatian ode consists of a number of stanzas with a more or less regular metrical structure but without any division into triads of the Pindaric.
* Horatian ode may be rhymed on unrhymed.

THE SONNET
The sonnet is one of the forms of lyric. It expresses a single thought or idea or feeling. The word 'sonnet' is derived from the Italian word 'sonneto' meaning 'a sound'. It is a short lyric of fourteen lines and the Italian poet Petrarch was the first to use this form to express his love.
* Petrarch had divided his sonnets into two parts, the 'octave' of eight lines and the 'sestet' of six lines with a 'ceasura' or pause.
* Its rhyme scheme was ab ba, ab ba (Octave) and cde cde (Sestet)
* The English Sonnet: Sir Thomas Wyatt was the first to write sonnets in England. He followed the model of Petrarch. Then the Earl of Surrey wrote early sonnets in the first part of the 16th century.
* The Elizabethan Sonnet: Sir Philip Sydney, Spenser and others experimented with the sonnet. They introduced a variety of changes in the arrangement of rhymes. The central pause was abolished.
* Shakespearean Sonnets: The Shakespearean sonnet is made up of three deea (10) Syllabic quatrains (4 lines) rhyming alternatively followed and concluded by a couplet (2 lines).
* The rhyme scheme is ab ab, cd cd, ef ef and gg.
* Shakespeare worked into a degree of perfection which has never been supposed in any language. His sonnets were first published in 1609.
* Milton's Contribution: In the post Elizabethan era there was no great writer of sonnets till John Milton.
* Milton revived the sonnet form but he considerably widened and enlarged its score.
* Milton's English sonnets were 23.