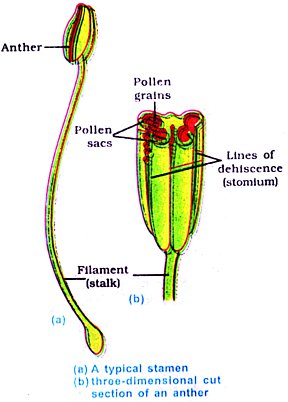 Important concepts :
¤ The study of nature and development of the structures and processes associated with sexual reproduction in angiosperms is called "Embryology".
Stamen, Microsporangium and Pollen grain:
¤ Stamen is a part of the flower with long slender filament and a pollen producing anther.
¤ The anther is dithecous in plants like Datura and monothecous in Hibiscus.
¤ Each bilobed or dithecous anther shows four microsporangia.
¤ Each microsporangium is surrounded by four wall layers epidermis, endothecium, middle layers and tapetum.
¤ The process of development of haploid microspores from sporogenous tissue of microsporangium is called "microsporogenesis".
¤ Microspores are also called pollen grains and represent male gametophytes.
¤ Each pollen grain is surrounded by a two layered wall with outer exine and inner intine.
¤ The exine is made up of most resistant organic material sporopollenin.
¤ Intine is made up of cellulose and pectin.
¤ Pollen grains are released from the anther by dehiscence either at two celled stage (1 vegetative cell and 1 generative cell) or at three celled stage (1 vegetative cell and two male gametes).
¤ Pollen grains of some plants cause allergies.
¤ Pollen grains can be stored in liquid nitrogen at -1960 C. Such stored pollen can be used as pollen banks in crop breeding programmes.

Pistil, Megasporangium and Embryo sac:
¤ If a flower shows a single pistil it is called monocarpellary, more than one pistil multicarpellary, if the pistils are fused syncarpous, if they are fused apocarpous.
¤ Each pistil has three parts, ovary, style and stigma.
¤ The ovary encloses one or more ovules which may be orthotropous (erect ovule), anatropous (inverted ovule) or campylotropous ovule (right angled ovule).
¤ Each ovule is covered by one or two integuments with a micropyle enclosing the diploid tissue nucellus.
¤ The process of formation of megaspores from a megaspore mother cell by meiosis in the nucellus is called megasporogenesis. 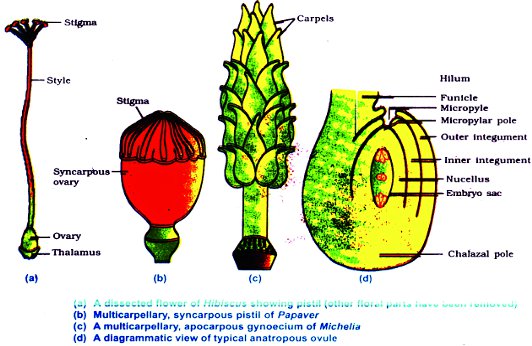 ¤ The megaspore divides by mitosis to form a 8 nucleated and 7 celled embryo sac which is also called female gametophyte.
¤ The embryo sac contain an egg apparatus with an egg cell and two synergids, three antipodals, and a central cell with two polar nuclei.

Pollination:
¤ Transfer of pollen grains from the anther to the stigma of a pistil is called pollination.
¤ Pollination is of two types:
1. Autogamy: Pollination achieved within the same flower.
2. Cross pollination: Pollination between two flowers. 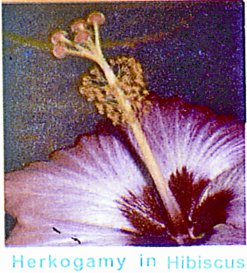 ¤ Heterostyly: Styles of the flowers in different heights in the same species. e.g.: Primula.
¤ Self sterility: Inhibition of pollen germination on the pistil. e.g.:  Abutilon.

Pollen-pistil interaction:
¤ Pollination occurs only when pollen and pistil show compatibility.
¤ The pollen tube is produced by the pollen grain on the stigma and reaches the ovule through the style.
¤ The pollen tube may enter the embryo sac by porogamy, chalazogamy or mesogamy.
¤ Artificial hybridization is used for crop improvement.

Endosperm
Other floral parts like stamens, petals and sepals  fall off
¤ Endosperm develops from PEN (primary endosperm nucleus) and helps in nourishing the growing embryo.
¤ The seeds with endosperm are called endospermic seeds. e.g.: Castor, Coconut.
¤ The seeds without endosperm are called non-endospermic seeds. e.g.: Beans and Peas.
¤ The zygote gives rise to proembryo and then to a mature embryo.
¤ A dicot embryo shows embryonal axis, two cotyledons, epicotyl, hypocotyl, plumule and radical.
¤ A monocot embryo shows embryonal axis, one cotyledon called scutellum, coleorhiza and coleoptiles.
¤ The persistent nucellus in some seeds is referred to as perisperm.
¤ The production of seeds without fertilization is apomixis.
¤ The production of fruits from the ovary without fertilization is parthenocarpy.
¤ Production of more than one embryo in a seed is called polyembryony.

Chemistry is not a mystery

Chemistry is not a mystery if you understand

Immerse yourself and be confident

English is a simple and easy language in

Conceptual clarity is important to score

Botany is an integral part of Natural Sciences,