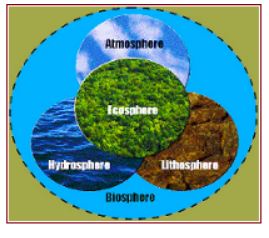 The biosphere is a life supporting layer which surrounds the earth and makes plant and animal life possible without any protective device. The biosphere consists of all the living organisms, energy and physical environment and there are continuous interactions between living organisms and physical environment and among the living organisms themselves.
Origin and use of the term
The term "biosphere" was coined by geologist Eduard Suess in 1875, which he defined as The place on Earth's surface where life dwells. It is an indication of the effect of both Charles Darwin and Matthew F. Maury on the Earth sciences. It is an interdisciplinary concept for integrating astronomy, geophysics, meteorology, biogeography, evolution, geology, geochemistry, hydrology generally speaking, all life and Earth sciences.

Lithosphere
* The solid portion of the earth is called the lithosphere.
* It comprises the rocks of the Earth’s crust and the thin layers of soil that contain nutrient elements which sustain organisms.

Hydrosphere
* The earth is called the blue planet, more than 71 percent of earth is covered with water and 29 percent is with land.
* Hydrosphere consists of water in all its forms.
* As running water in oceans and rivers and in lakes, ice glaciers, underground water and the water-vapour in the atmosphere, all comprise the hydrosphere.
* More than 97 percent of Earth’s water is found in the oceans and is too salty for human use.
* A large proportion of the rest of the water is in the form of ice sheets and glaciers or under-ground and a very small percentage is available as fresh water for human.

Latitude and longitude
* Imaginary line running on the global divides it into two equal parts.
* This line is known as the equator.
* The northern half of the earth is known as the northern hemisphere and the southern half is known as the southern hemisphere.
* They are both equal halves.
* The equator represents the zero degree latitude.
* All parallels north of the equator are called north latitudes. Similarly all parallels south of the equator are called south latitudes.
* The line running from the north pole to the South Pole.
* These lines of reference are called the meridians of longitude.
* All meridians are of equal length.

Local time zones
* If each town were to keep the time of its own meridian, there would be much difference in local time between one town and the other.
* In larger countries such as Canada, USA, China, India and USSR the confusion arising from the differences alone would drive the people mad.
* To avoid all these difficulties, a system of STANDARD TIME is observed by all countries. Most countries adopt their standard time from the central meridian of their countries. The Indian Government has accepted the meridian of 82.5 degrees east for the standard time which is 5 hours 30 mins ahead of Greenwich Mean Time.
* Larger countries like USA ,Canada and USSR which have a great east-west stretch have to adopt several time zones for practical purposes. USSR the largest country, which extends through almost 165 degrees of longitude is divided into eleven time zones.
* Canada and USA have five zones the Atlantic, Eastern, central, Mountain and Pacific Time zones.
* The difference between the local time of the Atlantic and the pacific coasts is nearly five hours.

Heat zones of the earth 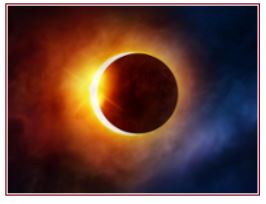 Eclipses
Solar Eclipse: A Solar Eclipse occurs between sunrise and sunset on new moon when the moon passes directly in front of the sun so that its shadow lies on the earth. In other words, the moon lies between the sun and the earth.
Lunar Eclipse:
The Lunar Eclipse takes place when the earth comes in between the sun and the moon so that the shadow of the earth is cast on the moon. A Lunar takes place on a full moon.
Atmosphere:
* The earth is surrounded by a layer of gas called the atmosphere. This thin blanket of air is an integral and important aspect of the planet.
* It provides us with the air we breathe and protect us from the harmful effects of the sun’s rays.
* The atmosphere extends up to a height 1600 kilometers.
* The atmosphere is composed mainly of nitrogen and oxygen which makes up to 99 percent clean dry air.
* Nitrogen 78%, oxygen 21% and other gases like carbon dioxide, Argon and other comprise 1 percent by volume. Oxygen is the breath of life while nitrogen helps in growth of living organisms. Carbon dioxide though present in minute amount is important as it absorbs heat radiated by the earth, there by keeping the planet warm. It is also essential for the growth of plants.

Stratosphere
* This is the second layer of the atmosphere.
* It extends from the tropopause the about 50km.
* Temperature increases due to the absorption of the ultraviolet radiation of the sun by ozone present in this layer.
* The temperature slowly increases to 4 degree centigrade. This layer is free from clouds and associated weather phenomena.
* Hence, it provides ideal flying conditions for large jet planes. At about 50 km the temperature begins to fall again. This marks the end of the stratosphere. The end of the stratosphere is called the stratopause.

Mesosphere
* Above the stratosphere lies the mesosphere. The mesosphere extends to a height of 80 km.
* Here the temperature decreases again, falling as low as -90 degree centigrade. The end of this layer is known as the mesopause.

Thermosphere
* The thermosphere lies above the mesosphere.
* This layer extends to a height of about 640 km.
* In this layer temperature rises dramatically, reaching up to 1480 degree centigrade.
* This increase in temperature also protects us from meteors and obsolete satellites; because it’s high temperature burns up nearly all the debris coming towards the Earth.