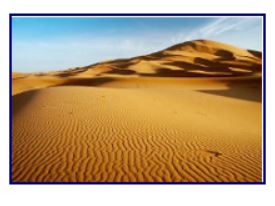 Deserts are the areas that are absolutely barren and where nothing grows at all. Some deserts are rocky, others are stony and the rest are sandy. All these are limited within the 15° to 30° parallels of North and South latitudes of the Equator.
e.g: The great Sahara Desert, Thar Desert, The Atacama Desert.
There are 5 distinct kinds of desert landscape. They are
1. Hamada or Rocky Desert: These deserts consists of stretches of bare rocks which is clear of sand and dust and the rocks are thoroughly polished and smoothed.
e.g.: Hamada el Homra desert in Libya.
2. Reg or Stony Desert: These deserts composed of extensive sheets of pebbles and gravels which the winds are unable to blow off and these are much more accessible than sandy deserts. The large herds of camels are kept here.
* In Africa, stony deserts are called Reg.
* In Libya and Egypt, these are called as Seirr.

3. Erg or Sandy Desert: These are the seas of sand in which winds deposit vast stretches of ware − like sand − dunes. The fine patterns of ripples on the dune surfaces indicate the direction of the winds.
* In Turkestan, sandy deserts are also known as Koum.
4. Bad lands: Bad lands are the hills which were badly eroded by the occasional rainstorms into gullies and the extent of water action was so great. No inhabitants were seen here.
e.g.: Painted desert of Arizona.
5. Mountain Deserts: Deserts are found on plateaus and mountain ranges which were formed due to the action of erosion, frost.
e.g.: Ahaggar mountains and Tibesti mountains in the Sahara Desert.
Land Forms of Wind Deposition in Deserts:
1. Dunes: Dunes are hills of sand formed by the accumulation of sand and shaped by the movement of winds and these may be on the move or fixed. Due to the variations in shape, size & alignment, they have been given a long list of fanciful names like attached due or head dune, tail dune, advanced dune, lateral dune, weak dune, star dune, pyramidal dune, sword dune, hairpin dune, smoking dune... etc., These dunes are of two types. They are
(a) Barchan: These are moon shaped dunes which occur individually or in groups. Barchans are initiated by accumulation of sand at an obstacle like a patch of grass or a heap of rocks. They differ in height. They vary from 25 feet measuring upto 100 feet high.

(b) Serfs or longitudinal dunes: Serf is an Arabic word which means Sword. These dunes may attain a height of over 200 feet high. Due to clouds, these can tend to increase their height and width. These are found in Sahara desert and the Thar deserts.
2. Loess: The fine dust blown beyond the desert limits is deposited on neighbouring lands known as Loess.
* It is a yellow, friable material and is very fertile and is extremely porous.
* These deposits have accumulated to a depth of 200 to 500 feet.
* In China, these are termed as Hwangtu the yellow Earth.
* In some parts of Germany, France & Belgium it is known as Limon.
* In North America it is termed as Adobe.
Land forms of Wind Erosion in Deserts
1. Mushroom Rocks: The rock pillars will be eroded near their bases where the friction is greatest and it produces rocks of mushroom shape are known as Mushroom rocks.
These are named as Gour in the Sahara desert.
2. Zeugen: These are tabular masses which have a layer of soft rocks lying beneath a surface layer of more resistant rocks and these are formed due to wind abrasions. Due to these, deep furrows are developed.
* The hard rocks which stand above these Zeugen will hang as they stand 10 to 100 feet.
3. Yardangs: Yardangs are quite similar to Zeugens but are vertical bands. These rises to
25 − 50 feet.
* These are commonly found in the Atacama desert, Chile.
4. Mesas and Buttes: Mesa is a Spanish word meaning table. It is a flat, table like denudation through the ages may reduce mesas so that they become isolated flat − topped hills known as Buttes.
5. Inselberg: It is a German word meaning Island Mountain and these are isolated residual hills rising suddenly from the level ground.
* These are composed of granite, and these are round topped with steep slopes.
Ex: Landscapes in Northern Nigeria, Western Australia & The Kalhari Desert.
6. Ventifacts or Dreikanter: These are pebbels formed by sand − blasting, which are dependent on wind direction. If wind direction changes, then the pebble formation also differs.
7. Deflation hollows: Due to the blowing of winds, the unconsolidated material will blow away forming small depressions and water seeps out forming Oases in the hollows. Sometimes, during the strong winds natural vegetation was also deflated as dust−storms and it is known as the Great Dust Bowl.