The Earth: The Earth is the third nearest planet to the sun and it is the fifth largest planet in size. It is slightly flattened at the poles.
* Its shape is described as a Geoid, means Earth−like shape. Conditions favourable to support life are probably found only on the Earth and it is neither too hot nor too cold. It has water and air which consists of life−supporting gases like Oxygen. Due to these reasons, the Earth is a unique planet in the solar system.
From the outer space, the earth appears blue because its two−thirds surface is covered by water. Hence it is called a Blue-Planet.
* The earth is made up of several concentric layers. They are
* Crust, the outer layer known as Lithosphere.
* Mantle, the layer beneath the crust known as Mesosphere.
* Core, the interior layer known as Barysphere.

Lithosphere: It lies in the outer layer of the Earth i.e., crust which comprises two distinct parts. The upper part consists of gigantic rocks and forms the continents.
* Its main mineral constituents are Silica and Alumina, so it is collectively known as Sial.
* The lower part is a continuous zone of denser basaltic rocks' forming the ocean floors, comprises mainly silica, iron & magnesium which is collectively known as Sima.

Mesosphere: The layer beneath the crust/ Lithosphere is the Mesosphere composed mainly of vary dense rocks rich in Olivine which is the mineral of a very popular green germstone known of Peridot.
* This layer is about 1,800 miles thick.
* Some parts of the Earth's crust are immersed by oceans and seas known as Hydrosphere.
* Extending skywards for over 15 miles the Earth is enveloped by a mass of gases known as Atmosphere.

Barysphere:
The interior layer is the core with 2,160 miles in radius and it is mainly made up of Iron (Fe) with some Nickel (Ni) and is called Nife.
* The core is subject to extremely high pressure and under such conditions, the core could be expected to be in a liquid state.
* Biosphere is the narrow zone where we find land, water and air together, which contains all forms of life.

It is not possible to known exactly how the earth was formed about 4,500 million years ago, but from the evidence of volcanic eruptions, earthquake waves, deepmine operations and crystal boring, all the distinct layers of the Earth's surface and the whole formation of the earth are quite clear.

Rocks and Minerals
Rock
Any natural mass of mineral matter that makes up the Earth's crust is called a rock. Rocks can be of different colour, size and texture. Rocks form the basis for soil. There are three major types of rocks. They are.. 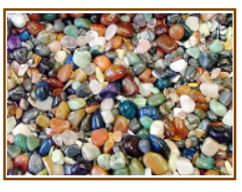 2. Sedimentary Rocks
Sediments: Rocks roll down, crack and hit each other and are broken down into small fragments. These are known as Sediments.
* These sediments are transported and deposited by wind, water, etc. These loose sediments are compressed and hardened to form layers of rocks. These types of rocks are called Sedimentary Rocks.
e.g.: Sandstone.
* These rocks may also contain fossils of plants, animals and other micro organisms that once lived on them.
* These rocks can change into metamorphic rocks under great heat and pressure.
e.g.: Clay changes into slate and limestone into marble.

3. Metamorphic Rocks:
Igneous of sedimentary rocks may become metamorphic or changed rocks under great heat and pressure.
e.g.: Sandstone converts into quartzite and coal into graphite. Their original character and appearance may be greatly altered by such forces particularly during intense earth movements.

Uses of Rocks
* Rocks are used for making roads, houses and buildings.
* These are also used in many games like seven stones (pitthoo), hop-scotch (stapu/ kit kat) and fire stones (gitti).
* Also useful in the construction of great monuments.

Minerals
A mineral is a naturally occuring organic and inorganic substance, having an orderly atomic structure and a definite chemical composition and physical properties.
* A mineral is composed of two or more elements.
* Single element minerals like sulphur, copper, silver, gold, graphite are found.
* There are atleast 2,000 minerals that have been named and identified in the earth crust.
* The major mineral groups are six known as major rock forming minerals.

Major Minerals
1. Feldspar
* Half of the earth's crust is composed of Feldspar.
* It has light cream to salmon pink colour.
* Silicon and Oxygen are common elements in all types of Feldspar.
* It is used in ceramics and glass making.

2. Quartz
* It is a hard mineral virtually insoluble in water.
* It consists of silica, and is the most important component of granite.
* It is white of colourless.
* It is used in radio and radar.

4. Amphibole
* Amphibole forms 7% of the earth's crust.
* It is in green of black colour.
* Aluminium, calcium, silicon, iron, magnesium are the major elements of amphiboles.
* It is used in asbestos industry.
* Hornblende is another form of amphiboles.

5. Mica
* It forms 4% the earth's crust.
* It is commonly found in igneous and metamorphic rocks.
* Potassium, aluminium, magnesium, iron, silica forms mica.
* It is used in electrical instruments.

6. Olivine
* Olivine is usually a greenish crystal and often found in basaltic rocks.
* Magnesium, Iron and silica are major elements of olivine.
* Olivine is used in Jewellery.
* Besides these major minerals, other minerals like barite, chlorite, calcite, magnetite, hematite, bauxite are also present in some quantities in the rocks.